Print article
United States of America
Legal updates: case law analysis and intelligence
In Top Tobacco LP v North Atlantic Operating Co Inc (Consolidated Oppositions Nos 91157248, 91157250 and 91180231, and Cancellation No 92043186, November 21 2011), the Trademark Trial and Appeal Board (TTAB) has refused registration of applicant North Atlantic Operating Co Inc’s mark CLASSIC AMERICAN BLEND in stylised form (pictured below) and as a word mark (with 'American blend' disclaimed in both applications) for tobacco and tobacco-related products in Class 34 of the Nice Classification based on opponent Top Tobacco LP's prior registration for CLASSIC CANADIAN for tobacco.

The TTAB, however, did not cancel North Atlantic’s registration for the mark ZIG ZAG CLASSIC AMERICAN BLEND, holding that the addition of 'Zig Zag' created a mark that was sufficiently dissimilar to CLASSIC CANADIAN as to make confusion unlikely.
In so deciding, the TTAB held that the opponent’s registered goods (“tobacco”) were legally identical to the applicant’s “smoking tobacco” and “loose tobacco” and closely related to its other goods, such as “cigarettes” and, as such, would be sold to the same class of purchasers through similar trade channels. North Atlantic attempted to argue that the parties’ consumers are sophisticated and would exercise a higher degree of control. The TTAB held that, while that was certainly possible, it was not necessarily the case.
North Atlantic also argued that there was extensive third-party use of marks containing the term 'classic' for tobacco-related products (and submitted third-party registrations as evidence) and that Top Tobacco’s CLASSIC CANADIAN mark was inherently weak because 'classic' is a highly suggestive term and 'Canadian' merely describes a tobacco style or blend. The TTAB noted that the purpose of introducing third-party use is to show that customers have been conditioned by the existence of many similar marks and thus have been educated to distinguish between minute distinctions between the marks. The TTAB held that, in this case, the record did not support such a conclusion because the third-party registrations did not provide evidence of the use of these marks in commerce (ie, there was no evidence as to the length of time the marks were used or their popularity).
The TTAB held that the mark CLASSIC CANADIAN was an inherently weak mark, and that such marks are often accorded a narrower scope of protection. However, in light of the fact that the goods were almost identical, the degree of similarity between the marks necessary to support likelihood of confusion declined. Since the marks both begin with the word 'classic', since they have similar syntax in that 'classic' is then followed by the name of a specialty blend (ie, 'Canadian' or 'American'), and since the applicant’s addition of the generic word 'blend' does little to distinguish the marks, the TTAB held these marks to be similar.
However, in evaluating North Atlantic’s mark ZIG ZAG CLASSIC AMERICAN BLEND, the TTAB commented that the addition of the distinctive house mark ZIG ZAG to the highly suggestive phrase was sufficient to outweigh the similarities.
In a second attempt to invalidate North Atlantic’s registration, the opponent also claimed that North Atlantic had failed to use its registered mark ZIG ZAG CLASSIC AMERICAN BLEND because the specimen submitted depicted the mark not as a single, contiguous mark, as shown below, since the elements 'Zig Zag' and 'Classic American Blend' are in radically different fonts and have the wording 'cigarette tobacco' separating them. 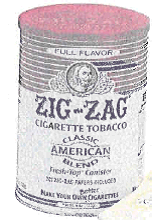 The TTAB disagreed, stating that the elements remained in relative proximity to each other and that the generic wording 'cigarette tobacco' did not impart or inject a separate commercial impression between the two elements.