Knife handle 'reminiscent of a dolphin' held to be invalid

In Reddig GmbH v Office for Harmonisation in the Internal Market (OHIM) (Case T-164/11, September 19 2012), the General Court has upheld a decision of the Second Board of Appeal of OHIM in which the latter had found that a three-dimensional (3D) Community trademark consisting of the shape of a knife handle was invalid. 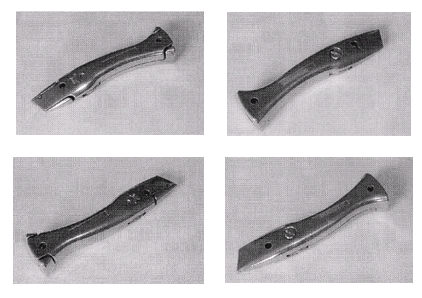 The invalidity action was upheld by both the Cancellation Division and the Second Board of Appeal of OHIM, which considered that, although the trademark included non-functional elements, in its essential characteristics it was exclusively constituted by the shape of the products necessary for obtaining the technical result (Article 7(1)(e)(ii) of the regulation).

On appeal, the owner of the mark argued before the General Court that:

The General Court upheld the decision of the Board of Appeal.

In addition, the General Court considered that the essential characteristics do not have to be determined on the basis of the overall impression produced by the mark, but may also be based on a detailed examination of each of the components of the sign concerned. Consequently, the Board of Appeal had not erred in finding that, although the knife handle at issue could be regarded as resembling a fish or a dolphin, the shape of the mark was due to characteristics having a technical function. The court pointed out that “the fact that the sum of the exclusively functional elements contributes to creating an ornamental image of a trademark of which the registration is sought is of no relevance to the possibility of registering a sign… as a Community trademark”.

This decision again demonstrates that it is extremely difficult to obtain protection for 3D trademarks under Community trademark law.