In Société des Produits Nestlé SA v Cadbury Holdings Ltd (Case R 513/2011-2), the Second Board of Appeal of the Office for Harmonisation in the Internal Market has overturned a decision of the Cancellation Division and found that the three-dimensional (3D) shape of Nestlé’s Kit Kat bar has acquired distinctiveness through use throughout the European Union.

The dispute related to Nestlé’s Community trademark registration for the 3D shape of its four-fingered Kit Kat biscuit bar. 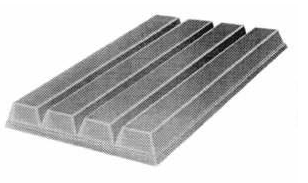 It is the latest in a history of trademark feuds between the confectionery giants and follows the decision of the English High Court in late 2012 which upheld the validity of Cadbury’s registration for the colour purple.

Following Cadbury’s cancellation proceedings which were initiated in 2007, the Cancellation Division found that Nestlé’s 3D mark, consisting of four trapezoidal bars aligned on a rectangular base registered in Class 30 of the Nice Classification for “sweets; bakery products, pastries, biscuits; cakes, waffles”, was devoid of distinctive character and had therefore been invalidly registered contrary to Article 7(1)(b) of the Community Trademark Regulation (207/2009). Nestlé appealed this decision and the Second Board of Appeal issued its finding on December 11 2012.

The Board of Appeal had to consider three key issues:


As the technical exception did not apply in this case, the board held that the 3D shape mark had acquired distinctiveness through use and overturned the decision of the Cancellation Division.