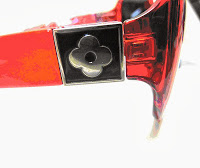 Justice Jessup had no problems deciding that the flower emblem featured on the sunglasses was deceptively similar to Louis Vuitton's registered flower logo trademark. However, His Honour found that the words 'Louis Vuitton' and 'Louis V' were not deceptively similar, saying that "a viewer of the words ['Louis V']… might initially think them a reference to Louis V of France" and that:

"[a]lthough the putative consumer of ordinary intelligence is assumed to have had some acquaintance with the [LOUIS VUITTON] mark, there is no assumption that or she… is so imbued with the imagery of the registered mark as to fall instantly into the state of deception to which [Section 120 of the Trademarks Act] refers."

While Justice Jessup may not be an aficionado of Louis Vuitton's fashion accessories, his comments regarding the necessity of supporting claims of reputation with suitable evidence were bang on the mark - although other commentators argue that the reputation of a trademark has no place whatsoever in trademark infringement proceedings (see Davison, Mark, "Reputation in Trademark Infringement: Why Some Courts Think it Matters and Why it Should Not" (2010). Federal Law Review, Vol 38, p 231, 2010; Monash University Faculty of Law Legal Studies Research Paper No 2010/26; available here).

"notoriously so ubiquitous and of such long standing that consumers generally must be taken to be so familiar with it and with its use in relation to particular goods or services [that the reputation of the trademark] is a relevant consideration" (C A Henschke & Co v Rosemount Estates Pty Ltd ((2000) 52 IPR 42 at 66-67)).

Justice Jessup, perhaps unsurprisingly, found that the two paragraphs were insufficient to establish the reputation of the LOUIS VUITTON trademark in Australia for the purpose of assessing the deceptive similarity of the signs.

Louis Vuitton is not the only trademark owner to fall into the trap of providing insufficient evidence to establish a trademark's reputation. In a trademark opposition case in New Zealand last year (Eastern Global Triumph Sdn Bhd v Société des Produits Nestlé SA ([2012] NZIPOTM 10)), Nestlé failed to provide sufficient evidence to prove that MILO was well known in New Zealand.

The message to take home is: brand owners should substantiate their brand's reputation with good evidence.