In Jaguar Land Rover Ltd v Office for Harmonisation in the Internal Market (OHIM) (T-629/14), the General Court has partially upheld a decision of the Second Board of Appeal of OHIM concerning the refusal of an application for registration of a three-dimensional (3D) sign consisting of the shape of a car as a Community trademark (CTM).

On November 30 2012 Jaguar Land Rover Ltd filed an application for the registration of a 3D sign as a CTM with OHIM. Registration was sought for the sign below: 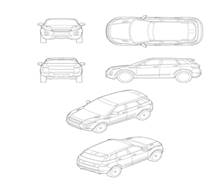 The goods in respect of which registration was sought were in Classes 12, 14 and 28 of the Nice Classification.

By decision of June 28 2013, the OHIM examiner, while allowing registration in Class 14, refused the application in respect of the goods in Classes 12 (“vehicles; apparatus for locomotion by land, air or water, ambulances, automobiles, cars, golf carts, electric vehicles, military vehicles for transport, motor homes, refrigerated vehicles, remote control vehicles, other than toys, sports cars, vans [vehicles], vehicles for locomotion by land, air, water or rail, automobile bodies, automobile chassis, automobile hoods, bodies for vehicles, hoods for vehicles, vehicle chassis, vehicle covers [shaped]”) and Class 28 (“games and playthings, games, radio-controlled toy vehicles, scale model kits [toys], scale model vehicles, toy vehicles, toys”) on the basis of Article 7(1)(b) of the Community Trademark Regulation (207/2009), on the ground that, with regard to those goods, the sign at issue was devoid of any distinctive character.

On August 20 2013 Jaguar filed a notice of appeal with OHIM.

By decision of April 24 2014, the Second Board of Appeal of OHIM annulled the examiner’s decision as regards “apparatus for locomotion by air or water” in Class 12, while dismissing the appeal as to the remainder. The board found, in particular, that none of the features visible on the representation of the mark applied for or claimed by the applicant departed significantly from the customary and usual shapes of cars. The mark applied for was merely another variation of a typical shape of a car and, therefore, devoid of distinctive character as regards the goods in Classes 12 and 28.

On April 24 2014 Jaguar brought an action before the General Court seeking the annulment of the board’s decision. In support of its action, Jaguar relied on a single plea in law claiming, in essence, that the board had erred in concluding that the mark applied for was devoid of any distinctive character within the meaning of Article 7(1)(b). In particular, it was claimed that:

OHIM disputed Jaguar’s claims, claiming that, under Article 7(1)(b), trademarks that are devoid of any distinctive character cannot to be registered.

The General Court first noted that the criteria for assessing the distinctive character of 3D trademarks consisting of the appearance of the product itself are no different from those applicable to other categories of trademarks. In those circumstances, only a mark which departs significantly from the norm or customs of the sector and thereby fulfils its essential function of indicating origin is not devoid of any distinctive character for the purposes of Article 7(1)(b).

The General Court stated that, where a 3D mark consists of the shape of the product in respect of which registration is sought, the mere fact that that shape is a “variant” of a common shape of that type of product is not sufficient to establish that the mark is not devoid of any distinctive character for the purposes of Article 7(1)(b).

The General Court found that the board was fully entitled to hold that account had to be taken exclusively of the representation of the sign as filed, and not of the photographs of the ready-made car or the verbal explanations provided by the applicant concerning that car. In particular, the board had not erred in holding that the references to the model 'Range Rover Evoque' or simply 'Evoque' were irrelevant in the present case, since those terms did not appear in the mark applied for.

The General Court clarified that the board could not be criticised for not taking account of the third-party reviews, which relate either to a ready-made car or to photographs of such a ready-made car, despite the fact that the photographs bring out a number of features, including the car grille and uprights, which are not visible in the six-line drawings the applicant filed for the purpose of registration. Therefore, there had been no contradiction, seeing that OHIM must refer only to the reproduction of the mark applied for attached to the application for registration, and may not take into account characteristics of the mark applied for that are not set out in the application. Consequently, the details of a graphic representation filed for the purposes of registration as a 3D CTM must, on their own, make it possible to determine whether the mark applied for departs significantly from the norm or customs of the sectors concerned, and thus not devoid of any distinctive character for the purposes of Article 7(1)(b).

The court finally remarked that the reference to Article 7(1)(e)(iii) in the board's decision was made “for the sake of completeness” and from the conclusion set out in the board’s decision that was based solely on Article 7(1)(b). Jaguar’s argument in this regard was therefore ineffective.