The Federal Administrative Court has held that there was a likelihood of confusion between the marks GALDAT INSIDE and INTEL INSIDE with regard to certain goods and services (B-3663/2011, April 17 2013).

E-mediat AG sought to register the trademark GALDAT INSIDE for:

Unsurprisingly, Intel opposed based on its registrations for the word mark INTEL INSIDE and the figurative mark INTEL INSIDE (depicted below), both registered for all goods of Class 9, including computer chips and software. 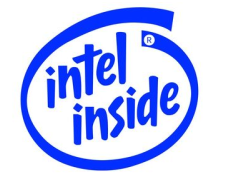 The Federal Administrative Court, on appeal from the Intellectual Property Office (which had partially granted the opposition), held that it was "notorious" that the figurative mark INTEL INSIDE is well known for processors and chip sets. Therefore, INTEL INSIDE enjoyed an enhanced scope of protection with regard to these goods, as well as similar goods and services.

The court found that there was a likelihood of confusion between the marks with regard to data carriers in Class 9 and the development of computer hardware in Class 42, but not with regard to the other goods and services covered by the later mark, notably:

It is likely that neither party is happy with the decision.