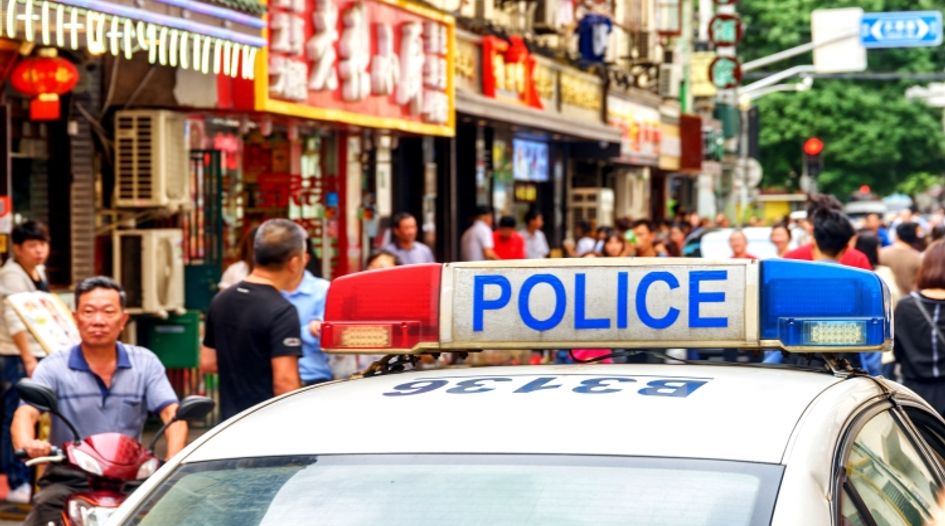 Next week in Boston, Jack Chang, currently special counsel to the chair of L Brands International, will receive the WTR Industry Award for lifetime achievement. Chang is one of the founders of the Quality Brands Protection Committee (QBPC) and in this exclusive guest post, he provides insight into efforts to work with Chinese authorities to drive more efficient and transparent public prosecutions and trials against intellectual property crimes. Crucially, he also offers tips about into how best to work with local authorities and utilise information from police interrogation records in enforcement efforts.

When I worked for one of my previous employers (‘Company X’) as the corporate assistant general counsel based in Shanghai, I wrote to the China State Council to report a serious counterfeit threat, which almost caused Company X’s wound care business to be shut down. I sought the State Council’s assistance in helping fight against the identified ring, which cultivated a large number of counterfeiters throughout China by supplying production machines, know-how and technologies, as well as helping counterfeiters to penetrate Company X’s supply and demand chains. Subsequently, the then-vice premier Wu Bangguo instructed the National Anti-Counterfeiting Office to initiate a special operation across 17 provinces, Shanghai and Chongqing. This operation saved Company X’s wound care business in China and was implemented by the State Technical Supervision Bureau (the predecessor of the General Administration for Quality Supervision, Inspection & Quarantine).

At various local levels, the Technical Supervision Department and police worked as joint forces. As it was a high-profile special operation, when a criminal investigation was concluded and the public prosecution against the counterfeit trademark crime commenced, I was notified by the police and procuratorate and was able to sit in the court trial to witness the process. I learned that even though, as an in-house counsel, I could not apply to the court to copy the court files, when I hired an outside litigator, they could do that. Copying the files, including the police interrogation records, enabled me to better work with outside litigators to prepare for arguments in the court trial on behalf of the company. The more criminal cases that I worked on in this way, the more police interrogation records that I received.

After reviewing a number of these records, I was amazed to find out that, for example, one police unit that was extremely experienced and hard-working asked all the key questions – which not only made the case solid but also uncovered secrets such as from whom the defendant counterfeiter sourced manufacturing machines, raw materials, packaging boxes and cartoons etc, as well as to whom the counterfeit goods were sold. By contrast, I also found that, sometimes, the police units (possibly due to their lack of knowledge about the wound care business or lack of experience in investigating IP crimes) asked questions that were either beating around the bush or were leading in nature, which enabled the defendants’ attorneys to defend them more successfully.

This learning taught me to take an action, and whenever possible I provide a list of questions for the police to use as a check-list for interrogating counterfeiters. Once the case was prosecuted, I then instructed outside litigators to participate in the process and to bring me the court files, including the police interrogation records. This approach has enabled me to find the answers that I needed but could not get from other sources. For example, in a few cases, which involved highly sophisticated counterfeit networks, I was able to find out that some seemingly unrelated counterfeit networks actually interacted with each other to cooperate or even to divide their respective markets. This approach also enabled me to learn how sophisticated counterfeit rings managed to penetrate the supply chain and distribution channels of Company X – which helped me connect all of the dots together.

These experiences convinced me that the traditional administrative enforcement actions served only the function of ‘firefighting’. The effective criminal investigation by the police served as ‘arsonist hunting’. By reviewing quite a few police interrogation records, which contained the answers to the questions that I suggested the police asked, I realised that identifying and fixing loopholes in business processes – from sourcing materials to shipping finished products to consumers and customers – served the function of ‘fire prevention’. Ultimately, effective brand protection must focus on all three – firefighting, arsonist hunting and fire prevention.

Having said the above, when I was with another employer (Company Y) as the corporate senior IP counsel for Asia based in Shanghai, with the full support from the Ministry of Public Security (MPS) and the Economic Crime Investigation Dept (ECID) of Shanghai Public Security Bureau, several counterfeit rings located in different provinces (which were pirating the company’s industrial software) were investigated by the Chinese police, led by the Shanghai ECID. The total value of seized pirated software, when calculated on the basis of the retail price of legitimate copies, was 10 times higher than the amount of Company Y’s annual software sales revenue the previous year in China. This was the highest-profile and biggest scale of piracy/counterfeit case in the company’s history.

Unfortunately, once the cases in various provinces were transferred to the local procuratorates by the police, no further information was available. My repeated requests to visit those procuratorates were rejected by the prosecutors. One of the reasons that local procuratorates gave me for rejecting my visitation requests was that IP-related articles are stipulated in the Chapter of The Crimes of Destructing Socialist Market Order rather than in the ‘property crimes’ chapter of the PRC Criminal Law. Therefore, the public prosecution and trial of IP crimes were for protecting public interests, not for protecting any party’s private property rights. In their view, IP owners are irrelevant to the public prosecution and trial. When I left the company in April 2014, 18 months later, no one knew whether these cases had been prosecuted or tried.

Knowing the importance of IP owners participating in public prosecution and court trials, I therefore approached the Shanghai ECID, advising them what happened to Company Y’s cases in various jurisdictions and arguing that, without a transparent public prosecution and trials process, the value of the ECID’s hard work would not be visible and maximized. After learning of the situation, the Shanghai ECID connected me, in March 2014, with the leadership of the Financial & IP Dept (FIPD) of the Shanghai People’s Procuratorate (SPP). The director of the FIPD fully agreed that IP rights are property rights and advised, that among the 16 districts in Shanghai, seven district procuratorates also had a FIPD. The director advised that the FIPDs of these seven district procuratorates started the practice in 2013 on an ad hoc basis to identify the IP owner(s) involved in IP crimes prosecutions and notify them to participate in the public prosecution and court trial, to exercise their rights and to fulfil the obligations of the ‘victim’ of the crime according to the PRC Criminal Procedure Law.

In several follow up meetings, the director and I kept exchanging thoughts on this subject. Several months later, with the efforts of the director and his director supervisor, the SPP officially issued a written instruction to the seven district procuratorates instructing the district FIPDs to systematically implement the practice and to use the standard form of notice (in both Chinese and English) designed by the SPP when notifying IP owners.

In order to make the job of SPP and the local procuratorates easier, I promised that the QBPC would assist the prosecutors in finding the contacts of the IP owners involved whenever needed, even if they were not QBPC members. A few months later, another district procuratorate set up its FIPD and, as a result, eight district procuratorates in Shanghai adopted the same best practice.

After experimenting with this best practice for three years (2015-2017), in early 2018 I proposed to the director that it was the right time for the SPP to consider implementing it in the other eight district procuratorates (there are 16 districts in Shanghai), even though they did not have FIPDs. The director immediately responded with, “this is doable”. I therefore took the opportunity to go further by saying that many fake and shoddy quality goods crimes also involved counterfeit trademarks. However, since these crimes were prosecuted and tried as ‘quality’ related crimes, and knowing that these quality related crimes were not handled by FIPD but by the traditional Inspection Supervision Dept (ISD) and the Public Prosecution Department of SPP, I discussed the possibility of getting the director’s help in coordinating with these two departments in the hope of achieving the objective that IP owners may also participate in public prosecutions against (and trial of) fake and shoddy quality goods crimes as long as their trademarks were involved in these crimes.

The director immediately invited the director of ISD to join the meeting, and the subsequent discussion was very smooth and positive. Two months after the meeting, SPP sent a written instruction to all the procuratorates in Shanghai, at various levels in all the 16 districts, that – effective immediately – IP owners should be identified and notified whenever an IP crime or fake and shoddy quality goods crime involving trademarks was prosecuted.

After the Shanghai best practice with the Economic Crime Prosecution Dept (ECPD) of Beijing People’s Procuratorate, the ECPD also implemented the same by instructing all procuratorates in Beijing to adopt the same practice.

However, in jurisdictions other than Shanghai and Beijing, many procuratorates are either not familiar with this practice or are reluctant to do so, even though the police work closely with IP owners during criminal investigations. With this knowledge, in January I took an interview about IP protection in China, arranged by a standing committee member of the Chinese People’s Political Consultative Conference (CPPCC). After the interview, I shared the Shanghai best practice with the CPPCC standing committee member, who viewed promotion of the practice as a very positive action to help improve criminal IP protection in China, if it can be adopted in other provinces. The CPPCC Standing Committee member therefore offered help to promote the Shanghai best practice in other provinces.

Furthermore, at a meeting between several QBPC representatives with the senior prosecutors of the Supreme People’s Procuratorate (SPP), I reported the best practice of Shanghai and Beijing procuratorates to senior prosecutors and urged the SPP to help promote the best practice in Jiangsu, Zhejiang, Guangdong and Fujian Province. Their responses were very positive and encouraging.

• Being informed of evaluation opinions (on technical issues) and applying for supplemental or re-evaluation (Art. 146);

• Being heard by the procuratorate when determining whether to indict defendants (Art.170);

• Appealing against a non-indictment decision (Art. 176);

• Making a statement on the indicted crimes and questioning the defendants (Art. 186);

Our current goal is for the adoption of Shanghai best practice in the well-developed provinces such as Jiangsu, Zhejiang, Guangdong and Fujian. If this further step proves to be successful, we will try our best to promote it and establish it as national practice. QBPC has also raised this issue with the top leader of the SPP and the leadership of the National Leading Group Office on the Fight against IPR Infringement & Counterfeiting to seek its help with the promotion.

The efforts made by Chinese police to conduct effective criminal investigation and their collaboration with IP owners can only have a positive impact if the case is finally prosecuted and tried. The participation of IP owners in the public prosecution and court trial not only helps enhance the efficiency of prosecutor’s prosecution but also minimises the room for manipulating the trial due to corruption and/or local protection.