The Korea Customs Service (KCS)’s clearance certification system for parallel-imported goods was implemented as of May 21 2012. Under this system, parallel-imported products will be marked with a “Customs clearance certification mark for parallel imports” - in the form of Quick Response code - during the customs clearance procedure. As a result, consumers will be able to identify, by using their smartphones, the name of the importer, the type of the goods, the brand, the model, the origin, the import declaration date and the name of the Customs office that provided clearance, thereby confirming that the product has been imported through proper channels.

The purpose of the clearance certification system is to promote parallel imports, price stabilisation and, ultimately, reasonable consumption by offering a wide variety of parallel-imported goods to consumers. Through online research, the KCS learnt that the price difference between an exclusively imported product and a parallel-imported product (eg, clothing, shoes, cosmetics and bags) can vary from around 5% to 40%; therefore, the KCS anticipates that the new system will contribute to stabilising prices. Furthermore, by implementing the new system, the KCS hopes to strengthen the protection of IP rights, as it is expected that infringing goods, including smuggled and counterfeit goods, will be easily distinguished from parallel-imported goods and removed from the market.

Below are some relevant statistics with regard to parallel-imported goods.

Parallel imports bearing trademarks recorded with the KCS (in the order of the highest number of parallel importers to the lowest): 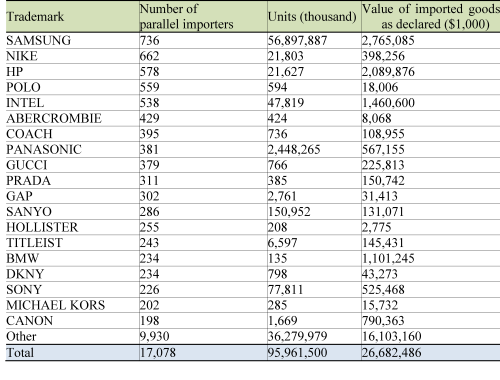