The electric vehicle manufacturer’s market value continues to climb – and so does its brand value. Investors and consumers alike appear fascinated by the company’s quasi- influencer CEO.

July was a stellar month for Tesla. Its market capitalisation officially surpassed that of Toyota, making it the world’s most valuable automaker, while at the start of the month the company grew at an average of $14 billion each day for five trading days straight.

These numbers are impressive but the performance has attracted a number of sceptics, including Bloomberg’s Chris Bryant, who wrote an opinion piece titled ‘Tesla’s Overexcited Fans Should Cool Down a Little’. Particularly striking was Bryant’s description of Tesla’s followers as “fans”. It is true that Tesla has an unusually large group of loyal followers, who have been critical to its success. Even when there are high-profile issues (eg, when the CyberTruck’s ‘shatterproof’ windows broke during an unveiling or the company missed production targets) it has always been able to bounce back. So how did Tesla build such strong brand equity? It largely comes down to top dog Elon Musk and his non-traditional approach to leadership.

Musk is no ordinary CEO. He is an active Twitter user who is known not only for sharing business insights and his own musings, but also for replying to random individuals who get in touch (and at all hours of the day). Unsurprisingly, this no-holds-barred approach to social media has landed Musk in trouble over the years. In 2018 the Securities and Exchange Commission sued him over tweets that he sent claiming that he had secured funding to take Tesla private at $420 a share. As part of the settlement he was forced to pay a significant fine ($20 million), step down as Tesla chair for three years and have a number of future tweets approved by an in-house lawyer. In another instance, the company’s stock dropped a cool 7% after Musk posted an April Fool’s day tweet saying that the business was going bankrupt.

Does Musk’s constant tweeting cause problems? Absolutely. But it is arguably also his, and Tesla’s, greatest strength. The Verge has described Musk as the “first influencer CEO”, pointing out that his high engagement on Twitter and YouTube (while definitely a double-edged sword) differentiates him from other tech leaders in a positive way. Musk makes himself available to consumers and is perceived as being more human, given that he is so open about business successes and failures. Either way, people love it. Musk has 36.6 million followers on Twitter, more than six times that for the official Tesla account. For the sake of comparison, Jeff Bezos has 1.5 million followers and Tim Cook 11.9 million.

What is truly remarkable about Musk’s social media presence is that he has become the single outlet to advertise Tesla. As it stands, the automaker spends nothing on car advertisements. Some see this as a missed opportunity, and one large shareholder has actually raised this as an issue. He proposed that the company spend at least $50 per vehicle produced on advertising, arguing that it would help boost brand value and awareness; however, Tesla’s shareholders voted against this measure. Musk has always been against paying for traditional advertising, insisting that this money should be spent on innovation – and he may have a point, considering how successful he has been so far at drumming up investor and consumer interest in products.

Aside from Musk’s entertaining Twitter feed, another key to Tesla’s success is that people have genuinely bought into the company’s mission to “accelerate the world’s transition to sustainable energy”. The automaker continues to be an industry disruptor, having proven that it is possible to create a car that does not rely on internal combustion engines. The market for electric vehicles is now forecast to increase to 58% of global passenger vehicle sales by 2040, and while other major auto players are increasing their electric car capabilities, Tesla was the first on the scene. It is a powerful position. The company has been relentless in its commitment to building a more sustainable vehicle and the pursuit of this ambitious goal has caught the attention of both investors and consumers.

A testament to Tesla’s success is not just its market capitalisation, but the fact that it is the world’s fastest growing brand. According to Brand Finance’s Global 500 2020 report, the company’s brand value reached $12.4 billion this year, up 65% on last year’s valuation.

Tesla has filed about 740 trademark applications and over 93% of these are still active today, with 692 active records. In its early days the company kept trademark filings to a minimum but there was a surge in volume output in 2013, 2015 and 2017 (see Figure 1). 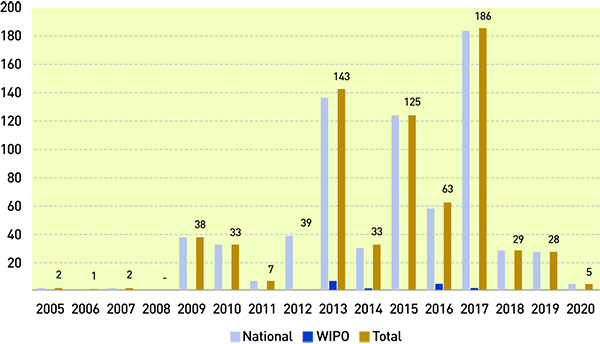 Tesla’s trademarks are protected in 59 registers, with China, the United States and Brazil appearing as the most important jurisdictions (see Figure 2). In 2013 the company started making use of WIPO’s Madrid Protocol, filing 18 trademark applications via this route since then. 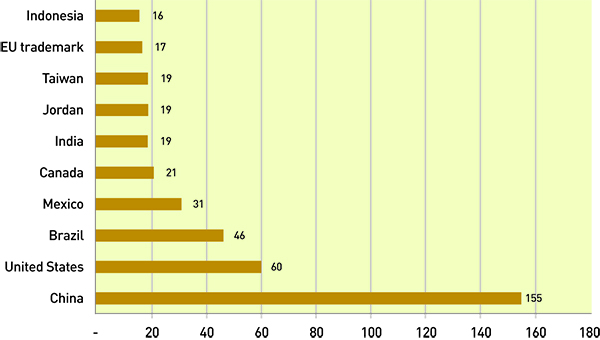 Source: CompuMark; Note: Applications filed via the Madrid Protocol are counted as one register 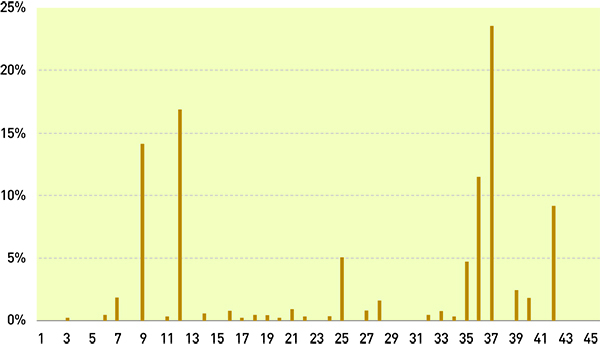 A few years ago, in an apparent April Fool’s joke, an application was made to register TESLAQUILA in Class 33. According to Reading the application at the USPTO was abandoned – although it is still alive at the Mexican Institute of Industrial Property. Further, a new application was filed with the USPTO in February for TESLA covering “distilled agave liquor” (notably tequila is made from the blue agave plant). The potential for Tesla-themed alcohol does not end there, with the Tesla ‘T’ logo registered in Mexico under Class 33 covering alcoholic beverages, excluding beer.

Musk is a charismatic leader and, since becoming the face of Tesla, has helped boost the company’s brand and market value. Like many high-profile characters he is divisive, although it is hard to argue with the fact that he puts himself out there on a personal level, which makes him relatable to consumers. Combine this with the fact that he is committed to an ambitious goal of environmental sustainability and you can see why he and Tesla are so popular.

However, despite having honed this branding strategy, Musk himself appears to be unfussed with the whole process. In 2018 a follower tweeted: “Elon – what about the companies’ (one startup in mind) already developing Electric trucks? Isn’t the Tesla brand a bit premium for a truly rugged truck?” Musk replied: “I hate whole idea of brands and branding. So much bs. I hope it messes with our brand. Brands suck.”

Given how much Tesla’s CEO has benefitted from having a strong brand with good equity this is a slightly puzzling statement. But even if he does believe this, he does not appear to be actively trying to do anything other than promote the company and its products.

Many of those in senior leadership positions could learn a thing or two from Musk’s open approach to the public. While it may not be a good idea to imitate him completely, there is nothing wrong with showing a bit more personality to help champion your brand. Yet as with any strategy, the approach is not without risk. In Musk’s case, he has become so synonymous with Tesla that a question hangs over what would happen to the company’s brand should Musk ever step down.