Budějovický Budvar, národní podnik v Office for Harmonisation in the Internal Market (OHIM) (Joined Cases T-225/06 RENV, T-255/06 RENV, T-257/06 RENV and T-309/06 RENV, January 22 2013) relates to a trademark dispute between Anheuser-Busch and Budějovický Budvar that has been raging since 1996. No doubt both parties have undertaken economic analysis of the damage caused to their business by their competitor and that these time-consuming and costly proceedings can therefore be justified commercially. However, the casual observer might reasonably conclude that lawyers and the emotion of this dispute now overwhelm any prospect for a reasonable, commercial resolution.

In 1996 the US brewery Anheuser-Busch, best know for its US-style lager Budweiser, first sought to register the word mark BUD as a Community trademark (CTM). A further three applications followed, including for the label design shown below. These applications were opposed by the Czech brewer Budějovický based on its earlier registration for BUD (stylised). 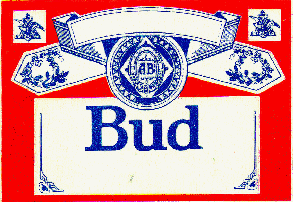 The General Court, with the guidance of the Court of Justice of the European Union (ECJ), has now concluded that Anheuser-Busch's BUD trademarks can be registered, and has dismissed Budějovický's oppositions.

Budějovický relied not only on usual 'likelihood of confusion' arguments (under Article 8(1)(b) of the Community Trademark Regulation (40/94), now the Community Trademark Regulation (207/2009)), but also on BUD as a protected appellation of origin under the Lisbon Agreement in France, Italy and Portugal, and in Austria under another treaty, relying on Article 8(4) of the regulation. Article 8(4) of the regulation requires that the "non-registered trademark" (in this case, BUD) must be "used in the course of trade" and "of more than mere local significance".

Budějovický appealed all four decisions to the General Court in 2006. In 2008 the General Court upheld Budějovický's appeal finding that the Board of Appeal had erred in finding the BUD was not an appellation of origin and also in its application of the test for "of mere local significance".

Anheuser-Busch appealed to the ECJ. In its decision of March 29 2011, the ECJ decided, among other things, that in considering "use in the course of trade of a sign of more than mere local significance", an assessment must be made of the probative value of the evidence produced to OHIM by the applicant. The approach the ECJ laid down is a holistic one and the courts must look at the evidence in order to assess the strength of the earlier unregistered right relied on.

However the ECJ agreed with some of the General Court's conclusions, such as Budějovický's valid appellation of origin registrations under the Lisbon Treaty and the lack of necessity for the 'genuine use' concept to be applied in assessing the 'use in the course of trade' test.

The case returned to the General Court who then applied the ECJ's guidance on "use in the course of trade of more than mere local significance".

Applying the guidance of the ECJ, the General Court concluded that the evidence filed by Budějovický showed deliveries only to three French towns and in limited volumes and that there was therefore not use of "more than local significance" in France.

Likewise for Austria, the General Court found that the evidence filed by Budějovický showed that sales were low in terms of both volume and turnover. Press cuttings relating to the products covered only a few months in 1997 and the coverage in terms of geography and the relevant public could not be determined. The General Court again concluded that there was not use of "more than local significance" in Austria.

Since the conclusion of this case, Anheuser-Busch has made a statement that the ruling was “majorly important”, as it will “fill in the gaps” in the few European countries where it lacks trademark protection for Bud and Budweiser. Anheuser-Busch's statement said: “We are extremely pleased that the continued expansion of our trademark rights supports our global expansion plans for Budweiser”.

What are the lessons to be learnt from this titanic battle? The facts of this case are unusual but, to many, the interest in this case results merely from the long and bitter struggle between Anheuser-Busch and Budějovický.

However, from these decisions it is possible to discern some useful guidance regarding the evidence needed to demonstrate use of more than local significance. In the United Kingdom, where unregistered trademark rights are protected by the common law tort of passing, trademark practitioners are used to filing extensive evidence demonstrating use of the unregistered mark. It appears that a similar approach should be adopted by those seeking to demonstrate 'non-registered' trademark rights in continental EU member states.