In Adelholzener Alpenquellen GmbH v Office for Harmonisation in the Internal Market (OHIM) (Case T-347/10), the General Court has upheld a OHIM decision finding that a Community trademark (CTM) application for a three-dimensional (3D) bottle displaying jagged lines that constituted a mountain range lacked distinctive character, as it did not diverge significantly from other drinks bottle shapes.

Adelholzener Alpenquellen GmbH filed a CTM application for a 3D bottle displaying jagged lines that constituted a mountain range in respect of “beers, mineral and aerated waters and other non-alcoholic drinks, fruit drinks and fruit juices, syrups and other preparations for making beverages” in Class 32 of the Nice Classification. 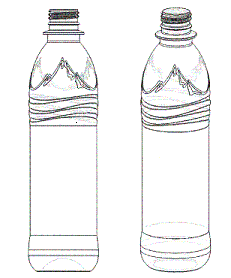 OHIM refused the application on the ground the mark was devoid of distinctive character within the meaning of Article 7(1)(b) of the Community Trademark Regulation (207/2009). The Board of Appeal of OHIM upheld the decision, finding that the basic geometric shape was commonly used for this type of drinks bottle, and that the figurative mountain range was merely a decorative element that lacked trademark significance. Adelholzener appealed.

The General Court noted that the criteria for assessing the distinctive character of a 3D mark were no different than those applied to other categories of marks. In applying such criteria, however, it needed to be considered that the relevant consumers would not necessarily perceive the shape of a product in the same way as a word or figurative mark. Where graphic or word elements were missing, consumers would not normally identify the origin of goods on the basis of their shape or their packaging, so it could be more difficult to establish distinctiveness in relation to a 3D mark than it would be for a word or figurative mark.

As a liquid product could only be marketed for sale in packaging, the average consumer would normally only attribute a functional purpose to the packaging. A 3D mark consisting of packaging would therefore only be considered to be distinctive if it allowed the informed and reasonably observant and circumspect consumer to immediately differentiate the goods of one undertaking from those of another without carrying out any further analysis. Only 3D marks departing significantly from the norm would, therefore, be capable of fulfilling the essential function of indicating origin.

The General Court agreed with the Board of Appeal’s finding that the trademark applied for was a composite 3D mark in the form of a beverage container having three components: a basic form, a corrugated surface and a ribbed bottle neck.

The General Court found that the general shape of the bottle was standard in the drinks bottles market. With respect to the surface of the bottle, the General Court agreed with the Board of Appeal that many beverage manufacturers used images, lines and ribbed surfaces on their bottles, evidencing that this was common in the trade.

With respect to the mountain range figurative element, which Adelholzener claimed to be its logo, the General Court found that the consumer would not perceive this as an independent sign, but merely as a decorative element. In any event, the General Court found that the mountain range, just like the grooves around the bottle, were not a significant departure from the norm within the field of drinks bottles.

Noting that there was nothing particularly original or striking about the various elements of the bottle, the General Court found that the Board of Appeal had not erred in refusing the application, as the mark was incapable of distinguishing the goods to which the application related from those of other undertakings.

The General Court further held that the absence of examples of bottles representing the norms of the sector in the examiner’s refusal decision was not material, since it was common knowledge that many bottle manufacturers used ribbed surfaces.

This case reconfirms that it is an uphill struggle to obtain a registration for a product container that does not have a unique or novel shape. Even where surface elements on such packaging are unusual, this may not be sufficient to obtain trademark protection as it may be dismissed as surface decoration without any trademark significance.