General Court: shape of games box not registrable as CTM

In Rosian Express SRL v Office for Harmonisation in the Internal Market (OHIM) (Case T-547/13, October 8 2015), the General Court has upheld a decision of the Fifth Board of Appeal of OHIM finding that the three-dimensional mark (3D) depicted below was devoid of distinctive character for goods and services in Classes 28 and 35 of the Nice Classification. 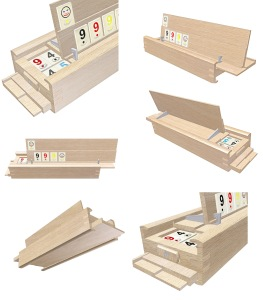 In its decision, the General Court reiterated the now established standards for the registration of 3D marks consisting of the shape of the packaging, namely:

In its appeal, the applicant asserted that the Board of Appeal had not taken in account the following aspects:

The General Court examined and rejected these arguments.

With respect to the relevant public, the court considered that the goods at issue fall within the category of games and toys and, as such, are intended for general consumption, anyone being likely, at some time or another, to acquire such goods either regularly or occasionally. Therefore, the Board of Appeal was right to find that the relevant public consisted of average, reasonably well-informed and reasonably observant consumers. The court further stated that the Board of Appeal was not required to provide evidence showing what was the relevant public and its level of attention, as OHIM cannot be required to carry out an economic analysis of the market or consumer survey to determine the consumers' level of attention.

The court further explained that OHIM is fully entitled to take well-known facts into consideration in its assessment. Thus, in the present case, the Board of Appeal could lawfully find that the mark applied for had no distinctive character by “relying on well-known facts arising from the practical experience generally acquired from the marketing of general consumer goods without having to provide specific examples”.

It follows that it is common knowledge that the goods at issue are often presented in a rectangular wooden box. The court further considered that “the way of unfolding and assembling the box the shape of which constitutes the mark in question, namely by a system of sliding racks allowing the game to be put away or to be assembled, does not depart significantly from the norms or customs of the sector”.

Finally, the court also rejected the applicant’s argument that the board's decision was discriminatory in relation to the registration of prior 3D marks and, therefore, did not comply with the principles of proportionality, equity and justice. The court considered that the application of these principles must be reconciled with the principle of legality. Therefore, an applicant cannot plead in his favour any unlawful act committed in favour of another in order to obtain an identical decision.

This decision is another reminder that the registration of 3D signs as Community trademarks remains very challenging.