In El Hogar Perfecto del Siglo XXI SL v Office for Harmonisation in the Internal Market (OHIM) (Case T-337/12, November 21 2013), the General Court has affirmed a decision of the Third Board of Appeal of OHIM upholding the cancellation of a registered Community design (RCD) for “corkscrews” based on an earlier Spanish design registration for “bottle openers” under Articles 4, 6(1)(b), 6(2) and 25(1)(b) of the Council Regulation on Community Designs (6/2002). 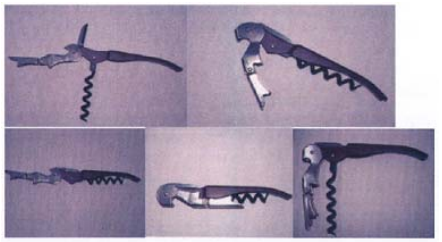 In 2009 Wenf International Advisers Ltd - the intervener in the proceedings before the General Court - applied for a declaration of invalidity of the RCD on the basis of the earlier Spanish design registration depicted below: 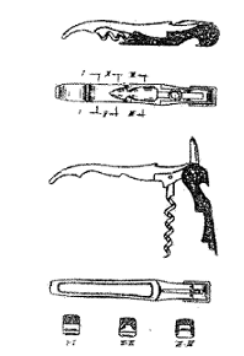 The Cancellation Division of OHIM upheld the application for a declaration of invalidity on the ground that the contested design lacked individual character - that is, it did not produce a different overall impression on the informed user. The Cancellation Division stated that the overall impression produced by the contested design was no different to that produced by the earlier design, in the light of the many similarities between them, such as:

Such similarities were to be assessed in the same way, whether the devices were open or closed. Lastly, the Cancellation Division found that the designer of the contested RCD had enjoyed a high degree of freedom, since a corkscrew could have been designed in many different ways.

The Third Board of Appeal of OHIM affirmed the Cancellation Division's decision and dismissed the appeal. The board first held that the informed user of the design was both a private individual and a professional who uses the products covered by that design - that is, both an average consumer and a professional sommelier. Second, the board confirmed that designers of corkscrew enjoyed a high degree of freedom. Even though corkscrews have certain functional parts, they may be designed and put together in a number of ways. The board found that the two designs at issue had non-functional elements in common, in particular the design of the handle and the positioning of the small blade and, as a result, the designs did not produce a different overall impression on the informed user.

On further appeal to the General Court, applicant El Hogar argued that the Board of Appeal had incorrectly defined 'the informed user' as being both an average consumer and a professional sommelier; rather, the applicant claimed that the corkscrew at issue was used only by professionals, who would be able to see and appreciate the differences between the products, as such lever-action corkscrews are not sold in retail to consumers.

The court rejected this argumentation, finding that the applicant had failed to substantiate its claims that the informed user was exclusively a "person who works with wine and/or in the supply thereof" and that a private individual would rarely use a double-lever corkscrew of the kind at issue. Accordingly, the court held that the Board of Appeal had not erred in finding that the informed user of the design in question was both a private individual and a professional who uses the products covered by that design.

With regard to the degree of freedom of the designer, the applicant argued that four features were required because of the technical function a corkscrew of that type - that is, the helical screw, the two levers, the handle and the small blade. Of these four features, only the handle and the small blade can be designed differently. Moreover, as far as the blade was concerned, the applicant claimed that to position it anywhere else on the handle of this type of corkscrew would ultimately make it ineffective, unsuitable for its purpose and dangerous. The designer’s degree of freedom in relation to a double-lever corkscrew was thus limited.

The court first examined evidence from the file of designs for lever-action corkscrews with varying shapes and configurations that differed from those used in the contested design. For example, differences could be noted with regard to the dimensions and shape of the handle, which may be straight or curved, rounded or oblong, and with regard to the visible part of the other features of a corkscrew which may be included in the handle. There were also differences with regard to the presence and position of a bottle-opener or a small blade. The court also held that the applicant had not produced any evidence that altering the position of the small blade on the handle would make it unsuitable for its purpose and even dangerous. Accordingly, the court found that the design and shape of the handle and the position of the abovementioned features were not dictated by requirements of functionality. Therefore, the general appearance of the corkscrew was not determined by the existence of technical constraints and could vary considerably, and the Board of Appeal had correctly found that the designer’s degree of freedom with regard to a corkscrew was high.

The court then went on to consider the overall impression given by the two designs. In this respect, the applicant first argued that the board had erred in examining only the corkscrews in a closed position (and not in an open or ready-to-use position) and, second, that there were significant differences.

With regard to the applicant’s first claim, the court held, in effect, that the board had only examined the closed corkscrews in order to ascertain whether there were significant differences in the designs of the handles of the designs at issue, which leave the same parts of the screw and lever visible when they are folded. However, it was clear from the board's decision that the Cancellation Division had found that the many similarities between the two designs at issue could be assessed in the same way irrespective of whether the devices were open or closed. That conclusion was not disputed by the applicant before the Board of Appeal.

According to case law, when the Board of Appeal confirms a lower-level decision of OHIM in its entirety, the decision of the Cancellation Division, together with its statement of reasons, forms part of the context in which the contested decision was adopted, a context which is known to the applicant and which enables the court to exercise in full its jurisdiction to review legality as regards the question of whether the assessment of the individual character of the design at issue was well founded. The court held that, because lever-action corkscrews are designed specifically to fold up, the Board of Appeal had not erred in taking account of the impression produced by the designs at issue on the informed user when the corkscrews were closed - all the more so because, within the sector concerned, the products at issue are mainly, and sometimes exclusively, represented in the closed position which is, as a general rule, the basic position of lever-action corkscrews. Finally, it is when a corkscrew is in the closed position that it is possible to discern the overall shape of the design representing it.

The court then analysed the differences claimed by the applicant, including the differences between the handle, blade, helical screw and levers, but concluded that the designs produced the same overall impression.

This case is interesting in that it affirms that there were earlier design rights in a relatively common object, namely a corkscrew. Although the owner of the contested RCD lost, the legacy of this decision will be a strengthening of RCD rights in Europe, due to the court expanding on the concepts of 'informed user' and 'same overall impression'.

Another interesting aspect is that the court examined not only the two-dimensional designs at issue, but also - at the request of the applicant - the physical embodiments of the designs (ie, the actual corkscrews). In this case, the court held in favour of the holder of the earlier rights, despite the production of the physical products corresponding to both designs. This shows that, although one might claim that it is inappropriate to consider anything but the registered designs (which best define the scope of protection of the earlier design), here the earlier rights prevailed, even though the court examined both products simultaneously.