General Court: English principle of extended passing off is compatible with CTM regime

In Tilda Riceland Private Ltd v Office for Harmonisation in the Internal Market (OHIM) (Case T-136/14), the General Court has, for the second time concerning this matter, annulled a decision of a Board of Appeal of OHIM. In doing so, it has once again confirmed that the English principle of extended passing off is compatible with the European trademark regime.

In November 2003 Siam Grains submitted an application to OHIM to register a Community trademark (CTM) for a figurative mark incorporating the word 'basmali'. 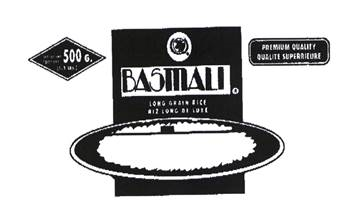 This mark was specified for long-grain rice in Class 30 of the Nice Classification.

United Riceland Private Ltd (now Tilda Riceland Private Ltd) subsequently filed a notice of opposition based on the English claim for 'extended passing off'. This common law tort principle allows for actions for passing off where the goodwill in a mark, distinctive of a particular class of goods, is shared between a group of traders.  Under English law, such an action may be initiated by any member of the said group. The opponent claimed ownership in the non-registered rights to BASMATI due to long use in the course of its international trade in rice with specific origin. The opposition relied on Article 8(4) of the Community Trademark Regulation (40/94), now the Community Trademark Regulation (207/2009), which allows for oppositions based on a “non-registered trademark or… another sign used in the course of trade of more than mere local significance”.

In January 2008 the Opposition Division of OHIM rejected the opposition, finding, in particular, that the opponent had failed to submit evidence showing how the rice exported to the United Kingdom was marketed. Consequently, the opponent had failed to prove that it had acquired the goodwill necessary to succeed in a passing-off action in the United Kingdom.

Tilda Riceland responded by filing an - ultimately unsuccessfully - appeal against this decision. In its March 2009 ruling the First Board of Appeal of OHIM found that there were no proprietary rights in BASMATI. It ruled that the word BASMATI was generic and a common designation of a variety of rice. The board concluded that the opponent had failed to show that it had ownership of the term 'basmati' and that, accordingly, the opposition had not shown the existence of a proprietary right as required under the regulation. Tilda Riceland appealed.

In January 2012 the General Court annulled the First Board of Appeal’s decision, holding that the latter had failed to determine whether Tilda Riceland had acquired rights over BASMATI in accordance with local law. The case was therefore reallocated to the Fourth Board of Appeal of OHIM which, in December 2013, dismissed Tilda Riceland's appeal on the grounds that the opponent had not provided evidence that the name 'basmati' had been used as a distinctive mark in the course of its trade. The board found that establishing this was particularly troublesome for the opponent as BASMATI-labelled rice was marketed by numerous other UK traders and, as such, always appeared in combination with various other traders’ trademarks. The board also noted in its ruling that the opponent was a foreign manufacturer who had at no time made use of the BASMATI mark within the UK market itself.

Tilda Riceland again appealed the decision to the General Court, submitting that, in the United Kingdom, BASMATI would be entitled to the same degree of protection as CHAMPAGNE or SWISS CHOCOLATE by means of an action for extended passing off.

The General Court, in annulling the board’s 2013 decision, found that:

“a sign used to designate goods or services may have acquired a reputation on the market for the purposes of the law applicable to passing off, even though it is used by several traders in the course of business … That ‘extended’ form of passing off, recognised by the United Kingdom courts, accordingly enables several traders to have rights over a sign which has acquired a reputation on the market.”

The opponent was therefore not required to show that the word 'basmati' is used to distinguish its goods from that of other traders.

In further reviewing the board’s reasoning, the General Court concluded that Article 8(4) of the regulation had been misinterpreted. Article 8(4), the General Court ruled, does not necessarily require that the function of the mark be to identify the commercial origin of the goods concerned, but may also convey such characteristics as “geographical origin”, inherent “special qualities” or “the characteristics on which… reputation is based”. Further, it was not relevant that the opponent had itself not marketed the good in the United Kingdom. The General Court therefore concluded that the BASMATI mark is distinctive for the purposes of Article 8(4) as it serves to identify certain goods in relation to other similar goods and services.

This decision is significant in that it paves the way for opposition and invalidity actions relating to CTMs to be brought by one or more members of a group of traders who share goodwill in a particular non-registered mark.