In Sachi Premium-Outdoor Furniture Lda v Office for Harmonisation in the Internal Market (OHIM) (Case T-357/12), the General Court has upheld a decision of the Third Board of Appeal of OHIM in which the latter had reversed a decision of the Cancellation Division finding that a registered Community design (RCD) was valid.

In 2009 Sachi Premium-Outdoor Furniture Ldaregistered the following design as a RCD for "armchairs, loungers": 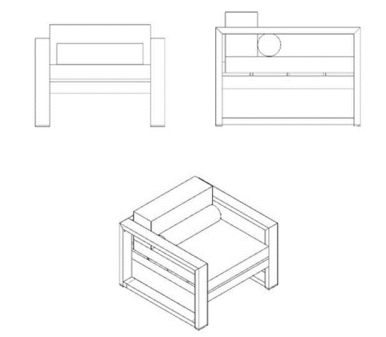 In 2010 the intervener, Gandia Blasco SA, applied to OHIM for a declaration that Sachi’s RCD was invalid, based on Articles 4 to 9 of the Council Regulation on Community Designs (6/2002). The intervener relied on its own RCD, registered in 2003 for "armchairs":

The Invalidity Division rejected the application for a declaration of invalidity on the ground that the contested design was new and had individual character within the meaning of Article 25(1)(b) of the regulation, read in conjunction with Articles 5 and 6.

The intervener appealed and was successful. The Third Board of Appeal of OHIM took the view that the contested design created the same overall impression on informed users as the earlier design, since all the essential characteristics of the latter were reproduced in the former; moreover, to differentiate the contested design, besides very slight, barely perceptible variations, only one other component had been added - namely, three cushions. Such a component could generally be associated with armchairs in the course of ordinary use of the products.

On appeal, as regards the designer’s degree of freedom in relation to armchairs, the General Court found that it was “almost unlimited”. Sachi argued that the designer’s degree of freedom is limited by "[the] style/fashion/trend/mode in which it is integrated" and that these factors had to be taken into account in the assessment of the individual character of a design. However, the court rejected this argument, holding that this was not relevant to the examination of the individual character of the design concerned - the issue was whether the overall impression produced by it differed from the overall impressions produced by the designs made available earlier, irrespective of aesthetic or commercial considerations.

As regards the overall impression, it was common ground that, in addition to the cushions, there were minor differences in the designs (eg, in the number of seat plates (three and four) and the connection of the seat to the backrest). The crux of Sachi’s claims and arguments was that the board had ignored the importance of the three cushions which, according to Sachi, significantly affected the overall impression of the contested design, in particular because the backrest cushion extended above the frame of the armchair and thus did not give the impression of a "perfect cube”, contrary to the earlier design. However, the court held that the board had taken the cushions into consideration, and had not erred in finding that the designs gave the same overall impression. Accordingly, the court affirmed the Board of Appeal’s decision.

This case sets a strong precedence for the vitality of the RCD. It shows that designers cannot create new designs simply by adding components, such as cushions, to earlier designs if the fundamental designs give the same overall impression. This decision should encourage the registration of fundamental designs, as such registration can be used to block later designs which merely embellish the earlier designs with non-essential ornamentation or removable components.