In Kastenholz v Office for Harmonisation in the Internal Market (OHIM) (Case T-68/11), the General Court has considered whether OHIM had misinterpreted the concepts of novelty and individual character when assessing the validity of a registered Community design (RCD), depicted below, to be used in connection with "watch dials, parts of watch dials and hands of dials". 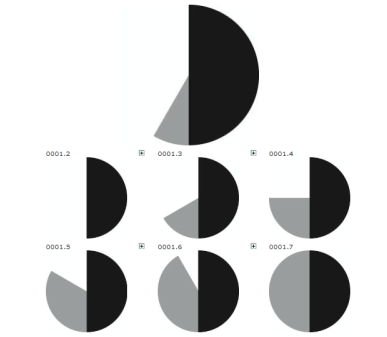 Erich Kastenholz lodged an application for a declaration of invalidity of the design, arguing that it lacked novelty and individual character under Article 25(1)(b) of the Council Regulation on Community Designs (6/2002), citing the earlier rights of German artist Paul Heimbach under Article 25(1)(f). The works of art in question - including  'Farbfolge II, 12 Stunden im 5-Minuten Takt' ('Sequence of colours II, 12 hours in a cadence of 5 minutes'), shown below - consisted of the depiction of a dial that changed with the movement of the hands, and in which each hand was fixed to a coloured, semi-transparent disc that generated different colours each time the hands were superposed. 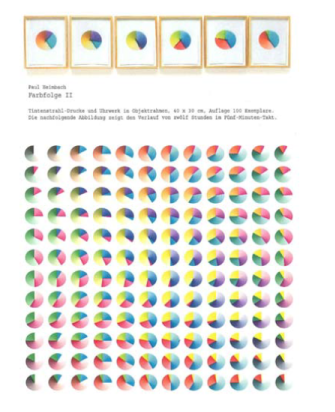 The Cancellation Division of OHIM dismissed the application for a declaration of invalidity, and that decision was upheld by the Board of Appeal. The board essentially found that the challenged RCD was new and possessed individual character to the extent that it was not identical to the earlier design, and produced a different impression on the informed user. In addition, it ruled that the RCD did not constitute a reproduction or an adaptation of the earlier work cited by the applicant.

The General Court upheld the conclusions of the Board of Appeal with regard to novelty and individual character and the extent to which these concepts overlap.

In the court’s view, the board had correctly concluded that the designs at issue were not identical. Although both used the specific position of coloured discs to show the time, the visual results that they produced varied substantially, as the different number of discs involved and the different colours or shades of the discs had the effect of creating clearly dissimilar combinations. The court further rejected the argument that the board had assessed incorrectly the novelty of the challenged design (registered in black and white) because it had not found that colour was irrelevant for such analysis. In the court's opinion, the board's reasoning was based on "the ability of the designs at issue to produce a more or less wide spectrum of colours and a permanent change in tones, and not on the difference in colour between them".

With regard to the existence of individual character, the court agreed with the board that the dissimilarities between the designs were sufficient to produce a different overall impression on the informed user. Taking into consideration the "importance of the appearance" of the products at issue, which are meant to be worn visibly on the wrist, any differences between such products would not be deemed insignificant by the informed user.

Lastly, the court rejected the claim of copyright infringement under Article 25(1)(f) of the regulation. The applicant was reminded that it is not possible to protect ideas, such as that of indicating time by means of the colours of the discs that compose a watch dial, and that it had not been shown that German copyright law provided otherwise (ie, that it prohibits the reproduction of the idea underlying an earlier work of art).

The action was thus dismissed in its entirety.