In the long-running dispute between Chocoladefabriken Lindt & Sprüngli AG and Riegelein, the Frankfurt Appeal Court has held, for the third time, that there was no likelihood of confusion between Lindt’s Golden Bunny and Riegelein’s Easter bunny (Case 6 U 10/03).

Lindt challenged the sale of chocolate Easter bunnies by competitor Riegelein, claiming infringement of its three-dimensional Community trademark, which consists of the shape of a sitting bunny wrapped in gold foil, with ornamental drawings, a pleated red collar with a ribbon and golden bell, and a logo including the word element ‘Lindt Goldhase’ (‘Golden Bunny’): 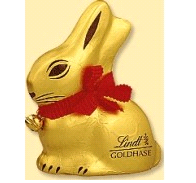 Riegelein’s Easter bunny consisted of a sitting bunny wrapped in gold/bronze foil, with ornamental drawings, a painted brown ribbon and a logo including the word elements ‘Riegelein Confiserie’: 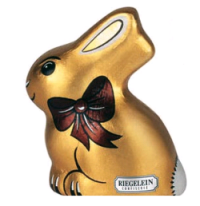 The court concluded that the shape and colour of the Golden Bunny would be perceived by consumers as an indication of origin – that is, “as a trademark”. However, these features had only a low degree of distinctiveness. Although market surveys submitted by Lindt demonstrated that the clear majority of interviewees associated the shape of the Golden Bunny with Lindt, the court found that these results did not demonstrate that the mark had a high degree of distinctiveness.

According to the court, the results of the surveys were explained by Lindt’s dominant market position, rather than because the shape constituted an indication of origin. With regard to the pleated red collar with a ribbon, small bell and ornamental painting, the court held that these features did not function as an indication of origin, but were merely decorative elements. By contrast, the word element displayed on the Golden Bunny enjoyed a high degree of distinctiveness.

The court further found that the shape and colour of the allegedly infringing bunny were highly similar to the shape and colour of Lindt’s mark, and that they served as an indication of origin. However, the other distinctive elements of the parties’ products - namely, the word elements - were clearly dissimilar. Hence, there was no likelihood of confusion. The court thus rejected Lindt’s claims of trademark infringement, as well as its claims of unfair competition and misleading advertising.

This decision was to be expected, but is still disappointing. It appears that the court has again failed to adequately consider the criteria outlined by the Federal Supreme Court and the specific circumstances of the case.

First of all, the court failed to correctly assess the relevance of the shape of the conflicting signs. Second, it did not take into account that other chocolate bunnies are very different from Lindt’s Golden Bunny. The overwhelming results of the market surveys indicated that the shape and colour of the Golden Bunny are highly distinctive. Third, the court failed to assess the overall similarity of the parties’ products. In fact, the court came to the same conclusion as in 2006: the differences between the word elements were sufficient to avoid confusion.

It will be interesting to see whether Lindt appeals to the Federal Supreme Court for a third time.