‘What you see is what you get’ is one of the vital principles of EU (and German) design law. Particularly in relation to designs for component parts of a complex product (ie, parts used in or incorporated into a complex product, eg, a car hood), EU design law ties availability of design protection to visibility of such parts during normal use. This ‘visibility criterion’ has massive practical relevance in design law. Still, the Court of Justice of the European Union (CJEU) – despite a few incidental remarks in the more recent Ferrari ruling (C-123/20) on unregistered EU designs – has not yet had the chance to give specific guidance on how ‘visibility’ is to be assessed. Upon a referral (I ZB 31/20) from the German Federal Supreme Court (BGH), an inconspicuous bicycle saddle might now write history in that it could trigger the CJEU to define the contours of the visibility criterion in more detail.

The case hinges on protection for the underside of a bicycle saddle.

Upon a third-party invalidation action before the German Patent and Trademark Office, the design was declared invalid by the German Federal Patent Court based on the argument that it was not visible. However, in EU law, elements of a complex product are principally not subject to design protection, if they are not visible during normal use for the end user. The parallel German legal provisions, on the other hand, tie design protection to the visibility during “use as intended”. This semantic deviation has now triggered the BGH, upon appeal from the design owner, to ask the CJEU for more detailed guidance in interpreting these terms.

As the visibility criterion intends to prevent the abuse of design rights for internal components, in particular of motor vehicles (eg, the clutch), the BGH considers a wider definition of visibility and thereby a narrow exemption from protection to be suitable. This interpretation would ultimately also be in line with Article 26(2) of the Agreement on Trade-Related Aspects of Intellectual Property Rights, which allows only limited exceptions to design protection. The question is now whether only the intended use determined by the manufacturer (ie, riding the bicycle) is relevant, or the broader concept of normal use by the end user (including transport and hanging up the bicycle). Unlike German design law, other translations of the relevant EU legislation, especially the English, Italian and Dutch language versions, refer to the concept of ‘normal use’, which might support the second interpretation.

In this context, the BGH referred the following questions to the CJEU.

First, is a component part (ie, embodying the design) of a complex product already visible if it is objectively possible to see such in the installed state in the complex product. Or does the assessment of visibility have to consider the specific conditions of use or a specific perspective of the user?

If the answer is the second option, does ‘intended use’ of a complex product by the end user refer to:

Finally, which criteria are to be considered when assessing, whether use of a complex product by the end user is intended use?

A decision of the CJEU is expected in Summer 2022.

While, at first glance, this case might give the impression of merely being from the curiosity cabinet of design law, a more detailed look at the implications of the visibility criterion on infringement cases reveals the possible impact of the upcoming CJEU decision. This is because the principle of reciprocity presupposes that only features that take part in design protection could – vice versa – take part in the scope of protection of the design, and be infringed at all. Thus, if a characteristic feature of a design is not visible during normal/intended use, an overlap in such a feature – on the other hand – must not be taken as a basis for an infringement claim.

In this context, the following examples illustrate that the definition of the visibility criterion may play a role in many situations and industries.

A design is claimed for an automatic wrist watch design (top and bottom view) featuring a uniquely shaped (not purely technical/functional) rotor (the weight that keeps the movement mechanism working through motion) as part of the movement visible through the transparent case bottom of the watch or the design is claimed for just the uniquely shaped rotor (see below). The rotor (being a component part of a complex product) is not visible when the watch is worn, however, it may be visible when the watch is displayed or stored in the automatic watch winder (as a collectible or to keep the watch running when not being worn). The contested third-party product features an identical or highly similar rotor. 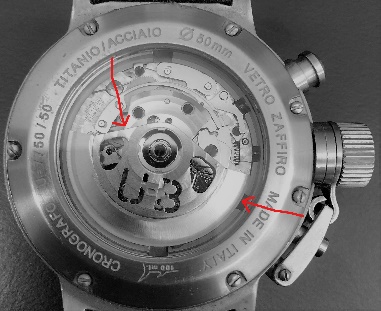 Is the design owner allowed to rely on overlaps, respectively the third party on differences, in the rotor design in an infringement case?

A design is claimed for a unique built-in ceiling loudspeaker and the design registration displays the speaker only, without the cover plate. The contested third-party product comprises a loudspeaker with identical interior design, which is mandatorily installed with a cover plate hiding the ‘infringing’ interior design.

Is the design owner allowed to rely on overlaps in the interior design, which cannot be seen in the possibly infringing product when properly installed?