On October 17 2013 the First Senate of the German Federal Supreme Court (Bundesgerichtshof) decided in the TEST case (Docket No I ZB 65/12), lifting the previous decision of the Federal Patent Court and questioning whether TEST had acquired secondary meaning for magazines and related publishing services. The reasons for the decision have been made available only recently.

Stiftung Warentest is a consumer protection association which was originally founded and subsidised by the German state. Stiftung Warentest conducts objective tests for products and services and, in particular, compares various products of a similar kind, using objective criteria to evaluate their quality. The test results have been published in a magazine under the title test since about 1966. Since 1968, the magazine has been a market leader for tests and consumer information. Over the past years, Stiftung Warentest has sold about 5.7 million copies of the magazine per year, and it has had more than 37 million visits on its website since 2011. The test results in the magazine have such a high reputation that consumers consult a test magazine before they buy a TV set, dishwasher or camera. For the same reason, the test results are often used by manufacturers in commercial advertising. These results have been subject to various legal disputes, as a “good” or "bad" result in test magazine can have an impact on the turnover of the products.

In April 2003 Stiftung Warentest filed a German trademark application for the word 'test' in a special script style on a red background: 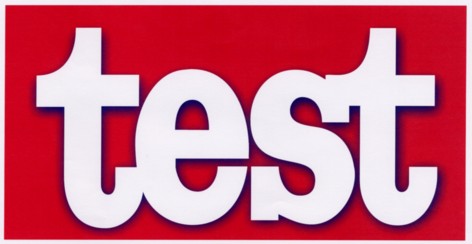 The mark was registered in January 2004 for goods and services in Classes 16, 35, 41 and 42 of the Nice Classification after Stiftung Warentest allegedly showed that it had acquired distinctiveness.

After a party initiated cancellation proceedings against the mark, Stiftung Warentest limited the scope of protection of its German registration for TEST (and device) to:

Importantly, Stiftung Warentest changed the get-up of its magazine by reducing the size of the word 'test', (which was still on a red background) and also mentioning 'Stiftung Warentest' and adding a stylised letter 'T' at the centre of the new logo: 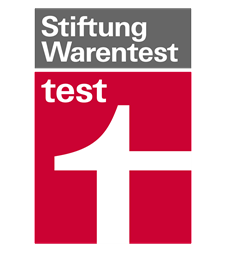 The applicant in the cancellation proceedings argued that the mark should not have been registered for the remaining goods and services and that it had not acquired any distinctive character in the course of trade. The Cancellation Division of the German Patent and Trademark Office, following this line of argumentation, ordered the cancellation of German mark No 303 20 703. Upon appeal, the Federal Patent Court lifted the decision, holding that the mark was distinctive for some of the services and that the trademark owner had proved that its mark had acquired distinctiveness for the other goods and services.

Apart from the services of “information about legal and tax questions”, for which the Federal Supreme Court agreed with the Federal Patent Court that TEST is not descriptive, the decisive question was whether the TEST mark, in this specific form, could be registered for test magazines and consumer information, as well as for the publishing of magazines and consumer information and of product tests and service tests.

The Federal Patent Court had relied on:

It had also referred to the unique position of Stiftung Warentest as a state-founded and subsidised organisation for consumer protection and its high reputation. The Federal Patent Court had also taken into account a 2010 survey submitted by Stiftung Warentest, showing a degree of awareness of 43% among German consumers.

The Federal Supreme Court disagreed with these holdings, and clearly stated that a degree of awareness of 43% in 2010 did not allow the conclusion that the mark had a sufficient degree of awareness in 2012 when the decision in the cancellation action was first issued by the Patent and Trademark Office. Similarly to the Court of Justice of the European Union (ECJ), the Federal Supreme Court was not prepared to state a fixed percentage for acquired distinctiveness and repeated that all circumstances should be taken into account. However, it confirmed that the minimum percentage of 50%, which could be higher in cases involving merely descriptive terms, should not be reduced, except in specific circumstances.

In the case at hand, the awareness of test magazine among the public was 43% at best and, according to the Federal Supreme Court, this was not sufficient to justify the assumption that the mark had acquired distinctiveness. The Federal Supreme Court also reviewed the other factors and stated that the advertising expenditures, which covered a broad period from 1987 to 2005, did not allow any conclusions to be drawn for 2012. The court indicated that the amended use of the word 'test' in the new logo could also have an impact on the awareness of the mark, as the word 'test' now plays a minor role in the overall impression. The Federal Supreme Court disagreed with the Federal Patent Court that TEST would be perceived as a secondary mark in the new logo and asked the Federal Patent Court to review this finding.

The case was thus referred back to the Federal Patent Court. However, with the clear guidelines of the Federal Supreme Court, it is most likely that the registration of TEST will finally be cancelled for almost all goods and services, as:

This decision is significant for owners of marks registered on the basis of acquired distinctiveness. Even though the Federal Supreme Court again refused to state any fixed percentages for a finding of acquired distinctiveness, other questions have now been clarified. The Federal Supreme Court found that it was not necessary to ask the ECJ for a preliminary ruling, even though related questions are pending before the ECJ, as the Federal Patent Court referred the Sparkassen-Rot case to the ECJ last year.