The claimants filed an action for revocation of the German figurative trademark DUFF BEER (No 39901100) on the grounds of alleged non-use. The defendant asserted use of its trademark “in a form differing in elements which do not alter the distinctive character of the mark in the form in which it was registered” (Section 26(3)(1) of the German Trademark Act). Since ‘Duff Beer’ is well known as a fictitious beer brand appearing in the US cartoon series The Simpsons, the Federal Supreme Court had to identify whether the relevant circles in this case were:

German trademark No 39901100 has been registered in the name of the defendant since June 8 1999 in Class 32 of the Nice Classification for, among other things, “beer”:

The label below was used on beer bottles sold by the defendant from 2004 to 2009: 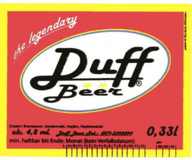 Did such use amount to genuine use of the registered mark? The owners of the two following trademarks (both registered for “beer” on April 28 2009 and August 21 2009) did not think so and brought an action for revocation of the defendant’s mark on the grounds of non-use. 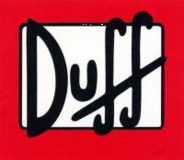 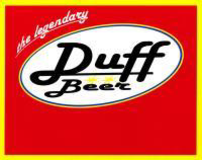 Section 26(3)(1) of the Trademark Act, which corresponds to Article 10(1)(a) of the Trademarks Directive (2008/95/EC), provides that genuine use of a trademark includes “use of the trademark in a form differing in elements which do not alter the distinctive character of the mark in the form in which it was registered”.

The Nuremberg Appeal Court found that the requirements of this provision had been met, given that the distinctive part of the defendant’s registered mark - the word element ‘Duff Beer’ - was the dominant element of the trademark and label. Differences in font, style and colours were considered to be marginal.

The Federal Supreme Court affirmed. According to established case law, the distinctiveness of a word-and-device mark usually originates from the verbal element. The figurative element, however, can be of importance if the verbal element is relatively descriptive. In the case at hand, the court found that ‘Duff’ did not have any descriptive connotation within the relevant national circles of beer drinkers.

The claimants argued that ‘Duff Beer’ was well-known as the favourite drink of Homer Simpson, a protagonist in the cartoon series The Simpsons. Accordingly, the audience of The Simpsons would pay attention not only to the name ‘Duff’, but also to the graphic design of the bottle label and, therefore, would perceive the differences between the label as used and the defendant’s mark as being significant. Such differences would preclude the mark as used from being considered as an acceptable variant under Section 26(3)(1) of the Trademark Act.

The court, however, found that the relevant circles for a trademark registered and used for beer were beer drinkers - that is, “a broad public made up of adult consumers”, and not only fans of The Simpsons, even though the trademark holder obviously tried to attract fans of The Simpsons by way of “reverse product placement”. According to the court, a reasonably well-informed and reasonably observant and circumspect (beer) consumer would pay attention mainly to the word element ‘Duff Beer’, and not to the rather ornamental graphic design. Consequently, the court held that use of the bottle label shown above amounted to genuine use of the defendant’s mark.