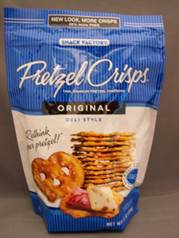 When is the Supplemental Register descriptive term ‘pretzel chips’ generic? This question was faced by the Court of Appeals for the Federal Circuit (CAFC) in the recent case of Princeton Vanguard LLC v Frito-Lay North America Inc (Case 2014-1517).

Princeton Vanguard LLC appealed from the February 2014 decision of the Trademark Trial and Appeal Board (TTAB) cancelling Princeton’s 2005 Supplemental Registration of the term ‘pretzel chips’ ('pretzel' disclaimed) for pretzel crackers. The TTAB also affirmed the opposition against Princeton’s 2010 Principal Register application for PRETZEL CRISPS ('pretzel' disclaimed) for pretzel crackers despite a claim of acquired distinctiveness under Section 2(f) based on first use in 2004. The TTAB concluded that the mark was generic.

The validity of a registered US mark may be challenged as 'generic' at any time. Despite the owner’s good-faith efforts, once the relevant purchasing public comes to think that a registered mark is the name of a class of things or the thing itself (a noun) and the registered mark does not currently identify or indicate the source of those things (an adjective), the mark is generic. The relevant public's current perception is the primary consideration in determining whether a term is or is not generic. Generic terms can never be exclusively appropriated by one party as a brand. Third parties are entitled to use generic terms with legal impunity to honestly describe the qualities of their goods or services.

The TTAB outlined the two-part test used to determine whether a mark is generic, namely:

The Federal Circuit agreed that this is the proper test to be applied. It further noted that, in circumstances where the TTAB finds it useful to consider the public's understanding of the individual words in a compound term as a first step in its analysis, the TTAB must then consider available record evidence of the public's understanding of whether joining those individual words into one lends additional meaning to the mark as a whole.

Princeton argues that the TTAB applied the incorrect legal standard - namely it assessed the PRETZEL CRISPS mark as a compound term instead of a phrase. Specifically, Princeton contends that the TTAB:

"took the short-cut of analysing whether the words 'pretzel' and 'crisps' are each generic for a pretzel and a cracker, and then it merely assumed the public would understand the combined mark PRETZEL CRISPS to be generic for 'pretzel crackers' without due consideration of the actual evidence of record".

Frito-Lay argued on appeal that the applicable legal standard depends on an initial factual determination of whether the purported mark is a compound term or a phrase.

The Federal Circuit disagreed with Frito-Lay’s arguments that the applicable legal standard depends on an initial factual determination of whether the purported mark is a compound term or a phrase. It concluded that, "regardless of whether the mark is a compound term or a phrase, the applicable test is the same and the [TTAB] must consider the record evidence of the public's understanding of the mark as a whole". By focusing solely on the mark's constituent parts, the TTAB deviated from this court's precedent, which requires consideration of the mark in its entirety. Here, it failed to adequately consider the record evidence which purportedly shows that the purchasing public understands the term ‘pretzel chips’ to be a brand name. Since the TTAB applied the incorrect legal standard when it failed to consider the relevant public's understanding of the PRETZEL CRISPS mark in its entirety, the case was reversed and remanded for application of the proper standard.

It will be interesting to see how the TTAB determines this hotly litigated case on remand.