When does issue preclusion prevent a successful party in civil litigation resulting in a final judgment from pursuing a cancellation and/or opposition against the losing party in that civil litigation before the Trademark Trial and Appeal Board (TTAB)? This issue was answered by the US Court of Appeals for the Federal Circuit in its June 18 2013 opinion in Levi Strauss & Co v Abercrombie & Fitch Trading Co (2012-1495, 1496, June 17 2013).

Levi Strauss is a famous jean-maker and owner of multiple federal registrations for the famous 'arcuate' stitched connecting arches brand applied to the rear pockets of its jeans: 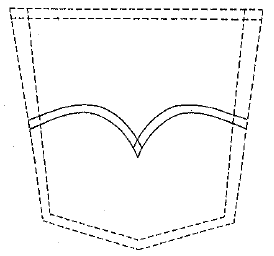 This mark has been used continuously by Levi on jeans since 1873. 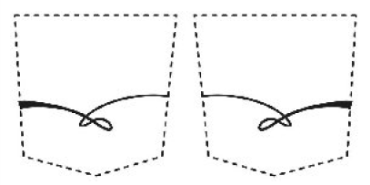 Upon learning this, Levi filed an opposition against the published application and a cancellation petition against the supplemental registration at the TTAB based on likelihood of confusion and trademark dilution. When A&F began using its 'Ruehl mirror image stitching design' trademark in commerce in Ruehl stores, Levi filed suit in US district court, alleging likelihood of confusion and trademark dilution by blurring. The TTAB actions were suspended pending the outcome of the civil litigation.

At trial the issue was whether the Ruehl brand infringed or diluted Levi’s famous mark. A&F argued persuasively that there could not be likelihood of confusion or trademark dilution between its Ruehl brand and Levi’s brand because all Ruehl products were sold exclusively in its stores, where Levi’s branded jeans were not sold. Additionally, A&F’s branded apparel was very expensive when compared to the cost of Levi’s jeans sold in department stores.

On this issue a unanimous jury verdict of non-infringement was reached. The jury also rendered an advisory verdict of no dilution by A&F’s Ruehl brand jeans of Levi’s famous 'arcuate' stitch mark. The district court entered findings and judgments accordingly. Levi did not appeal the non-infringement judgment, but appealed the dilution judgment to the Circuit Court of Appeals. While the appeal was pending, A&F closed all Ruehl stores and discontinued use of the Ruehl mark and clothing line.

In 2011, the Circuit Court reversed and remanded the dilution judgment because the trial court ruled that dilution by blurring required identity or near identity of the marks at issue, which was an erroneous standard.  Thereafter, and in light of the end of the Ruehl line of branded clothing, Levi voluntarily dismissed its dilution claim and the district court entered judgment in 2011 against Levi with prejudice.

As all civil litigation between the parties finally ended the suspended opposition and cancellation proceedings at the USPTO resumed. A&F filed motions for summary judgment, arguing that claim preclusion and issue preclusion barred Levi’s challenges in the proceedings. The TTAB ruled that claim preclusion did not apply because of the “significant differences” between the “transactional facts required to establish infringement in a district court, and cancellation of a registration at the board”. It granted summary judgment on the ground of issue preclusion in both proceedings, holding that there was no genuine dispute of material fact that the elements of issue preclusion exist and operate to bar Levi’s likelihood of confusion and dilution by blurring claims in the opposition and cancellation proceedings. Levi filed this appeal from the TTAB’s ruling.

On appeal, the US Court of Appeals for the Federal Circuit reversed and remanded, holding that the TTAB had erred in ruling that issue preclusion barred Levi’s challenges in related opposition and cancellation proceedings. It explained that, in order for issue preclusion to bar litigation of an issue raised in a second suit, there must be an earlier determination of that issue in a first suit and the earlier determination must have been necessary to the resulting judgment in that suit.

Claim preclusion does not depend on an earlier court’s resolution of a particular issue, but prevents a litigant, in certain circumstances, from pressing issues in a second suit that it could and should have raised in earlier litigation even if it did not. Claim preclusion prevents litigation of “all grounds for, or defences to, recovery that were previously available to the parties, regardless of whether they were asserted or determined in the prior proceeding”. The court summarised the overall preconditions for claim preclusion:

Under those standards, the Federal Circuit held that the district court litigation between Levi and A&F did not support either issue or claim preclusion to bar Levi from pressing its opposition and cancellation proceedings before the TTAB.

The dilution judgment of 2009 was reversed on appeal to the Circuit Court. Applying bedrock principals of preclusion law, the Federal Circuit found that a reversed judgment cannot support preclusion and therefore Levi may proceed on it dilution claim at the TTAB. Further, that 2009 judgment was not an extant final judgment on the merits as required for claim preclusion. The 2009 district court findings are not necessary to a resulting judgment, as required for issue preclusion, when the only judgment they support has been reversed.

The Federal Circuit noted that the district court only considered whether the one product on which Abercrombie was applying the mark infringed Levi's marks. However, an opposition proceeding requires analysis of not only existing products but also a determination of whether any products for which the registration is sought may result in confusion. The USPTO and district court proceedings do not involve the same transactional facts, pragmatically judged. The scope of a USPTO action is much broader in most cases compared to civil litigation.  A district court's finding of non-infringement in litigation may not necessarily bar a later USPTO action on the grounds of either claim preclusion or issue preclusion.