The EU General Court has ruled today that two parallel stripes on footwear infringes the 'three stripes' trademark rights of adidas. Reflecting the recognition acquired by the footwear giant’s branding, the decision also shows the power of non-traditional marks according to one IP attorney; however, another has questioned whether it is an example of a brand enjoying “hyperprotection”.

The decision is the latest development in a long-running saga between adidas and Belgian footwear company Shoe Branding Europe, which began when the latter filed two trademark applications at the European Union Intellectual Property Office (EUIPO) in 2009 and 2011. The marks – consisting of footwear with two parallel stripes positioned at an angle (one of which is pictured) – were opposed by adidas, which argued they were too similar to its own ‘three stripe’ trademark, and that the opposed marks relied on its own registered rights. 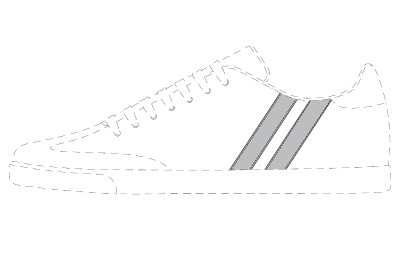 Though this opposition was rejected by the EUIPO’s Opposition Division and then by the Second Board of Appeal in late 2013, the EU General Court annulled the appeal board's decision two years later, finding that there is a likelihood of confusion between the two marks. In February 2016, the ECJ dismissed an appeal against the General Court’s decision, before the Second Board of Appeal once more ruled against Shoe Branding the following June.

However, Shoe Branding has refused to back down from the bitter battle, and brought an action against the refusal. In its view, the EUIPO – during its second comparison of the two trademarks – had just reiterated the earlier decision of the ECJ and not carried out its “own analysis”. Today, the EU General Court dismissed these claims in two separate decisions (here and here), therefore allowing adidas to oppose the marks.

This latest decision is described as “unsurprising” by Jacqueline Pang, a trade mark attorney at Mewburn Ellis, who adds: “The Boards of Appeal had simply adopted the General Court’s analysis in an earlier judgement between the same parties and taken it to its logical conclusion. That General Court decision had also subsequently been confirmed by the Court of Justice of the EU, the EU’s highest court. Ultimately it was the significant reputation of adidas’s three stripes on footwear that won the day.”

Pang says Shoe Branding “shot itself in the foot” with a 2007 promotional campaign in Spain and Portugal wherein it used the slogan ‘two stripes are enough’ (thereby inviting a comparison with adidas), adding that it “was felt to be a ‘concrete element’ in finding that it had taken unfair advantage of adidas’s mark and also in proving that Shoe Branding’s use of its mark was not always in good faith”.

But not all experts were as pleased with the ruling; IP lawyer Jordi Güell of Curell Suñol wondered on Twitter whether the decision reflected a form of “hyperprotection” of the adidas brand, while Aurea Suñol‏, a law professor at Pompeu Fabra in Barcelona, added: “Under [EU] General Court’s view, it seems that adidas has a monopoly not only over three parallel stripes but also under two of them, even if they are located in a different position on the competitor´s shoes.”

Indeed, Pang agreed that it demonstrates the power of a well-enforced non-traditional mark: “The decision proves that although it may be initially difficult to obtain protection for non-traditional marks, they can be well worth the effort as potentially effective and powerful weapons against third parties.”

For now then, adidas is in the driving seat in this particular legal dispute (although there remains an ongoing appeal against the cancellation of one of adidas’ marks by Shoe Branding in the EU). In Pang’s words, adidas "may have won the battle but the war continues”.