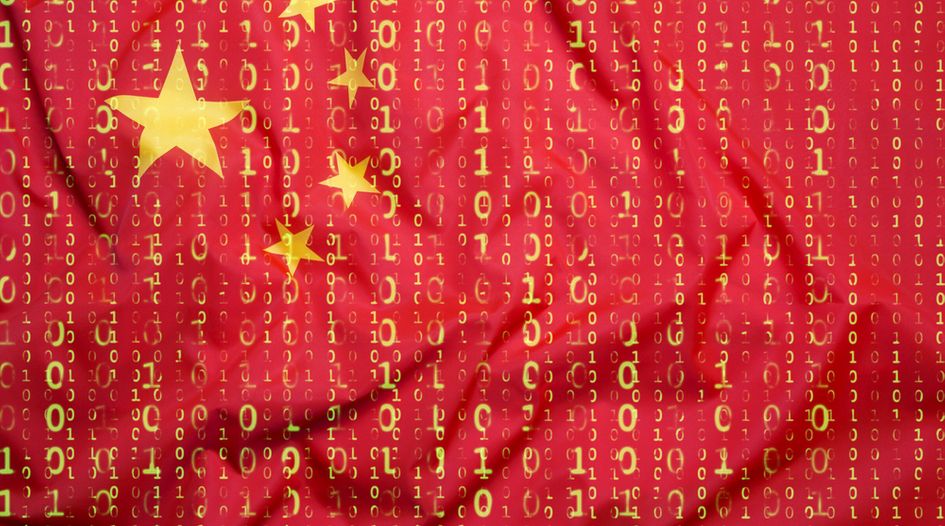 When it comes to litigation forum shopping in China, experts at AnJie Law Firm argue that foreign companies should pay closer attention to courts in central cities, as the probability of winning is actually higher for foreign parties than domestic parties in most regions.

When it comes to choosing a venue for litigating trademark disputes in China, it is generally believed that a foreign company’s chance of winning may be harmed by local protectionism, especially in courts in central and mid-sized cities. However, analysis of 11,056 judgments made by Chinese courts in 2019 reveals that this might be a false impression.

Generally speaking, the data suggests that the probability of winning is higher for foreign parties than domestic parties, except in Chengdu and Pudong. This further suggests that, in terms of trademark rights, local protectionism is unlikely to be an issue in many Chinese jurisdictions – even where the courts are located in central areas.

The probability of a plaintiff winning in a trademark infringement case in China is an incredible 93.17%. Compared to other civil plaintiffs, trademark owners are much more likely to be awarded a favourable result. In fact, the likelihood of winning increases to almost 100% in several courts.

The figure below represents the percentage of trademark plaintiffs that won in various courts in 2019. At the higher end, the courts in the Zhejiang and Jiangsu provinces (eg, the Changshu People’s Court, the Cixi People’s Court and the Nanjing Intermediate People’s Court) showed a strong preference for protecting trademark owners by ruling in favour of the plaintiff 100% of the time. Coincidently, these courts are also ranked as the most efficient courts, spending the least amount of time making decisions. 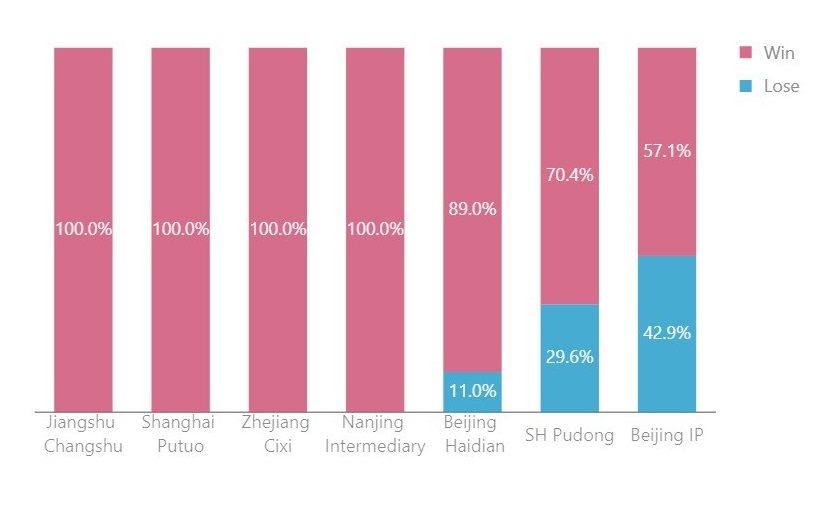 On the other hand, the Beijing IP Court awarded favourable outcomes in only 57.1% of cases. The Shanghai Pudong People’s Court ruled in favour of the plaintiff in 70.4% of its cases and the Beijing Haidian People’s Court in 89% of its cases. This does not necessarily mean that the Beijing and Shanghai courts do not value IP rights; instead, the reason that a larger number of cases are not decided in favour of the plaintiff in these courts may be because parties prefer Beijing or Shanghai forums for difficult or controversial disputes.

Despite the general belief that a foreign company’s chance of winning may be harmed by local protectionism, especially in courts in central and mid-sized cities, the figure below shows that some central courts adopt a friendly and favourable attitude towards foreign parties. For example, the Changsha Intermediate People’s Court ruled in favour of trademark owners in all the 2019 infringement judgments involving foreign parties, while the Changshu court (which may not be as experienced as the Changsha court) also ruled in favour of foreign trademark owners 100% of the time. Thus, foreign companies should pay closer attention to courts in central cities as they are prone to ruling in favour of foreign parties. 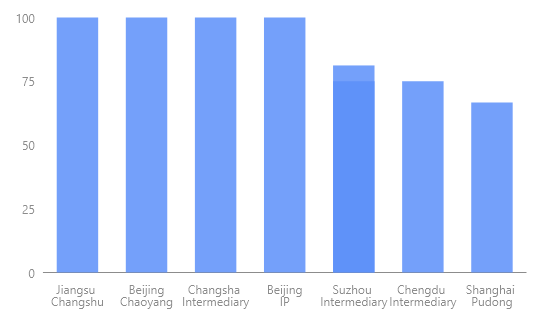 Conversely, courts located in big cities are not generally believed to have an issue with local protectionism and instead are expected to provide equal protection to foreign parties. Beijing courts such as the Beijing IP Court have always valued the protection of foreign parties’ legitimate trademark rights; although the Pudong People’s Court in Shanghai has the lowest wining rate for foreign parties, there were only six litigation cases in the study involving foreign parties before this court; therefore, this statistic is not indicative of a trend of preference or prejudice. 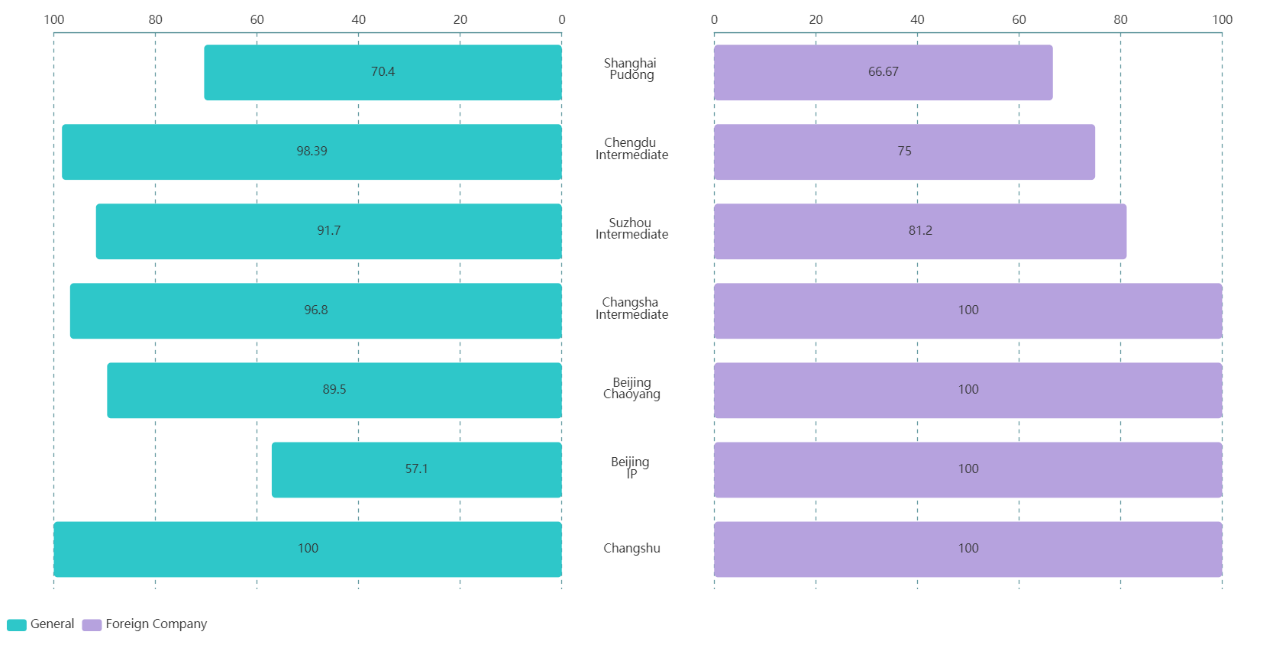 The data suggests that given the high probability of winning in all courts, a foreign plaintiff will almost always receive the relief that it is seeking – whether it is monetary damages or an equitable injunctive.

If the amount of compensation is the most important factor, the Beijing IP Court and the Shanghai Pudong Court, are regarded as better choices, since they are experienced in dealing with disputes involving large damages and are more willing to award greater compensation to protect foreign parties’ legitimate interests. However, it may take longer for these courts to issue a judgment, so a party should carefully consider whether it is necessary to file there.

Of course, the ongoing global crisis will also play a part when it comes to deciding where to litigate. While most Chinese courts can continue their work online through the covid-19 pandemic, delays may occur for other reasons. For instance, notarisation for certain types of evidence or documents cannot be completed because most notary offices have been closed during the pandemic. Particularly for foreign parties, legalisation services by the local government as well as by the Chinese embassies or consulates in their home countries have been unavailable since these authorities were shut down. Without the required document authentication, cases cannot be docketed by Chinese courts. Therefore, international IP owners need to take these force majeure situations into consideration when planning a lawsuit in China during the ongoing crisis.

This is an extract from a longer article on Chinese forum shopping, which will be published in the next issue of WTR – available to subscribers in early July.