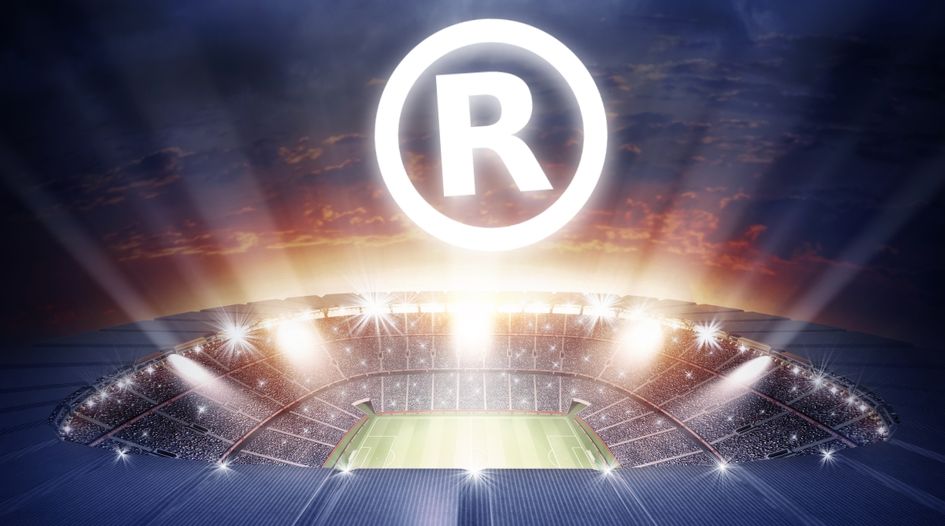 The announcement of a European Super League (ESL), a new competition featuring 12 leading football clubs, has been met with outcry from industry commentators and fans alike. Analysis from WTR finds that the clubs set to be involved in the ESL are leading holders of brand value and trademark registrations – even if, in some cases, they have had little trophy success in recent years.

The formation of the European Super League was announced last night, with 12 football clubs joining as founding members: AC Milan, Arsenal, Atlético de Madrid, Chelsea, Barcelona, Inter Milan, Juventus, Liverpool, Manchester City, Manchester United, Real Madrid and Tottenham Hotspur. The new competition will be governed by the founding clubs, with three further clubs “anticipated” to be added ahead of the inaugural season (predicted to begin in August). In a statement, vice-chairman of the ESL (and co-chairman of Manchester United) Joel Glazer claims the ESL “brings together the world’s greatest clubs and players”.

While other media outlets are extensively covering the backlash and legal threats caused by the bombshell announcement, the brand and trademark aspects are notable.

Firstly, while big money deals appear to already have been struck (especially in terms of television rights), the ESL has some potential brand protection issues. For example, the domain ‘europeansuperleague.com’ has not been purchased by the league, and could be acquired by anyone (as it available for bidding by a third-party owner). Instead, it has opted to use the domain 'thesuperleague.com'. Furthermore, WTR found an EU and a UK registered trademark for the term EUROPEAN SUPER LEAGUE which was registered in 2019 by German resident Norbert Graf. Those trademarks cover clothing, training and publishing. There is no evidence that Graf is associated with the ESL or the football industry – and, if these trademarks are registered by a third-party, could lead to a legal challenge.

On top of that, two more trademarks for EUROPEAN FOOTBALL LEAGUE have been filed, but not yet registered, in Spain. These are owned by Javier Pérez-Lobo Mancha and Miguel Ángel Galán Castellanos and were filed in October 2020 and January 2021 respectively. It is unclear, however, if either of these recently filed Spanish trademarks were filed by a representative of the ESL. While Mancha appears to be a EuropCar employee (according to LinkedIn), Galán is associated with the football industry – a recent article suggests he is president of the National Center for the Training of Soccer Coaches (CENAFE).

However, at least one trademark has been lodged that appears to be owned by the new competition. An application was filed last week at the EUIPO for the logo of THE SUPER LEAGUE by the law firm Clifford Chance. At the time of publication, the owner of the trademark has not been revealed, but the logo is the same as the one found on the official ESL website. The trademark covers hundreds of goods and services, including merchandise, broadcasting, and sports activities. As it was filed so recently, it is not expected to reach registration for a number of months (assuming it is not challenged).

While the ESL itself may not hold any registered trademark rights right now, it is notable how the 12 founding clubs hold the biggest trademark portfolios in world football. As Table 1 (below) reveals (from our annual look at football-related IP), the six UK Premier League clubs that will join the ESL own over 1,500 trademarks between them, while the six other European clubs (three from Italy, three from Spain) hold a further 1,250 (Table 2 below). When compared to all other football clubs, few can compete – only five others (Paris Saint-Germain, Bayern Munich, Borussia Dortmund, Newcastle, and West Ham) own more than 50 trademarks. This is despite, in some cases, a lack of recent success. For example, Tottenham has not won a major trophy since 1991 (but won the League Cup in 2008 and were UEFA Champion League runner’s up in 2019), while Arsenal last won the Premier League in 2004.

Similarly, as Table 3 below reveals, the most brand-aware football players are also – for the most part – playing for what would be ESL clubs. Leading the way is Barcelona superstar Lionel Messi, who owns over 160 trademarks around the world.

Of course, trademark portfolios underpin brands and what the breakaway league, if launched, would boast is a stellar array of the latter. Brand Finance has yet to issue its 2021 football club brand value list but, considering the 2020 list, eight of the ten most valuable football brands (Real Madrid, Barcelona, Manchester United, Liverpool, Manchester City, Chelsea, Tottenham Hotspur and Arsenal) feature - with just Bayern Munich and Paris Saint-Germain missing. Juventus (11th on the Brand Finance list), Atlético de Madrid (13), Inter Milan (14) and AC Milan (22) are no paupers in this regard.

Another question, then, is how the Super League will impact value and reputation over the longer term.

The first thing to note is that there is clearly money behind the league. The launch statement from the ESL notes: “Founding Clubs will receive an amount of €3.5 billion solely to support their infrastructure investment plans and to offset the impact of the COVID pandemic.” A rumoured $6 billion debt financing package is coming from JP Morgan, which has today confirmed it is involved in the breakaway league (there were reports last year suggesting it was in talks with a number of clubs about such a move).

Therefore, should the league launch and be successful in negotiating lucrative global TV rights, the ESL will provide a financial boost to these elite clubs. Such a financial injection will also allow them to further invest in, and solidify, their brands.

Outside of the finances, the teams also have perception and reputation in mind. In yesterday’s statement, the ESL spoke about solidarity payments to European football, stating that, “as soon as practicable after the start of the men’s competition , a corresponding women’s league will also be launched, helping to advance and develop the women’s game”. The statement is clearly intended to position the league as a force for good in the industry.

Asked about the possible impact of the league, if it went ahead, on value, Ben Baigrie, senior consultant at Brand Finance, told WTR: “The impact on brand value would depend on each participating club’s ability to generate additional revenue and following from the league. For example, if the League is a huge success and clubs can earn significantly more revenue and attract additional fans, brand value will increase as a result. In the longer term, if this new league attracts the desired following from fans around the world, and generates significant broadcasting and sponsorship deals as a result, then it would most certainly grow the brand value of participating clubs. In 2020, the 12 clubs mentioned as being part of this Super League proposal represented 56% of the total brand value in the top 50 clubs globally in the Brand Finance Football 50 ranking. With clubs of such calibre involved, the chances of success will certainly be higher, but the overall results will depend largely on how domestic leagues and governing bodies react.”

However, on the flipside, goodwill is central to brands and the backlash – from FIFA, UEFA, the leagues, media commentators, and fans – has been visceral. And should legal battles ensue that delay the league’s planned August start, the outcry could be dragged out for some time, potentially further damaging the brands of the teams involved. Further, should the plans be scuppered, there could be a negative  reputational hit for those involved.

However, Baigrie reflects: “The backlash from fans would have to be severe for it to have any impact on the football clubs’ brand values. The only way there will be serious repercussions will be if the other leagues step in with punitive action. Fans themselves have little power individually so would need to vote with their feet and stop purchase of merchandise or matchday spend. But even with these efforts, the Premier League teams get the majority of their revenue from either broadcasting rights or international sales. If the leagues, for example, could force relegation or other sanctions with significant financial impacts it would be a strong disincentive and would move the dial on club valuations.”

When the news broke of the league, some commentators saw it as a negotiating ploy on the part of the clubs involved, at a time when the UEFA Champions League format was being looked at. However, with financial backing in place, it appears to be much more than that, especially given the impact of the covid-19 pandemic.

In July last year, the 2020 Brand Finance Football Annual calculated that covid-19 had caused the total brand value of the top 50 clubs to decrease for the first time in 6 years, with 3.7% of value knocked off. For some, the impact was bigger – for instance, Real Madrid (whose club president Florentino Perez is chair of the breakaway league) saw its brand value decline by 14% to €1.42 billion.

Speaking at the time, Richard Haigh, managing director of Brand Finance, stated: “Top-level football has been confronted with the largest existential threat since the Second World War. Loss of income, coupled with health concerns about mass gatherings, have raised question marks about the future of the industry and the financial resilience of clubs across all levels. The full damage of the covid-19 crisis has yet to unfold.” Eight months on and covid continues to have an impact on club finances, which will have given the plans for a lucrative breakaway renewed momentum.

The picture is a fast moving one (even during the writing of this piece news broke of JP Morgan’s involvement and that a number of the clubs involved in the proposed breakaway had quit the European Club Association, which represents over 200 clubs across the continent). However, while criticism in the media has focused on the move being a financial play, less mentioned is the asset the league (and these finances) will be founded on: brand. 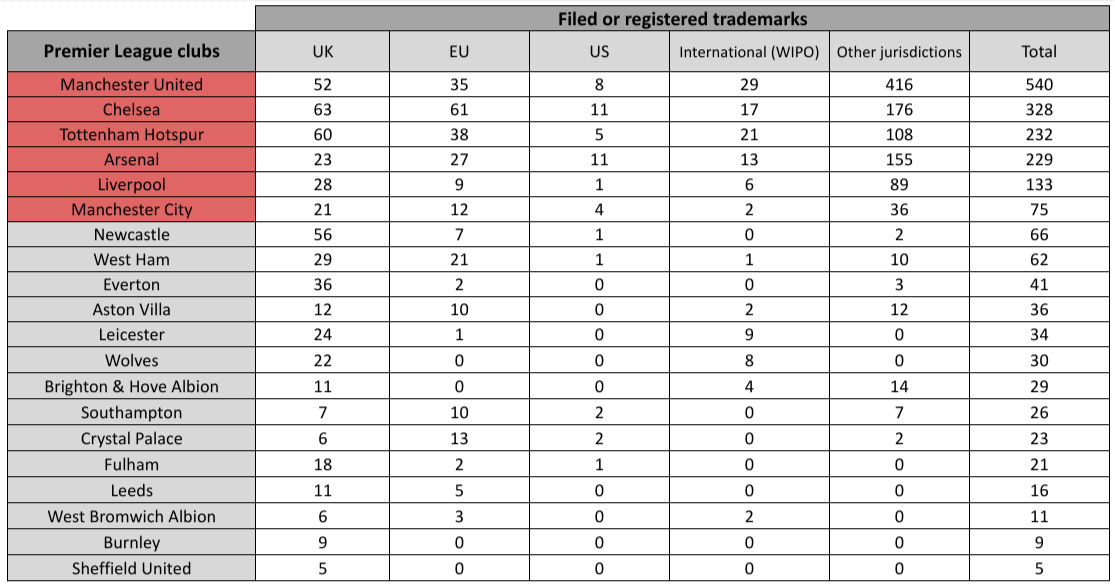 Table 2: Trademark portfolios of leading non-UK clubs (as of July 2020)

Table 3: Trademark portfolios of most expensive football players (as of July 2020) 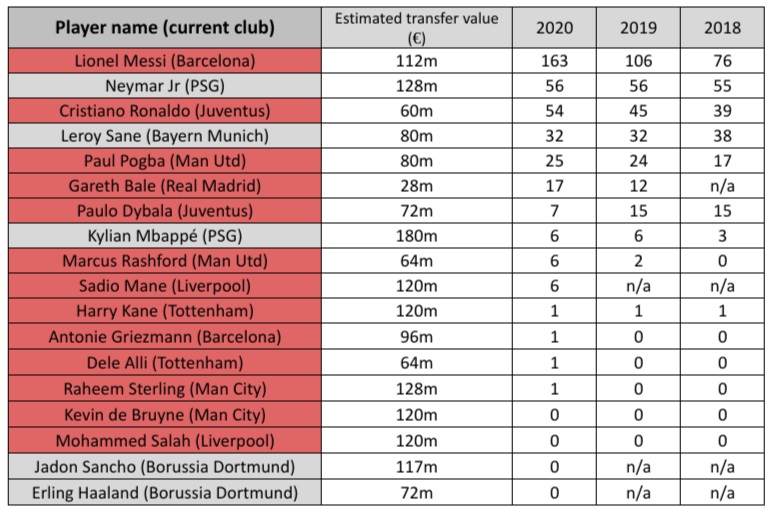