The General Court had annulled decisions of the First Board of Appeal of OHIM in which the latter had cancelled Community trademark (CTM) registrations Nos 1371244 and 1372580. The court had found that the Board of Appeal had erred in law in allowing additional material to be considered when applying Article 7(1)(e)(ii) of the Community Trademark Regulation (40/94), now the Community Trademark Regulation (207/2009). According to the General Court, OHIM had been wrong to rely on more than just the shape as it was reproduced in the application in assessing the marks at issue. However, the ECJ set aside the judgments of the General Court.

The circumstances of the cases are as follows. Yoshida Metal Industry Co Ltd obtained, in 2002 and 2003 respectively, registrations for two trademarks consisting of a two-dimensional representation of knife handles. The trademarks, depicted below, were registered for goods in Class 8 and 21 of the Nice Classification, including "knifes". 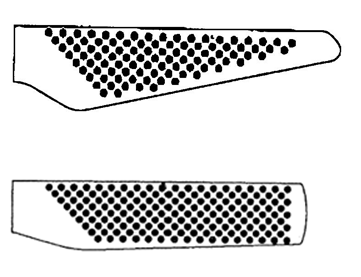 In 2007 three companies (Pi-Design AG, Bodum France SAS and Bodum Logistics A/S) filed a request for a declaration of invalidity of the marks on the grounds that they had been registered in breach of Article 7 of the regulation. The applicants argued that the marks consisted of a shape which is necessary to obtain a technical result (Article 7(1)(e)(ii)), as the black dots represented dents which performed a technical function - namely, to prevent the knife handle from slipping in the hand of the user.

In support of their arguments, the applicants submitted as evidence a US patent held by Yoshida, in which the handle of a knife was described as having “a non-skid structure comprised of an array of dents”. The patent was illustrated with a drawing, and the way in which the dots were depicted in this drawing was similar to the trademark registrations at issue.

During the examination process with respect to CTM No 1371244 (which was first denied registration as the examiner thought that the sign was devoid of any distinctive character under Article 7(1)(b)), Yoshida realised that the examiner misunderstood the mark, and described the sign as a two-dimensional representation of "the shape of a product”, namely the handle of a knife (a similar description was submitted in connection with the examination process for CTM No 1372580, where Yoshida said that the sign represented the “design of knife handles”).

However, after the filing of the requests for a declaration of invalidation, Yoshida described its marks not as the shape of a product, but as “arbitrary geometrical figures” or “a pattern of dots”.

The Board of Appeal declared that the trademark registrations were invalid, as the dots represented concave dents and the “signs consisted exclusively of the shape of goods which is necessary to obtain a technical result”. This conclusion was based on an analysis of the evidence submitted by the applicants for invalidation and material submitted by the trademark owner after the marks were registered (including photographs showing the actual use of the marks on the products), and thus not only on the representation and description contained in the applications (no description was actually provided).

Before the General Court and the ECJ, the issues were:

Both the General Court and the ECJ made it clear that Article 7(1)(e)(ii) is also applicable to two-dimensional signs consisting of the shape of goods within the meaning of Article 7(1)(e)(ii). The underlying purpose of this article is to ensure that no economic operator, through a trademark registration, obtains rights in a sign that exclusively incorporates a technical solution, regardless of whether the sign is represented as a three-dimensional mark or as a two-dimensional mark.

“the proper identification of the essential characteristics of a sign must be made on a case-by-case basis and the identification of the essential characteristics of a sign with a view to a possible application of the ground of refusal set out in article 7(1)(e)(ii) may, depending on the case, and in particular of the degree of difficulty of that sign, be carried out by means of a simple visual analysis of the sign or, on the contrary, be based on a detailed examination in which material relevant to the assessment is taken into account, such as surveys or expert opinions or data relating to intellectual property rights conferred previously in respect of the goods concerned” (Paragraph 48).

Since the General Court had found that the Board of Appeal had erred, in its analysis of the dots and their concave character, in referring to representations of the goods actually marketed by Yoshida, the ECJ set aside the decisions and referred them back to the General Court.

Product shapes cannot be registered if they consist exclusively of the shape of goods which is necessary to obtain a technical result, as trademark law must prevent the registration of marks that would grant their proprietor a monopoly on technical solutions or functional characteristics of a product. Neither the General Court nor the ECJ decided on this point in connection with the two marks at issue. One must bear in mind that this issue is to be judged using the criteria of trademark law, and the existence of patent rights in the product shape does not automatically make the shape inherently functional. However, the ECJ has accepted that the existence of patents can support the finding that a mark is objectionable under Article 7(1)(e)(ii).

The cases have now been referred back to the General Court, and it remains to be seen whether the court will agree with the Board of Appeal that Article 7(1)(e)(ii) is applicable and that, consequently, the marks must be declared invalid.