In Stokke AS v Registrar of Patents, Designs and Trademarks (MCA (TA Distr) 59175-12-12, November 26 2013), the Tel Aviv District Court has upheld the trademarks registrar's decision to refuse Stokke AS' application to register the image of its Tripp Trapp highchair as a three-dimensional (3D) trademark.

Stokke, a Norwegian manufacturer of children's furniture and equipment, applied in 2004 to register the image of its Tripp Trapp® highchair as a 3D trademark in Class 20 of the Nice Classification for "furniture, including chairs and children's chairs" (Application No 170443, claiming priority from CTM application No 3514171).

The Tripp Trapp highchair was created in 1972 as an innovative adjustable highchair, which was advertised under the tagline: "The chair that grows with the child". 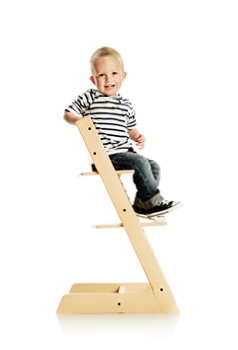 The examiner refused the application on the ground that it was ineligible for registration under Sections 8(a) and 11(10) of the Trademarks Ordinance (New Version) 5732-1972, due to:

When invited to show that the image was used as a trademark and that it had acquired a secondary meaning through use, Stokke adduced evidence of, among other things:

However, this failed to satisfy the examiner and the application was refused.

Following a hearing, the registrar - in a 2012 decision - reiterated the rule enunciated by the Supreme Court in the TOFFIFEE case (see also Ein Gedi Cosmetics Ltd v Israel Commissioner of Trademarks and Patents) and adopted in Circular Letter MN 61 of the Israel Patent and Trademark Office, according to which a 3D product shape cannot be registered as a trademark based on its inherent distinctiveness, but may be registered upon proof that the mark has acquired secondary meaning and has no aesthetic or functional role; where the product shape has a non-negligible aesthetic or functional role, it cannot be registered even if it has acquired a secondary meaning.

The registrar held that the shape of the Tripp Trapp highchair clearly fulfilled a functional role, in that it may be adjusted to accommodate children of any age (as well as adults) by changing the seat's height. While Stokke adduced evidence of various other designs of adjustable highchairs (arguing that the test to be applied was whether there were alternative ways to achieve the same functional result), the registrar held that allowing the registration of the shape as a 3D mark (with a possibly different outcome for its two-dimensional representation) would limit the competition in the market for adjustable highchairs.

The registrar further held that the shape of the highchair played an aesthetic role, and cited in support Stokke's evidence regarding its unique design, including prestigious awards and displays in museum exhibitions. Therefore, as it possessed a functional and aesthetic character, the highchair was held to be ineligible for registration as a 3D mark under the Toffifee criteria.

In addition, the registrar held that Stokke had failed to prove that the sign had acquired a secondary meaning, which, in accordance with the Ein Gedi ruling, is shown through factors such as:

In this case, despite long-term and extensive sales of the product, the use shown was in conjunction with the company name or the model name (ie, Tripp Trapp); moreover, no use was shown in Israel (only a single publication in Hebrew was presented, in which the highchair appeared alongside other highchair models).

On appeal, the Tel Aviv District Court upheld the registrar's decision. The court held that registration of a product shape as a 3D mark is an exception to the rule, which should be allowed only in extraordinary cases where the applicant has clearly shown that:

The district court clarified that, in Toffifee, the Supreme Court had not ruled out the possibility that, in rare cases, a product shape may possess inherent distinctiveness; however, it had excluded the possibility of relying on it to register a product shape, because the requirement that the mark must not have a functional or aesthetic role, by itself and in the absence of a clear test for examination, does not suffice to prevent improper registrations. Based on Toffifee, the district court rejected the notion that a secondary meaning may suffice for registration, notwithstanding the existence of a functional or aesthetic role.

The district court refused to interfere with the factual determination of the registrar as to Stokke's failure to prove a secondary meaning by showing that the public associates the mark with itself (eg, through a consumer survey - the mention of a Swedish survey in Stokke's affidavit was not deemed acceptable evidence, as it did not relate to consumer recognition in Israel). The court further rejected the argument that the image of the chair was recognisable by the Israeli public as it was well known across the world, and held that there was no alternative to proving recognition by evidence, even if recognition in Israel derives from a global reputation.

Finally, the court rejected Stokke's argument that a functional or aesthetic role that would render a product configuration unregistrable can only be a "dominant" one. The Supreme Court had held in Toffifee that such role had to be substantial/significant (ie, not negligible). The court agreed with the registrar's conclusion that the shape of the chair was dictated by, among other things, functional and aesthetic considerations. The court also noted that the CTM application cited by Stokke had been refused.

The appeal was thus denied and costs of IS10,000 were awarded against Stokke.