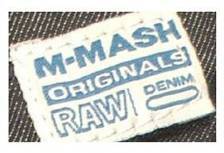 Jessup J considered these labels to be very similar, despite the use of 'M-Mash' rather than 'G-Star' and the reversal of light and dark colours. While the words 'originals', 'raw' and 'denim' might be descriptive by themselves, in the present circumstances this did not detract from the conclusion of deceptive similarity. He accepted that:

“the mere use of descriptive words would not provide a very propitious basis for an action for infringement, but here we have more than the mere use of descriptive words. In the respondents’ label the words are used in the same appearance and orientation, and relationship as between each other, as may be seen on the applicants’ mark. To the extent that these words are descriptive, that circumstance is not, in my assessment, sufficient to detract from the conclusion as to deceptive similarity which I would otherwise draw.”

G-Star’s claim that this label was deceptively similar to Registration 883618 was considered weaker due to:

Nevertheless, Jessup J found that someone viewing the Mish Mash label would be caused to wonder whether it was the registered mark: “The rugged brutality conveyed by the simple lines, rectangular shapes, the bold writing and the hyphen itself are, in my view, elements of the mark that find sufficient reflection in the label to justify a conclusion of deceptive similarity”. 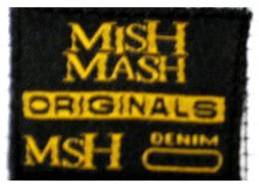 He did not think that people would be confused when they saw this label, despite a similarity in style, due to the appearance of the words 'Mish Mash', which were described as “visually compelling”. The substitution of 'Mish Mash' for the abbreviated 'M-Mash' term served to remove a link to those familiar with the G-STAR mark.

While the marks shared the words 'raw' and 'denim', the similarities are “manifestly insufficient to give rise to the likelihood of confusion”.

While he viewed this case as “a little stronger” than the preceding claims, the descriptiveness of the words 'raw denim' meant that there was no infringement. In addition, Registration 999350 covers clothing franchise services that were not considered to be closely related to clothing products.

G-Star also brought a claim for copyright infringement, alleging that Mish Mash’s use of the similarly designed labels infringed the copyright in the label that is the subject of Registration 883618. Jessup J viewed the mark as a rectangle which contained internal divisions and drawn elements into which the verbal elements were fitted. As such, it represented more than a series of words and numerals laid out in a particular spatial arrangement. On this basis, Jessup J held that G-Star’s mark represented an original “artistic work” that was entitled to copyright protection.

G-Star argued that each Mish Mash label was an “accessory” and claimed liability under the provisions of Section 37 of the Copyright Act 1968 (Cth). Interpretation of that section has not arisen in previous cases and Jessup J defined the relevant question to be answered as: “if the only difference is that the article was made in Australia by the importer rather than being made elsewhere, would the making of it have constituted an infringement of copyright?”

The labels made for Mish Mash were based on similar R-OBIN labels made in Turkey and, in light of the similarity in the labels and the fact that G-Star’s garments had been sold in Turkey, Jessup J concluded:

“The similarities between the applicants’ work and the R-OBIN label are, in my view, so striking as to justify the inference, in the absence of evidence from the respondents, that the latter was copied from the former, either directly or by way of undisclosed intermediate drawings. If the respondents were to resist the drawing of that inference, it was, in my view, incumbent upon them to lead evidence that the R-OBIN label had been created independently of the applicants’ work. There was no such evidence; neither was there any explanation of why.”

Consequently, G-Star’s claim for infringement under Section 37 was upheld against the first two labels above, being those where trademark infringement was also found.

Mr Yildirim was found not personally liable because, while he was involved as a director, he did not use the company “as the instrument for his own wrong”. G-Star sought an award of damages but failed to bring evidence sufficient to establish the damage suffered and to enable the court to calculate damages.

This case makes it clear that that the design and layout of a label can be important in determining issues of trademark infringement.