In Lonsdale Sports Ltd v Erol ([2013] EWHC 2956 (Pat), October 4 2013), a trademark opposition filed by sporting goods company Lonsdale Sports Limited against an application for sporting goods that was reminiscent of Lonsdale's cinemascope logo has succeeded on appeal to the High Court on the basis of the reputation of Lonsdale's 'family' of trademarks. 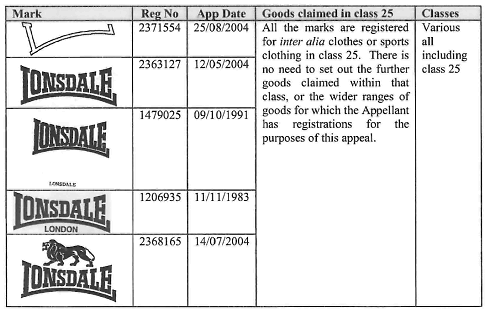 Lonsdale opposed a UK trademark application filed by Erol for the following mark in Class 25: 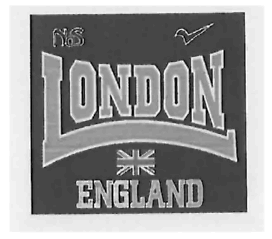 Lonsdale opposed the application on two grounds. The first, under Section 5(2)(b) of the Trademarks Act 1994, was that there was a likelihood of confusion between the Lonsdale marks and the Erol application on the basis of the identity of the goods concerned and the similarity of the marks. The second ground, under Section 5(3) of the act, was that the application took unfair advantage of, or was detrimental to, the distinctive character of Lonsdale’s marks.

The hearing officer assessed Lonsdale’s opposition by selecting two of the number of marks Lonsdale sought to rely on, on the basis that these marks represented Lonsdale’s “best case”. These were Lonsdale’s main logo and elongated 'L' mark. On Article 5(2)(b), the hearing officer considered that, whilst there was modest degree of visual similarity, the marks were aurally and conceptually different. She also found that Lonsdale could not rely on the elongated 'L' mark as it had not been used "as and of itself", only being used as part of Lonsdale's main logo. On Article 5(3), the hearing officer found that Lonsdale's marks had a reputation, but that the link between these marks and the application would not lead to a change in the economic behaviour of the average consumer, members of the public who purchased sporting goods. Both grounds of opposition were rejected by the hearing officer on February 27 2013, and Lonsdale appealed the decision to the High Court.

Mr Justice Norris grouped Lonsdale’s grounds of appeal into five categories, which he addressed in turn. The first concerned the fact that the hearing officer had based her decision on two of Lonsdale’s marks which, in her view, represented Lonsdale’s strongest case. In particular, Lonsdale noted that one of its trademarks had the word 'London' beneath the Lonsdale logo, which would have increased the visual and conceptual similarities between the two. The judge considered that the hearing officer should have given Lonsdale the opportunity to address her on the marks representing Lonsdale's best case and that this should have included the LONDON mark. Nevertheless, narrowing the aural and conceptual similarities of Lonsdale's marks with the application would not have led to a different result. The judge was satisfied that the hearing officer's error had not led to an incorrect conclusion.

The second ground of appeal also related to the hearing officer's decision to select two of Lonsdale's marks as Lonsdale's best case. Lonsdale submitted that this failed to take into account that these marks were part of a family of marks subject to extensive use. Lonsdale noted that there is no enhanced protection for a family of marks, but submitted it is a factor to be taken into consideration when assessing the reputation of the marks. Norris J, in rejecting this ground of appeal, considered that the hearing officer had recognised that the marks selected did not stand alone and that her approach did not lead her to err when assessing reputation.

The third ground of appeal challenged the hearing officer's finding that the elongated 'L' mark could not be taken into consideration as it had not been used "as and of itself". Norris J agreed that this was not correct in law. He referred to the decisions of the Court of Justice of the European Union in Nestlé v Mars (Case C-353/03) and Colloseum Holding AG (Case C-12/12), from which it is clear that use of a trademark may arise as a component of another trademark or in conjunction with a registered trademark. However, he did not consider that this error in principle affected the outcome of the hearing officer's decision. Proper consideration of the elongated 'L' mark would not have led to either ground of opposition being sustained.

Lonsdale's final ground of  appeal related to Article 5(3). Lonsdale submitted that the hearing officer appeared to accept that a link would be created in the mind of the average consumer, but concluded that it would not create an unfair advantage with giving reasons for doing so. Norris J agreed that the hearing officer had recognised that a link existed between Lonsdale's marks and the application. He also accepted Lonsdale's submissions that the hearing officer had failed to appreciate that Lonsdale could not prove actual detriment because the application was not yet in use and it was self-evident that Erol saw an advantage to registering the mark which derived from an association with Lonsdale's marks. Norris J considered that had the hearing officer taken into consideration Lonsdale's elongated 'L' mark and LONDON mark, the opposition should have succeeded under Article 5(3). The link with the Lonsdale marks would be of benefit to Erol, particularly if Erol's mark was seen by the average consumer on someone wearing an Erol product. Accordingly, the appeal was allowed.

Lonsdale's opposition was ultimately successful on the basis of the reputation of its marks. Norris J found that had the hearing officer taken into account the reputation derived from Lonsdale's elongated 'L' mark and its "family" of marks then she should have allowed the opposition. This case demonstrates the value of holding separate registrations for the key elements of a company's branding where such elements qualify for registration either through their inherent distinctiveness or through their use in a composite registration.