Decision shows value of reputation in likelihood of confusion analysis

Reputation may have been “an idle and most false imposition” according to William Shakespeare, but this is clearly not the case when it comes to trademarks – as demonstrated in Energy Group SRL v Specialized Bicycle Components Inc ([2013] NZIPOTM).

This decision reflects the value of reputation, not only in terms of the protection afforded to owners of well-known marks but also in connection with the analysis of whether there is a likelihood of deception or confusion. Why? There is no doubt that the marks in issue were similar, but saying the same about the goods was more contentious.

The opponent, Specialized Bicycle Components Inc, had a raft of registrations for its longstanding device, pictured below:

The opposed marks mirrored that device, incorporating this element into the overall look of its marks, being:

However, the difficulty was that the marks applied for covered energy drinks, soft drinks, sports drinks, juices and mineral waters in Class 32 of the Nice Classification. Without registered rights in place for the identical goods, arguments focused on reputation, the sponsorship services for which Specialized had registered protection and the likelihood of confusion and deception, among other things.

The assistant commissioner adopted a pragmatic and commercial approach, as is appropriate, in the assessment of whether the applicant’s use of its devices would be likely to cause deception or confusion with the opponent’s mark contrary to Section 17(1)(a) of the Trademarks Act 2002. It was one of two key grounds in which Specialized’s registered rights and reputation worked together to point to a likelihood of confusion, with the assistant commissioner stating that "some of the goods (such as [Specialized’s] empty drink bottles) and services (such as [Specialized’s] sponsorship activities in connection with the Monster Energy mountain bike team) are related".

Overall, a likelihood of confusion and deception was found. However, the assistant commissioner continued to survey the reputation of Specialized in New Zealand, eventually finding the opposition successful also on the basis of its well-known reputation under Section 25(1)(c) of the act.

In New Zealand, the door to stopping use of a mark on other goods is always open via Section 25(1)(c). To succeed on this ground, the owner must prove that:

Evidential requirements in New Zealand are high. As such, the burden for establishing that a mark is well known is not insignificant; nor will any assumptions be taken for granted. 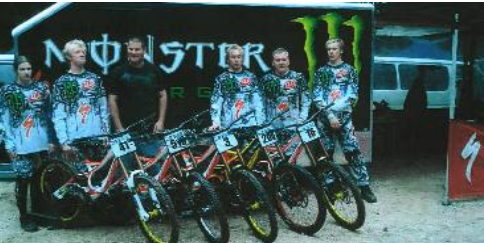 Because Monster Energy is an energy drink brand, this sponsorship was particularly important in helping to bridge the divide between cycling and energy drinks.

However, the reputation of Specialized did not stop there. It extended to more than 76 stores through New Zealand, including six concept stores, as well as the manufacture of its own drink bottles bearing the following device:

While drink bottles were not held to be similar to the opposed’s beverages, such use added another layer to the depth of Specialized’s reputation. Further building on this, more than 2 million customised bottles had been designed and distributed in deals involving Specialized and leaders in the beverage industry, including Gatorade, Powerade and Vitamin Water.

With each piece of evidence reinforcing its overall reputation, the assistant commissioner was drawn to the inevitable conclusion that the device owned by Specialized is well known. Having taken this first step, the assistant commissioner determined that a substantial number of persons would “be caused to wonder” or indeed confused if the applicant’s marks were permitted.

With the reputation, connection and prejudice established, it was an easy sprint to the finish for Specialized.

James & Wells acted for the opponent in this case