The courts have extended the cross-category protection of the trademark 华素 by finding “toothpaste, etc” in Class 3 to be similar to “medicines for human purposes” in Class 5 based on the high distinctiveness and public awareness of the opponent's trademarks, as well as on market realities.

On November 8 2005 an individual named Lian Jinhui filed with the China Trademark Office (CTMO) an application for the registration of the trademark 华素 (the opposed mark) for “toothpaste, cleansing milk, shampoo, bath foam, anti-bacterial hand wash, cosmetics, etc” in Class 3. 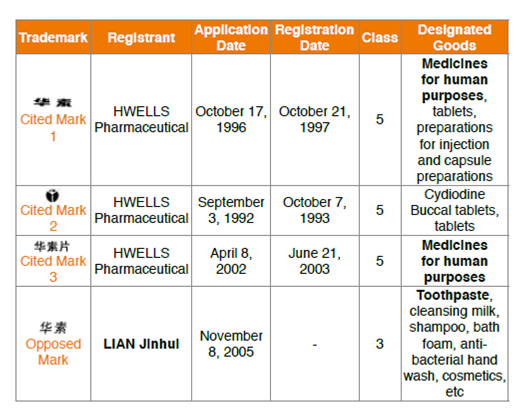 HWells Pharmaceutical filed an opposition on the ground that the mark was similar to its registered trademarks and was used on similar goods.

The opposition was rejected by the CTMO.

HWells Pharmaceutical appealed to the Trademark Review and Adjudication Board (TRAB).

The TRAB held that, although the designated goods "toothpaste, etc" covered by the opposed trademark fell under the category of daily cleansing products, such goods were somehow associated with the designated goods “medicines for human purposes, etc” covered by the cited marks in terms of their functions, uses and target consumers. Such association, in addition to the high awareness of the cited marks in respect of “medicines for human purposes, etc”, was likely to cause confusion among the relevant public as to the source of the products. The TRAB overruled the decision of the CTMO and decided that the trademark applied for should not be registered.

The court further echoed the TRAB’s findings that the opposed mark was similar to the cited marks and was used on similar goods.

On account of the cited marks’ high distinctiveness and public awareness, as well as the market reality that daily chemical products such as drugs and cosmetics are usually produced by the same manufacturers and distributed in the same stores, the court considered that, if the opposed mark were to be used on toothpaste and the other designated goods, the relevant public might be misled into believing that HWells Pharmaceutical was somehow associated with such goods, thus resulting in the misidentification of the source of these goods. Based on the aforementioned reasoning, the court found that the opposed mark was in violation of Article 28 of the Trademark Law 2001 and should not be approved.

Lian then appealed to the Beijing High Court, which upheld the lower instance's decision.

In this case, the TRAB and the courts of both instances held that the opposed trademark for “toothpaste, etc” in Class 3 was similar to the cited trademarks, registered for “medicines for human purposes” in Class 5, and that the marks designated similar goods.

Such finding of similarity is not simply based on the “Classification Table of Similar Goods and Services”. The TRAB and the courts took into account the high distinctiveness and public awareness of the cited trademarks, as well as the fact that products such as drugs and cosmetics are usually produced by the same manufacturers and distributed at the same stores, which was likely to cause confusion among the relevant public.