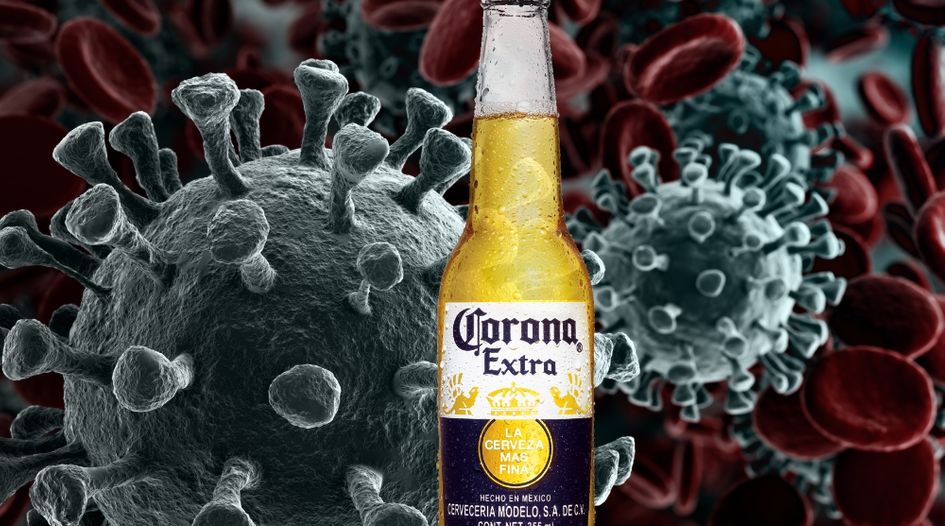 Over 17,000 cases have been reported of coronavirus across 25 countries since the current global health emergency commenced. The vast majority of the cases are concentrated in Wuhan, Hubei and so far, only one of the reported 362 deaths (at time of writing) took place outside of China. Nevertheless, the coronavirus has quickly become a global news story. While there’s cause for alarm for many industries whenever a potential new pandemic arrives, one company has found itself in the spotlight for a different reason – Corona beer brand.

Produced by Cervecería Modelo in Mexico, Corona beer has been increasingly searched for on Google in connection with the virus. Google Trends data shows search numbers for ‘corona beer virus’, ‘beer virus’, and ‘beer coronavirus’ have been growing. Between 18 January and 26 January, searches for ‘corona beer virus’ increased by 2,300%, according to a report by Business Insider. In the same time period, searches for ‘beer virus’ went up by 744% and searches for ‘beer coronavirus’ increased by 3,233%. The places searching for the terms most includes Cambodia, Canada, Chile, China, and the US.

The potential brand damage that the association may cause will undoubtably have been a conversation rattling around Cervesería Modelo’s offices. For now, Constellation Brands – which distributes the beer in the US – has shrugged off any concern, Maggie Bowman, senior communications director said that “consumers, by and large, understand there’s no linkage between the virus and our beer business”. The Google search data, however, suggests that some are making that link, highlighting again how an incident outside of a brand’s control can have impact. A New York Times article details how the HIV/AIDS EPIDEMIC in the 80s harmed sales of diet candy ‘Ayds’. Stock prices in the parent company, Constellation Brands, may not have dropped since the crisis, as was pointed out on Twitter by Joonas Tuhkuri. However, that does not paint a full picture on how the beer brand may be approaching the situation.

Even if the vast majority of people aren’t making the association, there still could be damage to the brand’s goodwill just because of the similar names. Trademark attorney and founder of Gerben Law Firm, Josh Gerben, notes: “The vast majority don’t think they’re tied. But you don’t know what the subliminal messaging is here.”

Naturally, the first port of call for any trademark professionals in such a situation  would be to keep an eye on the way the name is being used and ensure against issues of dilution or disrepute in the marketplace. The virus name itself isn’t a trademark issue directly, but the brand should be cautious about other actors using it. “It’s probably on their radar to make sure no one else is being opportunistic to use their name in combination with the virus to tarnish the brand,” Gerben expands.

It’s unlikely that another beer brand would take such a serious global situation as an opportunity for a cheap advertising pot-shot, but the lines of parody can be blurry and it’s not unfeasible that the beer’s name could be implied with a relation to the virus. Gerben warns: “You could start to see some of that and so it’s important to watch those closely to see if they cross the line to something that infringes the brand.”

In fact, a South China Morning Post article details some of the memes that have already spread around the internet relating the beer brand to the deadly virus. One picture shows a bottle of Corona placed opposite a group of Heineken bottles with a face-mask covering them. Also playing on the link, House on Hood bar in New Zealand has offered discounts on Corona beers “every day while the pandemic lasts” (Corona’s distributor in New Zealand has reportedly asked for the promotion to be discontinued).

Similarly, the brand will want to keep an eye on media mentions of the virus that don’t clearly distinguish between the beer brand’s name. Were coronavirus to start being written about without the ‘virus’ suffix, then Corona would need to act. “I don’t think they will ever drop the word ‘virus’, but they may have to nudge people if that started to happen,” Gerben states. A quick check of the USPTO’s registry shows that two marks WUHAN CORONA VAX and WUHAN CORONA MVAX were filed on 27 January. Although the two marks are in relation to vaccines and contain other word elements, they have notably removed the ‘virus’ suffix from the name.

However, Gerben also believes that, in the current crisis, Corona may be able to increase its brand reputation – provided that any attempts are not read as cynical and opportunistic. “If they can balance genuinely providing help to the province by doing something like providing supplies, you could perhaps see a tie-in from a branding perspective. You would be able to help build some equity in your brand in otherwise unfortunate circumstances.”

One example of a brand using its market position to help in the coronavirus outbreak is Google, which launched an SOS Alert in partnership with WHO. This means anyone who searches for the virus on Google will receive the SOS Alert at the top of the page. Additionally, Google has also issued a $250,000 direct grant to the Chinese Red Cross to help with relief efforts. “It’s common for brands to help with relief efforts in a crisis,” Gerben concludes - adding: “When better than when you share a name with it?”

Whether that is the approach followed remains to be seen. However, the current online parodies using the Corona brand serve as a reminder of the way that a brand can find itself in the spotlight through no faulty of its own.