Controlling Black Lives Matter: the battle to trademark a movement 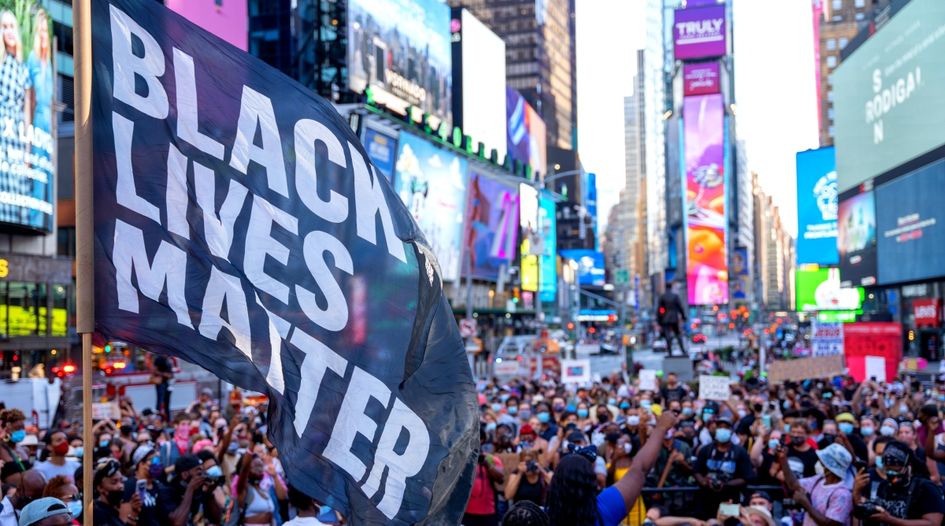 The Black Lives Matter (BLM) movement returned to the global spotlight this year following the killing of Minneapolis resident George Floyd. A new WTR investigation has found over 50 attempts to register Black Lives Matter brands in 2020 so far, with one activist telling us that legal protection is necessary “so that people can't profit from it who haven't shed blood for this movement”.

The BLM movement began in July 2013 following the acquittal of George Zimmerman in the killing of African-American teenager Trayvon Martin. It generated global headlines during protests spurred by the deaths of Michael Brown and Eric Garner in 2014, and again in 2020 following the killing of George Floyd. In fact, it is estimated that between 15 million and 26 million people have participated in the 2020 Black Lives Matter protests in the United States so far this year. While it is understood to be a decentralised social movement of activists with no formal hierarchy, over 30 local chapters have been set-up by the originators of the #BlackLivesMatter hashtag.

Unsurprisingly, like any globally-recognised term, individuals and entities have filed trademark applications related to Black Lives Matter. The earliest attempt was at the US Patent and Trademark Office (USPTO) in January 2015 by Chicago resident Michael Southern, owner of a business called ‘Crazy4tshirts’. That BLACK LIVES MATTER application was filed in Class 25 for shirts and hoodies. It was refused because, according to the USPTO examining attorney, “the public would not perceive the slogan BLACK LIVES MATTER as source-identifying matter that identifies applicant as the source of the goods but rather as an expression of support for anti-violence advocates and civil rights groups”. The filing was subsequently abandoned.

Various trademark applications have been lodged since then, including for the exact term and parodic versions of it (eg, BLACK OLIVES MATTER and BLACK DOGS LIVES MATTER). Nearly all have been refused or abandoned, with the exception being a 2015 filing for the term ‘BLACK LIVES WILL MATTER TO THEM. WHEN BLACK LIVES BEGIN TO MATTER TOO US’ from two New York residents, which reached registration in 2017 (following an initial refusal). From 2015 to 2019, no applications related to the movement had been made outside of the US.

However, this year Black Lives Matter-related trademark filings have become a more regular occurrence. Research from WTR has identified at least 51 applications related to the movement filed since June 2020, including dozens in the days following the death of George Floyd. Some of those attempts have been well publicised, including when a UK-based businessman sought protection of the terms BLACK LIVES MATTER and I CAN’T BREATHE (the phrase repeatedly used by Floyd when he was pinned down for more than eight minutes by a police officer). In an interview with WTR at that time, the businessman explained he planned to launch non-profit organisations with those names. However, following a viral backlash, the applications were withdrawn.

Since June, applications for the term have been filed around the world. Outside of the US, the most prevalent are filings in Europe. For example, two applications were recently filed for BLACK LIVES MATTER at the EU Intellectual Property Office by German resident Axel Bürger covering over 100 goods and services. Tellingly, the recent trademark activity of Bürger (for terms including ANTIFA, ANTIFASCHISTA, MIGANTIFA) indicates he may not necessarily be a supporter of the movement (WTR has reached out for comment).

In Latin America, a filing for a colourful Black Lives Matter logo was made earlier this month in Brazil by Denagnon Euphrem Fiagbenou. Over in Asia-Pacific, there has been significantly less trademark activity related to the movement (including no sign of a filing at the Chinese trademark office). However, there was a filing in Australia last month for BLACK LIVES MATTER (and another for BLM) for alcoholic beverages. In that case, the applicant is a Sydney-based company called BLM Beer Pty Ltd which appears to have also registered a domain (‘blmbeer.com’). In June, another application was lodged in Australia for BLACK LIVES MATTER by the company Social Transport. Following an email from WTR, its managing director Bradley Stiles stated “the mark has been abandoned” – with the IP Australia website confirming the application was abandoned on 23 July.

With protests still taking place across the United States, it is unsurprising that a bulk of the applications related to the movement are at the USPTO. Recent examples include:

Many of the filings are for unique designs of Black Lives Matter logos and are not seeking legal protection in only the words. For example, Milwaukee resident Alice Pugh is seeking trademark rights in an image that includes the American flag and the term #BLACKLIVESMATTER. Talking to WTR, she explained the application was filed “to prevent the misuse of someone profiting off the design without consent”, adding: “I am basically giving the current flags away to the protestors. Some say ‘Black Lives Matter’ and some say ‘I Can't Breathe’. If the design or its likeness is used for mass production without my permission, then I plan to enforce ownership.”

Talking to WTR, the chairman of Black Lives Matter's Greater New York chapter, Hawk Newsome, revealed why obtaining trademark protection for the logo was so important. “Firstly, our logo is distinct and unique – it embodies the pan-African flag, which was created by Marcus Garvey 100 years ago and is a celebration of the realisation that all black people across the continent are connected and share a common struggle,” he explains. “Secondly, Black Lives Matter New York has worn this logo for quite some time and it's been published in media across the world. It is something that we designed, it's ours, and it happens to be cool. Thirdly, it's our uniform, and we want to secure it so that people can't profit from it who haven't shed blood for this movement.”

Expanding on what the logo embodies, Newsome says that it has been emblazoned on shirts and banners across the United States. “We were in Charlottesville for the riots, we were in Minnesota for George Floyd, we've shut down highways consistently for five years – and we wore these shirts throughout,” he says. “We also had a television programme on BET called Cop Watch America, and we wore our logo on it. It is our thing. We have given away thousands of shirts in an effort to support and spread the message. We've now reached a point where the movement is fashionable and people want to make money from it.”

Indeed, Newsome says that counterfeit Black Lives Matter fashion items are prevalent across New York, with many – or perhaps most – being sold by entities with no relation to organisations that support the movement. Recently, he adds, he spoke with people who claim to make “two or three thousand dollars per day” selling Black Lives Matter shirts on the street. “I would say to them, 'what are you really doing for this movement?' and that's what it comes down to. There are folks who don't care about Blacks Lives Matter, who are shrewd capitalists who only want to use this logo and this movement to make money. We actually use the T-shirt money to fund our trips, we use it to buy posters and materials, we use it to educate people (we are actually opening a school in the Bronx this week), and we use it to literally feed people during covid. We are not just selling T-shirts for profit, it goes back into the organisation to fight for liberation."

The New York chapter was inspired to file for a trademark application after discussions with trademark attorney Christopher Serbagi, owner of New York firm Serbagi Law. “He was the most influential person in this decision, he really laid it out about why we needed trademark protection,” Newsome says. “This is a man who gets paid thousands of dollars to do something like this, but he did it pro bono because he believes in Black Lives Matter. So Christopher did for us what I hope other people do to help the movement. He gave his skill and his time to help us fight anti-blackness and racism."

On top of that, Newsome hopes that other allies of the movement, especially off-shoots and area-wide chapters, consider trademark protection to help fight against illicit activity of BLM designs. “It's a great way for people around their cities and towns to see their brand and understand that it is a resource – a sign of where they can get help,” he says. On the flip-side, addressing those that use Black Lives Matter logos and imagery without permission, he states: "They need to stop and should be shut down. They need to be identified so people know not to purchase their products. If they are serious, then they should be donating their money to the movement."

It is clear that Black Lives Matter is a defining movement of the age. For that reason, attempts to gain control of the term through trademark rights will no doubt continue – both from supporters and detractors of the movement. When it comes to the trademark community, perhaps following in Serbagi’s footsteps and showing support through pro bono work (as WTR suggested in June) could be a positive step forward.