Swartkops has been manufacturing and selling various salt products under the Marina brand since the 1950s. In 1980 Swartkops launched its braai salt with the get-up depicted below, the distinctive features being the 400-gram orange plastic container, with a brown cap, featuring the Marina brand name in a white oval with a smaller oval containing a logo directly above it. The words 'braai salt' appears directly below the Marina brand name with a depiction of meat on a braai stand. The salt inside the container is yellow in colour. 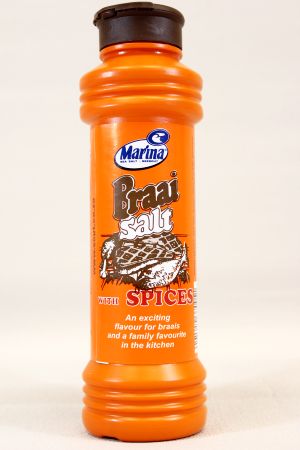 Cerebos is a competitor of Swartkops and has been manufacturing and selling its salt products under its Cerebos and Buffalo brands since 1965. Unlike Swartkops, Cerebos only launched its braai salt with the get-up depicted below in 2010. The features of the Buffalo product comprise a 400-gram orange plastic container, with a brown cap, featuring the Buffalo brand name in a white oval with a smaller oval containing a logo directly above it. The words 'braai salt' appears directly below the Buffalo brand name with a depiction of meat on a braai stand. The salt inside the container is yellow.

In 2011 Swartkops launched passing-off proceedings in the Eastern Cape High Court based on the similarity of the get-up between the products. This matter was heard by Acting Judge Rorke, who found that Swartkops “had set out sufficient evidence to establish the necessary reputation in its braai salt products”, which is the first requirement in passing-off proceedings.

However, the second requirement in respect of passing-off proceedings, in terms of which the applicant should prove that the “impugned product is likely to confuse or mislead members of the public into believing that the product is that of the applicant or is associated in the course of trade with the applicant”, was the subject of the appeal to the full bench in Grahamstown.

Acting Judge Rorke had found that Cerebos had sufficiently distinguished the get-up of its braai salt from that of Swartkops’ and that there was therefore no prospect of confusion on the part of the ordinary consumer. He reached this conclusion despite the evidence of two instances of actual confusion tendered by Swartkops.

In finding that that there was no likelihood of confusion by the get-up of the two products, the court a quo had erred by:

The full bench was of the view that the court a quo had lost sight of the important principles laid down in an earlier case (Blue Lion Manufacturing (Pty) Ltd v Natural Brands Ltd) in respect of passing-off proceedings based on get-up. In this matter, the court had held that “few witnesses will bother to go back to the manufacturer to complain about a small purchase and that purchasers are likely go the retailer to obtain satisfaction or just learn for the next time”. Interestingly, in this matter only one incident of actual confusion was tendered and accepted as evidence to indicate actual confusion on the part of an average consumer.

Based on this principle, the full bench ruled, in the Swartkops matter, that the evidence of the two consumers who experienced confusion with the competing product, on the basis of its get-up, was sufficient to establish actual confusion on the part of an average consumer.

The court a quo had also failed to take cognisance of the principle of what an ordinary everyday buyer of commodities such as groceries would be. This is a person:

“who has a general idea in his mind’s eye of what he is looking for, who however, does not have an accurate representation of it, who will not have the advantage of seeing the two products side-by-side, who will not be alerted to single out similarities and differences between the products”.

Critically analysing the similarities and differences between the products by the court a quo should therefore not have been the emphasis in determining whether the get-up of the two products is likely to confuse an average consumer.

Although it is important to consider individual elements of the relevant products as well as the whole of the get-up of the products, it is of greater importance to consider the impact of the get-up on the mind of an average consumer when purchasing products.

Further, this judgment confirmed that the determination of whether an average consumer would be confused with the get-up of two products should not be based on the number of actual consumers who experienced confusion. In fact, confusion of one or two individuals could be sufficient to indicate confusion on the part of an average consumer.