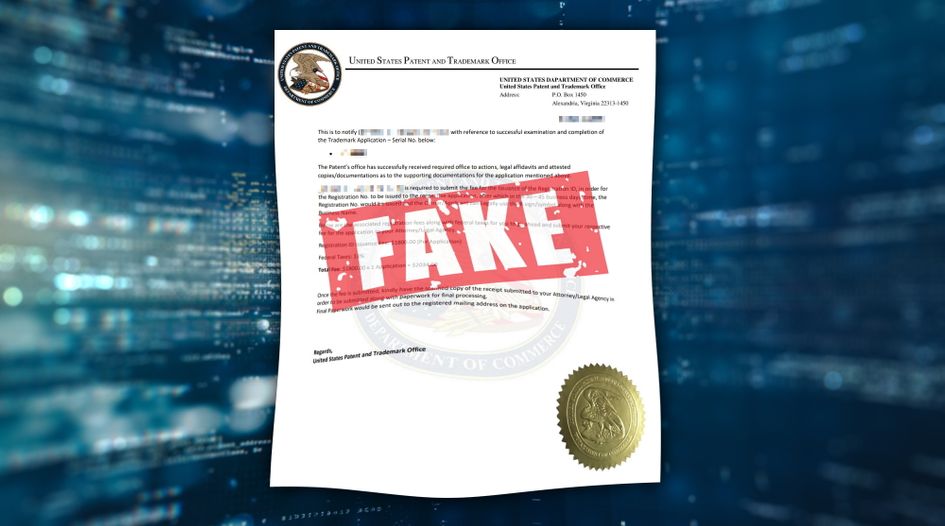 The issue of suspicious low-cost trademark filing agencies targeting US business owners continues to be a problem facing the USPTO. This week WTR spoke to a victim of one such platform, Trademark Centric, who revealed they were recently sent a forged USPTO document requesting unnecessary fees.

Since our first reporting on this issue in February 2021, fraudulent schemes targeting US business owners by offering low-cost trademark services have been on the rise. Some of these platforms (including the now-infamous Trademark Terminal) have been linked to suspicious activity on thousands of US trademark applications and big money has been spent on Google Ads to promote the sites.

While there are legitimate online filing offerings, the challenge for consumers is telling the good from the bad, in an environment in which platforms crop up regularly and dominate Google results.

The following trademark filing platforms, for example, have been featured in WTR coverage this year as being suspicious. While each of these platforms contain elements similar to other sites that have been proven to be fraudulent, it is important to clarify that most have not been formerly accused by the USPTO as conducting illegal activity:

And new offerings keep appearing. This month WTR identified a number of relatively new low-cost filing platforms, some of which are advertising on Google.

One is Brand Mark Protect (‘brandmarkprotect.com’), which has an estimated monthly Google budget of $12,700 (according to analytics tool SpyFu), with ads that claim to offer “$45 trademark registration” (screenshot). The website claims to “have helped over 1M+ business owners register their copyright, and trademark”, despite the site being registered in July 2022.

Meanwhile, Trademark Deluxe (‘trademarkdeluxe.com’) has been around longer (registered in January 2022) and only claims to have helped “hundreds of businesses”. It is also only spending an estimated $1,100 a month on Google, with one ad claiming the firm is “best American company” and also offering a $45 trademark registration (screenshot).

On the pricier side, Go Legal Trademark (‘golegaltrademark.com’) is spending an average of $1,090 a month on Google, with one ad offering to “file trademark in $69” with “guaranteed satisfaction” (screenshot). That site was registered in September 2022. Its Twitter account is currently suspended for violating Twitter’s rules.

Elsewhere, the domain for Deputy Trademark (‘deputytrademark.com’) was registered in April 2022. The platform is spending an estimated $3,860 a month on Google advertising - with ads that claim to register a trademark for $45 “in just a few clicks” and with “100% success rate” (screenshot).

Finally, IP Legal Firm (‘iplegalfirm.com’) was registered in October 2022 and has a near-identical website to platforms previously identified as suspicious (such as Trademark Regant and Trademark Licit) and also shares the same office address and testimonial quotes. It is not currently advertising on Google. Curiously, both Deputy Trademark and IP Legal Firm share the same representative on their live chat (‘Mike Greene’).

WTR contacted each of the above platforms. At least two appeared to block WTR shortly after we reached out.

With thousands of dollars being spent on trademark-related Google keywords, these filing platforms – which claim to offer incredibly low-cost trademark services – often attract small business owners from across the US. Last year, for example, we spoke to one victim who was defrauded out of more than $100,000 after moving forward with promises of registered trademarks and patents. This week, WTR learned of an individual’s negative experience with Trademark Centric, an active filing platform that is spending an estimated $24,000 on Google ads per month, according to analytics site SpyFu. Despite its About page claiming the agency has filed ‘1 million’ trademarks (alongside a roster of ‘expert consultants’ represented by a range of stock photos), WHOIS records reveal the site was registered in January of this year. On ScamAdviser, across 15 reviews, the term ‘scam’ is used nine times.

In emails seen by WTR, the individual first contacted Trademark Centric in the second quarter of this year. It is understood they paid the initial filing fee, as well as the cost for a search report. A search on the USPTO database confirms that a trademark application was filed by a Trademark Centric representative three days later (it is worth noting on the application, the applicant’s phone number is listed as Trademark Centric’s office phone number – behaviour we’ve noted in the past). According to the USPTO database, the application has not yet been looked at by an examining attorney (this is unsurprising, as USPTO first office action pendency time is currently over eight months).

Nevertheless, last month, a Trademark Centric representative sent an email to the victim claiming that the application had been successful, with “all verifications and examinations completed”. A document, purported to be sent from the USPTO, was attached to the email requesting a “final clearance document and registration IDs’ issuance fee” for the trademark to be registered.

In the letter (which can be viewed here), it is claimed that an $1,800 fee (plus 13% federal taxes) “for the issuance of the registration ID” is required to be paid. Once paid, the letter claims, the “owner/applicant can legally use the R sign/symbol along with the business name”.

The letter uses the USPTO logo three times (including a gold seal) and is signed off from the ‘United States Patent and Trademark Office’. However, the numerous typos (including the ‘Dapartment of Commerce’ in the address section and the agency calling itself “The Patent’s office”) are clear signs that something is amiss – alongside the fact that no such fee exists.

When asked by the filer about this additional fee, a Trademark Centric representative claimed it is a “standardised” fee that is “paid to the government for final registration”. They added that it is “the final fee for completing the registration after which you can use the ‘R’ symbol with your business name”. A payment link was then sent, with the account named as ‘Paytecpro Inc’.

As a reminder, the USPTO database – as confirmed by WTR – shows that the victim’s trademark application has not yet been assigned an examining attorney. WTR reached out to Trademark Centric about the letter, with a consultant, who claimed to be based in Los Angeles, saying they had not heard of such communications being sent. WTR also contacted the USPTO, with a representative confirming the letter is “completely bogus”. It is also understood that any updates on the agency’s fraud fighting could be discussed at today’s public TPAC meeting.

The use of documents purporting to be from the USPTO has been a tactic used by other platforms we have reported on, and the USPTO has been making efforts to combat fraud. In July 2021, evidence emerged that directly linked one mass-fraud operation to a Pakistan-based IT firm named Abtach Ltd, with claims that it forged USPTO documents and certificates. In January 2022, Abtach was banned from practising before the USPTO, with more than 3,000 of its trademark filings cancelled, and its ads account blocked by Google.

More needs to be done

Talking to WTR about this latest development, Ryan Bethell, managing partner of the Ideas Law Firm (which operates ‘Trademarkelite.com’) describes the letter as “brazen impersonation of the USPTO”, adding: “I wish I could say I'm surprised. Obviously, the USPTO's efforts – including the ID verification – haven't stopped the tide of scam artists swindling US customers. I say US customers specifically because of the US attorney requirements for foreign-domiciled applicants. Unless the USPTO can develop a sophisticated algorithm for detecting these sorts of filing entities, it might be time to institute the same US attorney requirement for all applicants.”

At this point, after over a year reporting suspicious activity related to suspicious low-cost filing platforms, Bethell says little has been done. “We, and probably other attorneys, have made complaints to the Attorney General, the Federal Trade Commission, and the Trademark Policy office, but so far none have seemed to get any traction,” he says. “Perhaps the easiest solution would be to apply some political pressure on Google. The only way these scams propagate is through paid ads. We've already reported this activity numerous times to Google, and I doubt that we are the only ones. Google is knowingly profiting from this illegal activity, and requiring something simple – such as a one-time verification of an active Bar membership to advertise on legal services keywords – would immediately solve the issue. If no political pressure can be mustered, then perhaps a class action lawsuit could appropriately align Google's profit motive.”

At present, though, it does appear that nefarious entities are advertising on trademark-related keywords on the Google search engine, at least in the US. For that reason, then, Bethell advises all US business owners to be mindful when they are seeking online trademark services. “Customers need to be more careful,” he states. “I believe most people are probably able to suss out that the forged USPTO letter is a scam. At the rates they are charging, though, it only takes a small percentage of people willing to pay to make this a thriving business.”