Community designs invalidated due to unauthorised use of copyright-protected work

Viejo Valle SA obtained Community design registrations for different articles of crockery (a cup and saucer with grooves and a soup dish with grooves) in 2005: 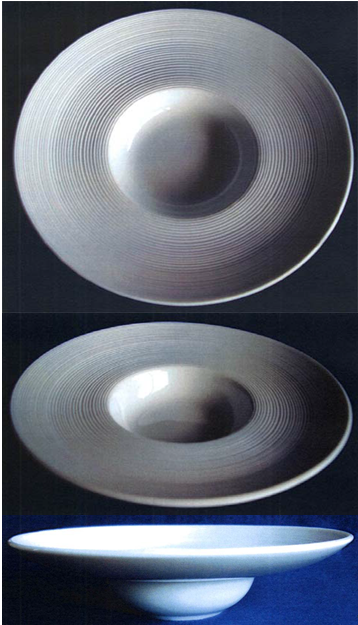 However, in 2008 Établissements Coquet filed applications for a declaration of invalidity of the designs based on Article 25(1)(f) of the Council Regulation on Community Designs (6/2002).

Article 25(1)(f) provides that a Community design may be declared invalid if the design constitutes an unauthorised use of a work protected under the copyright law of a member state. According to Article 28(1)(b)(iii) of the Community Design Implementation Regulation (2245/2002), an application for invalidity based on Article 25(1)(f) must contain the representation and particulars identifying the work protected by copyright, and particulars showing that the applicant is the holder of the copyright. It is for the party claiming invalidation of a design registration based on Article 25(1)(f) to prove that:

Établissements Coquet relied on two items of crockery, namely a cup and saucer and a soup dish, which both belonged to one of its own crockery collections: 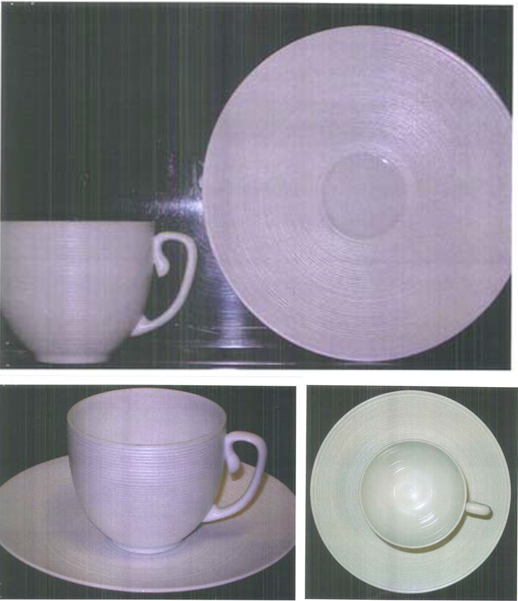 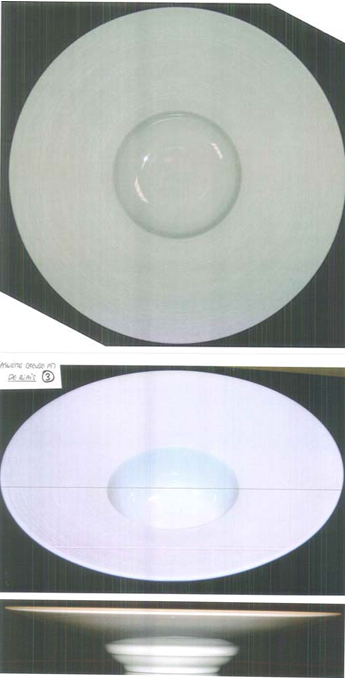 It was the ornamental grooves which appeared on the surface of the articles that were the subject of copyright protection, not the items themselves. Établissements Coquet argued that:

The Invalidity Division found the contested designs invalid under Article 25(1)(f) of Regulation 6/2002.

Importantly, the Board of Appeal rejected Viejo Valle's argument that one had to look at the crockery items as a whole (which revealed considerable differences) and not only at the decorations (grooves), which were shared. When relying on Article 25(1)(f) as a ground for invalidity, one must assess whether the copyright-protected work has been used in the contested design, but it is not necessary to compare the items in their entirety. In this respect, the board noted that the designs used the same pattern and grooves, and that the grooves were placed on the same parts of the crockery items. It was in the sum of these characteristics that the creative content of the earlier work, which was used in the registered designs, was apparent. Consequently, the Board of Appeal dismissed the appeals and maintained the decision to invalidate the design registrations.

Some of the documents contained information showing that other undertakings had decorated crockery by using similar grooves. According to Viejo Valle, this showed that the work relied on by Établissements Coquet was not original and could not qualify for copyright protection under French law.

Such documents were not taken into consideration by the court pursuant to Article 61 of Regulation 6/2002, as they had been produced for the first time before the court. This shows, once again, the importance of ensuring that all relevant evidence is produced before OHIM.

The General Court stated that these judgments were inadmissible in relation to the facts to which they referred and which were not available to the Board of Appeal. However, they were not inadmissible insofar as Viejo Valle alleged that the Board of Appeal had infringed a provision of EU law (ie, Article 25(1)(f) of Regulation 6/2001). Nevertheless, the General Court found that the French judgments (even when they become final) were only applicable between the parties in the national proceedings and in the context of the infringement proceedings between them, and could not lead to the conclusion that copyright did not exist.

Had Viejo Valle been able to produce a national judgment in proceeding brought by itself against Établissements Coquet in which it had been concluded that Établissements Coquet, according to French copyright law, did not hold the rights it relied on, the outcome would have been different. The General Court stated that it was not for the court to take the place of Viejo Valle in managing its case.

The General Court, taking French copyright law into consideration, found that Établissements Coquet had proved that it was the owner of the work on which it relied in its invalidity applications and that such work had been properly identified. Therefore, it dismissed Viejo Valle's first plea alleging that Établissements Coquet had not presented the requisite information concerning the protected work.

As for the second plea, the General Court stated that it was not relevant for the assessment under Article 25(1)(f) to compare the shapes of the different articles of crockery, and that the Board of Appeal had been right to consider only whether or not the decorative grooves, based on the evidence before it, constituted a work protected by French copyright law (and, in the affirmative, whether the grooves were used in the disputed designs). The court thus dismissed Viejo Valle's argument that the assessment of the present matter should have included a "global comparison", "the constraints on the designer’s freedom" and the impression produced on the informed user.

Once it was established that the works were protected by copyright, there could be no doubt that the contested designs constituted "unauthorised use" of the works, as the latter could clearly be seen in the designs. Viejo Valle’s attempt to highlight the greater thickness and more pronounced character of the grooves failed.

The General Court thus dismissed the action and ordered Viejo Valle to pay the costs.

This case highlights once again the importance of producing the right evidence at the right time. It may be that the case could - and should - have had a different outcome. Whether the designs (which are now to be invalidated subject to appeal of the judgment) were rightly registered depends on whether copyright subsist in the works relied on by Établissements Coquet.