The Cologne Appeal Court - Germany’s first-choice venue for enforcing claims based on misappropriation and trademark rights due to its owner-friendly approach - has issued its decision in a case brought by Mars Inc against Turkish chocolate maker Şölen AŞ concerning Mars’ Snickers and Bounty chocolate bars (Case 6 U 85/13, December 20 2013). While the court dismissed Mars’ claims that the defendant had copied the Bounty packaging and infringed its 3D mark for the Bounty chocolate bar, it granted Mars’ claim that the defendant had imitated the Snickers packaging.

Mars has been selling Snickers confectionery in Germany since the beginning of the 1980s. Turnover in Germany amounted to €95 million in 2010 and €100 million in 2011, advertising spend was in the range of €5 million in 2011, while the market share in Germany was 7.9% in 2010 and 8.6% in 2011. On this basis, the court considered that the outer appearance of the Snickers packaging was entitled to claim “enormous reputation” and a “significantly increased competitive individuality”.

Turning to the defendant’s packaging, the Cologne Appeal Court found that it was “evidently” based on the Snickers design, copying features of appearance characterising the latter’s overall impression. In both cases, the product name was written in capital letters tilted to the right, using blue and/or lilac colours (which, in the consumer’s imperfect recollection, were hardly distinguishable); the individual letters were surrounding by a white-and-red border and “brown segments were clearly perceived” in the black/brown background of the packaging.

Consequently, German consumers would be misled, perceiving the trade dress of the defendant’s product as a sub-brand or variant of the Snickers product. The indication ‘Şölen’ in small lettering would not suffice, as this company was not known in Germany; nor could ‘Şölen’ be identified as the manufacturer. In addition, indications of different manufacturers would not avoid an indirect deception as to origin if the conflicting packs gave a “clearly similar overall effect”. The court further held that, according the judges’ practical expertise, the relevant public did not know that Mars did not grant licences for its products. As a result, the court granted relief for misappropriation under Section 4, No 9, lit (a) of the Act against Unfair Competition based on an avoidable indirect deception as to origin.

In addition, the court also granted Mars’ claims under Section 4, No 9, lit (b) of the Act against Unfair Competition, on the grounds that the defendant’s packaging took unfair advantage, without due cause, of the repute of the Snickers product, as consumers would transfer quality expectations from the original to the defendant’s product.

As regards the Bounty chocolate bar, the dispute concerned, first of all, the two packs depicted below:

Again, Mars asserted claims under Section 4, No 9 of the Act against Unfair Competition for misappropriation based on an avoidable indirect deception as to origin and/or exploitation of reputation. This time, however, the Cologne Appeal Court denied such claims - even though the court again confirmed that the outer appearance of the Bounty product could claim an “enormous reputation” and a “significantly increased competitive individuality”, due to turnover in Germany of €22 million per year in 2010 and 2011, advertising spend in the range of €5 million in 2011, and a market share of 2.6% in 2010 and 2011.

Furthermore, due to the evidently different product names (Wish/Bounty), there was no likelihood of confusion (neither in terms of an avoidable direct deception nor in terms of an indirect deception as to origin). The Cologne Appeal Court also denied the claim that the defendant took unfair advantage, without due cause, of the repute of the Bounty product or that the Wish packaging was detrimental to the repute of the Bounty product.

Finally, the court was called upon to decide whether Mars could successfully claim infringement of its German 3D mark (No 302010033190) registered, among other things, for “non-medical confectionary”. The mark and the defendant’s chocolate bar are shown below: 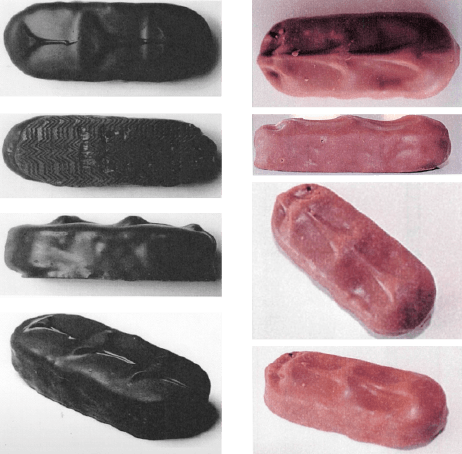 The mark had originally been registered as a Community trademark, but had later been invalidated due to a lack of acquired distinctive character in the European Union. On October 11 2011 the German Patent and Trademark Office allowed the registration of the mark based on acquired distinctiveness in Germany (invalidity proceedings are still pending). A consumer survey dated October/November 2004 showed that 49.4% of the interviewees attributed the mark either to Bounty, its manufacturer or other of its products.

Nonetheless, the Cologne Appeal Court found that the mark had not been infringed. The conflicting signs were highly similar; however, the defendant’s product configuration was not used “as a mark” in order to indicate the origin of the product, according to the court. Mars had failed to demonstrate that the public perceived the shape of a chocolate bar as a badge of origin. The variety of product configurations which could be found on the German chocolate market did not serve to distinguish the different products; rather, consumers would perceive differences in the dimensions and textures of existing chocolate bars as being merely functional or ornamental. The court further held that the mark’s distinctiveness was average at best and did not significantly exceed the 50% threshold which would be required, according to German case law, to recognise that it had acquired distinctiveness.

The court’s decision seems to be consistent with established case law of the German Federal Supreme Court and, in particular, the decision in Praline Shape I. However, there appear to be inconsistencies with the case law of other German appellate courts.

For instance, and contrary to the Cologne Appeal Court in the present case, the Hamburg Appeal Court found in October 2008 that the requirement of “use as a mark” should, as a rule, be construed broadly in the interests of comprehensive trademark protection. Accordingly, it would suffice that there is the “objectively, not entirely unlikely, possibility that the public will assume an indication as to commercial origin”. “Use as a mark” should be denied only if the sign was “clearly not perceived as an indication of commercial origin”.

Likewise, there seems to be a discrepancy between the decision in the present case and a decision of the Hamburg Appeal Court from April 2005 according to which it is unlikely that consumers will expect brand owners to allow ‘me-too’ products to be put on the market in a packaging capable of causing confusion, even if the public might assume that major food discounters distribute products of known brand owners under their own private label.

Finally, according to the Dusseldorf Appeal Court, the standard under Section 4, No 9, lit (b) of the Act against Unfair Competition would be that third-party observers passing by and seeing someone using the imitation would perceive this product as being the original. The high similarity from the perspective of such a third party constituted a clear incentive for potential buyers in order to impress third parties, according to the court. Consequently, it was not the perspective and perception of a (potential) buyer of the competing products (this is what the Cologne Appeal Court found) that should count, but those of a “casual bystander”.

The present case is pending before the Federal Supreme Court. More clarity will hopefully be provided.