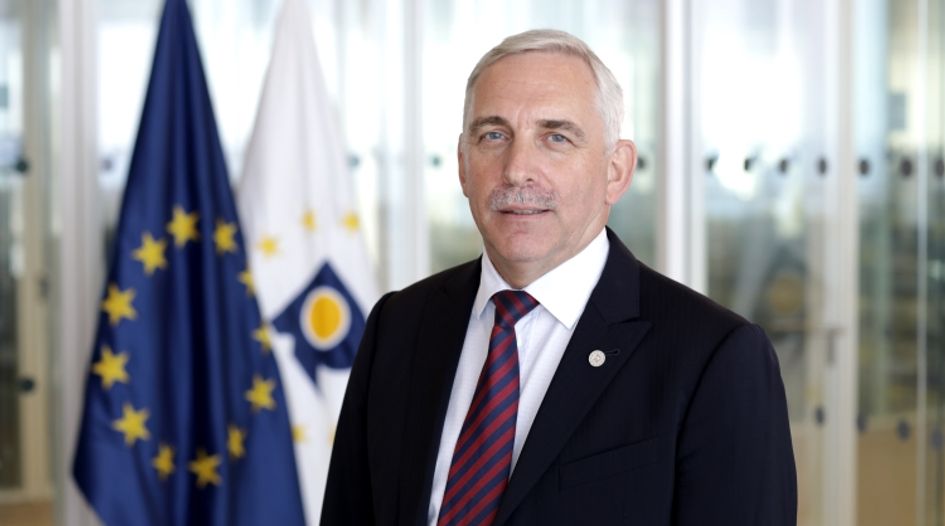 The European Union Intellectual Property Office (EUIPO) has confirmed that Christian Archambeau will take the reins permanently as executive director. His appointment comes at a time of turbulence at the EUIPO, with the UK set to leave the European Union next March and question marks still hanging over what that could mean for EU trademark holders.

Archambeau has been acting executive director of the office since July 1. Prior to that, he worked as the EUIPO’s deputy executive director under former director António Campinos, who joined the European Patent Office (EPO) as president back in July. He originally joined the EUIPO in 2010, and before that he worked in roles including principal director at the EPO and in various management positions at the European Space Agency. He has been the favourite to take over the role since Campinos departed, and on 13 July he was recommended by the Committee of Permanent Representatives of the European Union (COREPER) to fill the vacancy. The European Council subsequently confirmed his appointment in mid-September.

During his tenure as deputy executive director, he has been responsible for some major operations at the office. He held direct oversight of a number of areas, including the finance department, the infrastructure department, the IT department, the EUIPO Academy, and the EUIPO’s quality, performance and risk activities. One major project he oversaw was the introduction of the office’s activity-based budgeting and management, which led to process simplifications that – as the EUIPO describes – “helped contribute to substantial annual cost efficiency gains”. For example, that project enabled the EUIPO to cope with significant growth in workload from EU trademark and design registrations while also taking on increased international cooperation activities.

Thankfully for Archambeau, he takes over during a time of positive indicators for the office. In the current issue of WTR, we published our annual deep-dive into the activities and operations at the EUIPO, and it revealed an office in relatively good shape. In terms of KPIs, from 2010 to 2017, more than 956,000 EU trademark applications were filed at the EUIPO, with an average annual growth rate of 5.9% and overall growth of almost 49%. As of 1 January 2018, there were more than 1.2 million EU trademark registrations containing nearly 3.4 million associated goods and services classes. Significantly, while the workloads of those based in Alicante is inevitably growing, efficiency gains across the period have led to reductions in the timeliness of key activities.

As well as positive indicators on key metrics (like filing rate and efficiency), the EUIPO also leads the world in terms of non-core trademark services. Back in February, the office was revealed as the world’s most innovative IP office for the second year in a row, and was lauded for being “the standard bearer across all digital, value-add and public outreach metrics” in WTR’s annual ranking of IP office innovators.

Looking ahead, though, Archambeau has arguably one of the most significant challenges that any EUIPO executive director could face ahead of him – Brexit and its possible trademark implications. Of course, it is expected that most of the upheaval will be seen at the UK Intellectual Property Office (UKIPO), but Archambeau will still have to navigate the EUIPO through the inevitable consequences of Brexit in the coming months and years. For example, if EUTM rights no longer cover the UK in there future, there will be significant communication issues the office will need to overcome. Furthermore, if UK representatives will be unable to to practice at the EUIPO, the office will need to address the practicalities of that change (such as what it could mean for pending issues and if users will need to change representatives).

For now, though, Archambeau will continue to steer the ship that he’s been captain of since July – but now with the knowledge that he’s there on a permanent basis. Users will no doubt hope there are calm seas ahead.