The court affirmed trademark infringement and unfair competition, ordered the cessation of the infringement, and awarded damages of Rmb3 million and the reimbursement of legal costs in the amount of Rmb550,000.

Xinbailun Inc, a company established in Jinjiang, Fujian Province, offered sneakers bearing the letter ‘N’ on both sides of the shoes. Moreover, Xinbailun Inc registered 新佰伦 (‘Xinbailun’) as its trade name; the pronunciation was identical to that of New Balance China’s trade name and the Chinese characters were almost identical. Further, Xinbailun Inc uses ‘Niubanlunsi’, which mimics the English pronunciation of ‘New Balance’, as its brand name. To give the copycat business a legitimate cover, the controller of Xinbailun Inc registered a variety of N trademarks in Class 25, assigned these registrations to a Hong Kong shell company, and had the shell company grant a licence to Xinbailun Inc to use these trademarks.

Findings of the court

New Balance China submitted evidence - through multiple angles including sales volumes, advertising and judicial precedents - that its N trademark (depicted below) had achieved high public awareness and formed a unique association with New Balance sneakers through long-standing promotion and use in China: 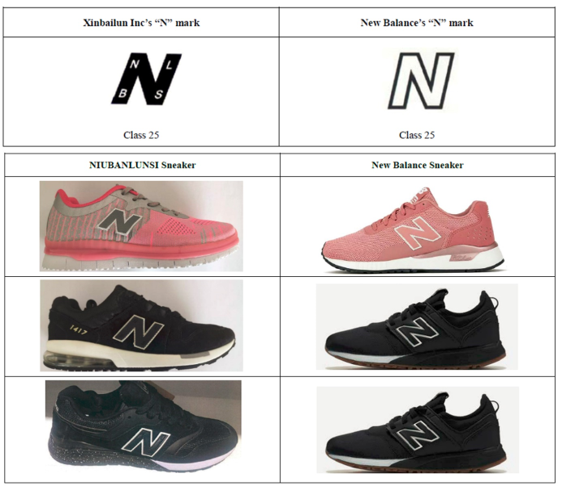 In light of the above, the Nanjing Intermediate Court held that Xinbailun Inc had altered the distinctive features of its N trademark in actual use in order to free-ride on the reputation of New Balance China’s N trademark, which undermined the legitimate interests of the plaintiff and harmed consumer rights. Thus, there was trademark infringement.

New Balance China submitted abundant evidence to prove that its Chinese trade name 新百伦 had achieved high consumer awareness and distinctiveness so that it functioned as a source identifier for its sneakers. Xinbailun Inc, as a rival shoemaker, should have been fully aware of the plaintiff’s 新百伦 trade name; yet, it deliberately registered and used the trade name 新佰伦 (which had an identical pronunciation and highly similar Chinese characters) in its business operations, thus exhibiting an intention to mislead the public. The market survey also corroborated the argument that the public was misled into believing that Xinbailun Inc was somehow associated or affiliated with the plaintiff.

Based on the above findings, the court determined that the plaintiff’s trade name 新百伦 had gained a certain influence and had become associated with the N trademark and the New Balance sneakers. Use of a similar trade name by the defendant took unfair advantage of, and was detrimental to, the reputation of the plaintiff. Therefore, the defendant’s actions constituted unfair competition and the latter should change its business name, ensuring that the new name did not include ‘新佰伦’.

Rmb3 million is the upper limit for statutory damages

With regard to compensation, the court took into account the popularity of the N trademark, the bad faith of Xinbailun Inc due to repeated infringement, the consequences of the infringement and the profit margin of similar products, and set the amount of damages at Rmb3 million - the upper limit for statutory damages, as stipulated in China’s Trademark Law.

This case demonstrates the willingness of the Nanjing Intermediate Court to provide efficient judicial remedies to IP owners by penalising infringers and holding them accountable.