Recent amendments to China’s Anti-unfair Competition Law have seen legal compensation rise from Rmb3 million to Rmb5 million, which goes some way to addressing the significant cost of stopping infringement.

Advertising is the most important means of promoting a business. According to one official report, the scale of the advertising industry in China has been continuously expanding and is now growing even more thanks to improvements in multimedia and internet techniques. For the past two years, China’s advertising industry has ranked second in the world.

China is a member of the World Trade Organisation; as a signatory to various international regulations (ie, the Paris Convention for the Protection of Industrial Property and the Agreement on Trade-Related Aspects of Intellectual Property Rights), it also has domestic legislation in place to protect the legitimate rights and interests of business operators and consumers, and to tackle different forms of unfair competition.

The Paris Convention states that ‘unfair competition’ practices include:

In line with the Paris Convention, Chinese law prevents activities that may result in consumer confusion or be misleading as to the quality, origin or characteristics of the goods.

The Advertising Law provides the following:

At present, China’s IP system focuses mainly on the protection of traditional intellectual property. In addition to traditional IP law (eg, patent, trademark and copyright law), the Anti-unfair Competition Law also provides a kind of complementary protection to intellectual property in a broad sense. For example, while the Trademark Law focuses on the protection of a rights holder’s exclusive right to use a registered trademark, Article 6 of the Anti-unfair Competition Law can be used to combat the infringement of other signs not protected by the Trademark Law.

Advertising in terms of unfair competition in China can be identified as:

Misleading advertising refers to advertising activities that cause confusion by making consumers believe that a product or service belongs to another party or has a particular connection with another party. 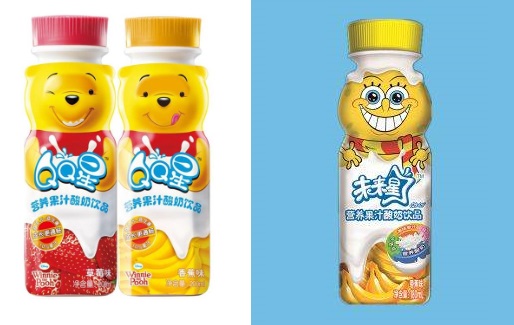 Both parties have registered trademarks used on their yoghurt and milk products. Comparing the product packaging of the two items, both share the term ‘nutritious juice yoghurt drink’ in Chinese characters, the position of each term is similar and the design and background colour is basically the same. The Beijing IP Court decided that Mengniu’s activity constituted unfair competition (according to Article 6 of the Anti-unfair Competition Law), reasoning that although there are some differences between the terms ‘QQ’ and ‘Future’, the images of the cartoon characters and fruit pictures demonstrate that Mengniu was imitating the packaging and decoration of Yili’s products, leading to consumer confusion.

Yestar, a Chinese medical cosmetology hospital, was ordered to stop its false advertising and unfair competition activities after the Korean company Medipartnerco Ltd instigated court proceedings on the basis of Article 8 of the Anti-unfair Competition Law. On its website and in other promotional documents, Yestar falsely published information about:

All such information was deemed to be misleading to consumers. In addition, Yestar used Medipartnerco’s company introductions, photos, honours and other information falsely on its website and other publications, to build up its own competitive advantage inappropriately, causing confusion among consumers regarding Yestar’s relationship with Medipartnerco and affecting consumer decision making.

Comparative advertising is permitted in China, except for medicines and medical apparatuses. However, comparative advertising containing false or misleading information or information that denigrates a competitor’s goods or services is not allowed. For example, Company A must not post an advertisement which compares its products with its competitor’s (Company B) products, while highlighting the advantages of A’s products and the disadvantages of B’s products. Such advertising activity may be considered as “denigrating the commodities or services of other producers or operators” and thus violating Article 12 of the Advertising Law.

The Anti-unfair Competition Law was amended in April 2019. With the rapid development of the advertising industry and a surge in the number of infringement cases in China, demand to increase efforts to crack down on malicious infringement action and increase legal compensation has been high. Under the new Anti-unfair Competition Law, legal compensation has risen from Rmb3 million to Rmb5 million, consistent with the newly revised Trademark Law. To some extent, this will solve the problem of the significant cost of stopping infringement action and previously low compensation. More rules and regulations are expected to be issued in order to improve and complete the legal framework in this field.

According to the relevant regulations, when an entity’s advertising activities directly or indirectly affect another’s business or image, it is possible to file a complaint with the local Administration for Industry and Commerce, which will investigate the case and decide on the complaint. If the local administration office holds the activity to be illegal, it will order the advertisement to be stopped immediately and issue fines to the parties involved. In addition, it can initiate unfair competition litigation to stop the advertisement and claim damages if rights are harmed by acts of unfair competition.

According to Article 17 of the Anti-unfair Competition Law, where an operator, in contravention of the law, causes damage, it must bear the responsibility for compensating that damage. Where the losses suffered by the injured operator are difficult to calculate, the amount of damages will be the profits gained by the infringer during the period of infringement through the infringing act. The infringer must also bear all reasonable costs paid by the injured operator to stop the tort.