In Research and Production Company “Melt Water” UAB v Office for Harmonisation in the Internal Market (OHIM) (Case T-70/14, January 14 2015), the General Court has dismissed the applicant’s appeal and confirmed a decision of the Fifth Board of Appeal of OHIM finding that the three-dimensional (3D) mark depicted below was devoid of distinctive character for goods in Class 32 of the Nice Classification. 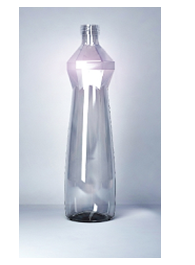 In its decision, the General Court reiterated the now established standards for the registration of 3D marks consisting of the shape of the packaging - namely:

In its appeal, the applicant asserted that the Board of Appeal had not examined the characteristics of the mark that rendered it unique - namely:

The court also rejected the applicant’s argument that the board's decision was discriminatory in light of the registration of prior 3D marks and, therefore, did not comply with the principles of proportionality, equity and justice. The court considered that the application of these principles must be reconciled with the principle of legality. Therefore, the applicant could not rely on unlawful acts committed in favour of another in order to obtain an identical decision.

This decision is another reminder that the registration of 3D signs as Community trademarks, particularly in cases where the shape consists of the product packaging, remains very challenging.