On May 9 2012 the Borgarting Court of Appeal issued its decision in the dispute between Kraft Foods Norge AS and Kraft Foods Norge Intellectual Property AS (collectively Kraft Foods) on the one hand, and Juritzen Forlag AS on the other. The case concerned the alleged infringement of the trademarks protecting the well-known Norwegian chocolate bar Kvikk Lunsj (Quick Lunch).

The Kvikk Lunsj product is protected by four registrations, including:

The dispute, which has sparked interest within the trademark community in Norway, arose following Juritzen Forlag’s launch of a crime novel with the following cover:

The issue in this case was whether the above-mentioned registrations protected Kraft Foods against the use of signs similar to its trademarks on the book jacket - that is, whether the trademarks, which have been marketed extensively for over 70 years, had achieved the so-called KODAK protection (protection beyond the goods/services covered by the registration).

In addition, Juritzen Forlag had registered the following two trademarks with the Norwegian Trademark Register, and Kraft Foods had initiated cancellation proceedings: 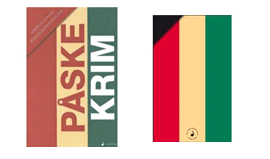 Based on the extensive evidence provided by Kraft Foods, the Borgarting Court of Appeal found that the elements of the Kvikk Lunsj packaging, including the colour combination, were sufficiently well known. In fact, 77% of consumers recognised the combination of the colours red, yellow and green, and associated it with the Kvikk Lunsj chocolate bar and the trademark owner.

With this decision, Kraft Foods’ colour combination trademark was thus afforded protection beyond the goods for which the mark is registered (ie, KODAK protection).

In light of the foregoing, as well as the fact that Juritzen Forlag used the same font on the book jacket and that the letters were placed in the exact same manner as in Kraft Foods’ mark, the court held that consumers were likely to believe that the book was associated with the Kvikk Lunsj product. This conclusion was not affected by the fact that the novel and/or overall design of the book did not give indications to chocolate.

Moreover, taking into consideration that Kvikk Lunsj is mainly advertised as the ‘outdoor chocolate’, and often in connection with Easter, the title of the novel - “Påskekrim” (‘Easter crime novel’) - only enhanced the likelihood of association. Therefore, Juritzen Forlag unreasonably exploited the goodwill of Kraft Foods’ trademarks.

The court thus found that the book jacket was in breach of the Trademarks Act and that Juritzen Forlag’s trademarks were invalid.

Reviewing the decision, one might wonder whether Juritzen Forlag’s use of the design in question on its book jacket constituted trademark use and actually fell within the scope of the Trademarks Act. In accordance with Norwegian law, unfair use is covered by the Marketing Act and the unfair competition legislation. Arguably, this distinction is highly important and should have been addressed by the Court of Appeal.

After Kraft Foods gave notice of the infringement to Juritzen Forlag, but prior to the oral hearing before the district court, Juritzen Forlag redesigned the book jacket and filed a trademark application for the same:

Kraft Foods again claimed that the mark was invalid and infringed its registered trademarks.

The Oslo District Court also found that the new design was infringing. The Court of Appeal, however, had a different view.

The Court of Appeal emphasised that the only similarity between the signs was the use of the colour combination. Both the font and the title were sufficiently different and did not create a direct association to the KVIKK LUNSJ mark. The court also stated that the new design could not be considered as a continuation of the earlier designs.

Arguably, the question that remains is whether Juritzen Forlag had an obligation to better distinguish the new design - which is, in fact, derived from the earlier designs and, therefore, the KVIKK LUNSJ marks - from the ones that had been found to infringe Kraft Foods’ exclusive rights.