Board of Appeal erred in not examining acquired distinctiveness claim

In Dosenbach-Ochsner AG Schuhe und Sport v Office for Harmonisation in the Internal Market (OHIM) (Case T-424/10, February 7 2012), the General Court has annulled a decision of the Fourth Board of Appeal of OHIM in the context of an action for a declaration of invalidity.

Sisma SpA is the owner of a Community figurative mark consisting of a rectangle containing several elephants, registered for goods in Classes 24 and 25 of the Nice Classification: 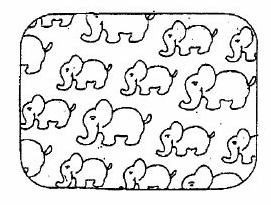 Dosenbach-Ochsner AG Schuhe und Sport filed a request for invalidity of the mark on relative grounds on the basis of its earlier international and national figurative marks representing an elephant (depicted below) and the national word mark ELEFANTEN for goods in Classes 24 and 25.

In its decision of September 9 2008, the Cancellation Division of OHIM dismissed the application for a declaration of invalidity, holding that there was no likelihood of confusion between the contested mark and the earlier marks.

Dosenbach appealed. On July 15 2010 the Fourth Board of Appeal of OHIM dismissed the appeal, holding that:

The board also pointed out that Dosenbach had not claimed that the earlier marks had acquired enhanced distinctiveness through use.

Dosenbach requested that the General Court annul the decision of the Board of Appeal, challenging:

The General Court stated that the board's decision was vitiated by errors in the assessment of the phonetic and conceptual similarity.

From a visual point of view, the court found that, even though both signs contained stylised representations of the profile of an elephant, those representations were significantly different. In fact, as affirmed by the Board of Appeal, the contested mark was composed of white elephants with a black outline, whereas the earlier figurative marks consisted of a black elephant with a white outline. Therefore, the board had not erred in concluding that the marks were visually different. From a phonetic point of view, contrary to OHIM's opinion, since the contested mark was a figurative mark without any word elements, it could not be concluded that there was either a phonetic similarity or a phonetic dissimilarity between the signs. Conceptually, both marks referred to the concept of ‘elephant’. The fact that the contested mark included a series of elephants of different sizes was irrelevant to the public's perception. Therefore, Dosenbach was correct in affirming that the marks were conceptually identical.

In addition, the General Court held that the board had erred in stating that Dosenbach had not expressly claimed, before the Cancellation Division, that its earlier marks had acquired distinctiveness through use, but had only filed evidence to prove the genuine use of the marks. Dosenbach, in its submissions, had stated that "because of their intensive and lengthy use shown previously on the German market, [the marks] have above-average distinctive character". According to the General Court, this was sufficient to prove that Dosenbach had expressly relied on the enhanced distinctiveness of its marks acquired through their earlier use. Therefore, the Cancellation Division and the Board of Appeal were required to consider the merits of the claim of acquired distinctiveness, as it could be a potentially relevant factor in the global assessment of the likelihood of confusion between the signs.

On the basis of the above, the General Court concluded that it did not have all the elements necessary to determine the soundness of the global assessment as to whether there was a likelihood of confusion. The contested decision was thus annulled.