BMW: another victorious ride in the battle to protect its marks

After winning a landmark IP case against Century Baoma in 2009 at the Hunan Supreme People’s Court, in December 2011 renowned German car manufacturer BMW launched and won yet another attack at the Beijing Number 2 Intermediate People's Court against a Chinese company which appears to be related to Century Baoma.

In the 2009 case, Century Baoma’s use of the marks MBWL (and device) and MBWL in relation to Class 25 goods and its use of a trade name incorporating 宝马 ('Baoma' being the transliteration of 宝马) was ruled to amount to trademark infringement and unfair competition. The court ordered, among other things, that Century Baoma stop the infringement and act of unfair competition, and awarded damages in the amount of Rmb500,000 to BMW.

Despite the victory, the infringement and unfair competition did not stop. In the 2011 case, BMW had to battle against another PRC company, Century Baochi, which seems to be related to Century Baoma. In this case, BMW sued Century Baochi for trademark infringement for using in relation to Class 25 goods:

Century Baochi tried to rely on the Chinese registration for the following mark (Registration 4719183) in Class 25: 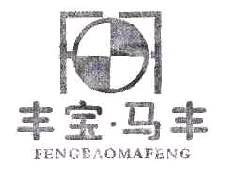 The mark is registered in the name of a Hong Kong company called Germany Century BMW Group Share Limited, and Century Baochi alleged that it had been authorised to use the mark and the trade name.

After hearing the case, the Beijing People’s Court found that:

Century Baochi was ordered to stop the acts of infringement and unfair competition and pay damages of Rmb500,000 to BMW.

However, the Beijing People’s Court did not allow BMW’s claim against the mark 丰宝•马丰.  BMW was required to initiate administrative proceedings in order to take action against a registered mark based on its own prior registered mark. Both BMW and Century Baochi have appealed to the Beijing Municipal Higher People's Court.

The 2009 case has been named one of the top 10 judicial cases in 2009 by the Chinese People’s court. In that case, the court recognised that BMW’s Chinese registered marks in Class 12 were well-known marks and, therefore, were also protected in respect of Class 25 goods. This case is considered to be a judicial precedent for famous foreign companies when applying for the recognition of their marks as well known in judicial cases. However, despite the importance of the 2009 case, it is evident that it did not deter infringers (not even the 'same' infringers).

Century Baoma’s or Century Baochi’s persistence in continuing the alleged acts of trademark infringement and unfair competition shows that the battle to protect IP rights is long and hard. Trademark owners, especially those whose marks are famous, must be prepared to stand fast and be vigilant in protecting their marks in China. Trademark owners must also be prepared for infringers who are ready to fight, who will try to legitimise their acts by registering a lookalike mark that will somehow escape the Chinese Trademarks Office’s trademark examination rules, and who will make use of Hong Kong-registered companies in their activities.

Now that both BMW and Century Baochi have filed an appeal, it will be interesting to see whether BMW can keep winning and whether the appeal will become another landmark case in trademark protection.