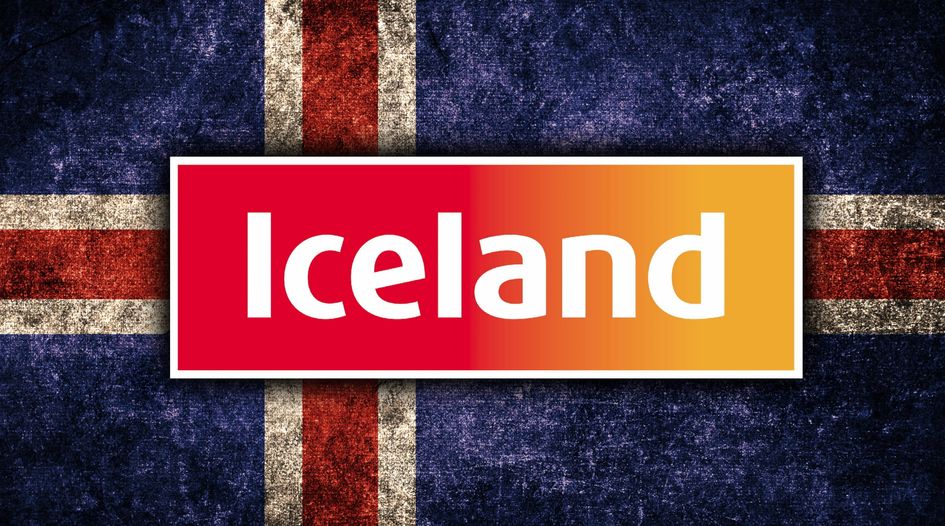 UK retailer Iceland Foods has lost an appeal to prevent the cancellation of its EU trademark registrations for ICELAND. The ruling, described as “slightly surprising” by one expert, means that corporations will have to proceed “with caution” in any future attempt to register a country name as an EU trademark.

The dispute between supermarket chain Iceland Foods and the EU country of Iceland first arose in 2016, when the country claimed that the supermarket’s ICELAND mark was likely to deceive the general public with regard to the geographical origin of the goods and services on offer in its stores. The supermarket’s use of the name intended to “hinder Icelandic entities in trade, and attempt to stop them from referring to their geographical origin, and their home country in relation to their trademarks”, the country argued at the time.

In 2019, the EUIPO Cancellation Division declared the ICELAND mark invalid in its entirety (ie, for all disputed goods and services). But the supermarket chain appealed, arguing that ICELAND had acquired distinctiveness through almost 50 years of use, and in September 2022 oral arguments began before the EUIPO Grand Board of Appeal.

The supermarket chain filed a number of arguments relating to case law on geographical names, arguing that it was unlikely that consumers would misunderstand the ICELAND mark as referring to the origin of the goods and services, and claiming that it had acquired distinctiveness through almost five decades’ worth of use.

This week, the Grand Board of Appeal issued its ruling – and it was good news for the country of Iceland. The board upheld the earlier cancellation decisions against both the EU registered word and stylised ICELAND marks.

A key tenet of the board’s position was that it rejected Iceland Food’s arguments that earlier trademark registrations such as ALASKA defended the registration of geographical names. “Iceland is a sovereign state whereas Alaska is a region of the United States… [and] over three-and-half times further away from mainland Europe”, the board pointed out. Iceland is also “a member of [the] EEA and therefore economic trade links with the EU are far greater than with Alaska”, the board added. Instead, it pointed to the fact that applications for ANDORRA and SUEDTIROL had been refused registration and that the ICELAND mark was more akin to those instances.

Talking to WTR, HGF partner and chartered trademark attorney Lee Curtis says that he was “slightly surprised by the decision”, expanding: “Only slightly, as in my opinion it was very finely balanced. However, my opinion may be coloured as a Brit for being very aware of Iceland Foods and its use of ICELAND as a brand in the United Kingdom. The board claims that it has stuck to the existing case law, and has not made the registration of country names special cases. However, in essence, I think that is maybe what it has done. Its ‘get out’ is the argument that Iceland has strong economic and historical links to the European Union, especially Denmark, and is a member of the European Economic Area. Will the names of countries more distant from the European Union be treated the same way? We will have to wait and see.”

Crucially, the board did not completely rule out the idea that country names cannot function as trademarks.

“Even if a country name may on occasion function as a trade mark (and indeed there are multiple examples of various country names registered as trade marks), the matter has to be approached with caution,” the board stated, continuing:

“While the presumed expectations in relation to that sign of the target consumer have to be evaluated, geographical marks that include the name of a country may by their very nature be perceived differently from other geographical indications, such as names of regions, lakes and mountains. Average consumers are more in the habit of making assumptions about the origin of products on the basis of their national provenance than in relation to other types of geographical signs. This is especially the case of the names of the countries of the European Union or European Economic Area, with which the relevant EU public is more familiar and which are in closer geographic proximity to them and are therefore more likely to be perceived as embodying certain favourable characteristics that influence acquisition of goods or services. Conversely, country names that originate from further afield and with which that public is less familiar may therefore be less problematic.”

The board went on to state that: “The monopolisation of a country name cannot lead to the inequitable situation in which traders with real and genuine connection to a certain geographic location are forced to constantly ‘look over their shoulder’ when referring to the real geographical origin of goods and service or, as a case may be, when using it as part of their trade mark.”

“The board said that traders should not have to ‘look over their shoulder’ when using geographic terms and essentially worry they might be sued,” Curtis reflects. “The board held this despite Iceland Foods’ statements at the oral hearing on the case that they were not in the business of threatening Icelandic-based businesses using the term ‘Iceland.’”

The board also rejected the supermarket chain’s evidence of acquired distinctiveness on the grounds that no evidence was filed for Denmark, Finland, the Netherlands or Sweden. Instead, it found sufficient evidence of the close bonds that Iceland the country has with the European Union, particularly Denmark, its economic prosperity, industrial capacity and importance, its high standing as a ‘nation brand’ and the positive connotations that the EU public associates with the country as a world-class tourist destination. All of this “makes it reasonably foreseeable that the target public will assume that all the goods and service at stake may originate from Iceland”, the board said.

The bitter dispute between the two sides has gained significant media attention over the years. And various organisations have weighed in on the matter. In July 2021, INTA filed an amicus brief highlighting its concern that the EUIPO Cancellation Division’s approach might de facto lead to the undesirable conclusion that country names or other geographical terms are inherently descriptive/non-distinctive in connection with all, or a substantial number, of goods and services

Meanwhile, in October 2021, the Swissness Enforcement Association filed an amicus curiae brief urging that country names be barred from trademark registration in the European Union without restriction or consent. A decision in favour of the supermarket chain “would mean that Icelandic companies could possibly not use the word Iceland in their trademarks to designate the products they’re selling”, Margrét Hjálmarsdóttir, an attorney at the Icelandic Intellectual Property Office, added in September 2022.

Thus, while some will be celebrating the Grand Board of Appeal’s decision, Iceland Foods will not be alone in lamenting the potential repurcussions. Brand owners will have to tread carefully when it comes to using country names and other geographical terms in future. However, the uniqueness of the Iceland case, which could only be determined on a highly specific basis, means that the road forward is not completely closed.