PT Multicom Persada International owns a registration for the trademark IBOX for various electronic products in Class 9 of the Nice Classification.

PT Daya Citra Mandiri is an authorised reseller of Apple products and uses the name iBox at more than 20 outlets in Jakarta and major cities in Indonesia, many in top shopping malls (see picture below). 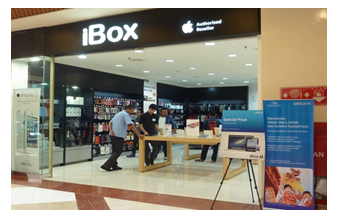 The Jakarta Commercial Court held in early February that the two marks differed. First, the court found that the marks were not similar due to the different placement of the letter ‘i’: ‘iBox’ is composed of a small ‘i’ next to letters that form the word ‘box’, all written horizontally, while the plaintiff's IBOX mark consisted of a logo with the letter ‘I’ placed vertically and above the letters ‘BOX’.

More importantly, the court found that the defendant's services in Class 35 were not the same as the goods covered by the registration of the plaintiff in Class 9.

Any trademark expert would ask a lot of questions of this decision; but perhaps there is justice in the somewhat weak arguments used by the court, in light of the general comments it made about how the defendant was not free riding on the plaintiff's mark, and did not disturb the plaintiff's trade. Arguably, the case smells of Multicom looking to get leverage over Apple's powerful distribution agent.

Multicom stated that it would appeal.