Accession to the Madrid Protocol - is the Trademark Office ready?

In theory, both Indian and foreign trademark owners will benefit when the Madrid Protocol takes effect in India on July 8 2013 (for further details please see "Accession to Madrid Protocol announced"). There are continuing concerns, however, as to whether they will benefit in practice. Despite recent assurances of the Controller General of Trademarks, practitioners are concerned that the Trademark Office will not be able to comply with the strict timelines required by the protocol and, at the same time, deal with the current - and ever-increasing - backlog of applications.

The delays currently occurring at the Trademark Registry are legendary. Although applications filed in recent years (ie, within the past three to five years) are being examined quickly, they are likely to remain pending for years if objections are raised by the examiner. Many old applications are also still pending. The data below, taken from the Controller General’s recent presentation, demonstrates the problem: 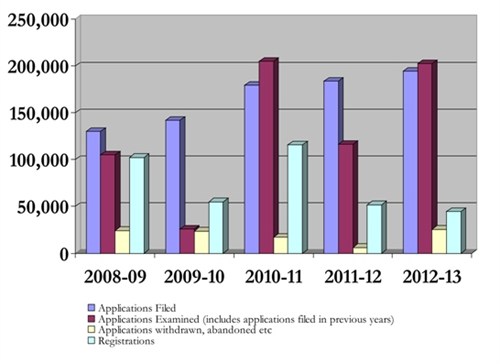 Practitioners are concerned that diversion of the Trademark Office’s already very limited resources to Madrid Protocol compliance will lead to further increases in the current backlog. The Trademark Office is currently functioning with staff levels 50% lower than those approved. On average, cancellation actions and contested oppositions are taking up to six years to be decided and, in several instances, the initial ‘notice’ was not served for more than three years. The Trademark Registry has, from time to time, initiated a number of special projects to clear the backlog (see, for example, "Trademarks Office initiates special project to clear backlog"), but each has resulted in no more than a short-term fix.

While there is no denying that, in principle, accession to the Madrid Protocol will benefit both Indian and foreign trademark owners, the Ministry of Commerce and Industry’s decision to implement the protocol at this stage is arguably premature. What is needed is a proper implementation plan, worked out in consultation with stakeholders, to ensure that the Trademark Office is able to provide a timely, accurate and efficient service.