The Absolut Company is the owner of the trademarks 绝对 ('absolute' in Chinese) and ABSOLUT, as well as the 2D trademarks depicted below:

The Absolut Company became aware of a product on the market named Success Vodka (depicted below), which not only used the mark SUCCESS VODKA, as well as a blue font and decorative elements that were very similar to those of The Absolut Company, but also used the same bottle shape as that of the Absolut Vodka product. 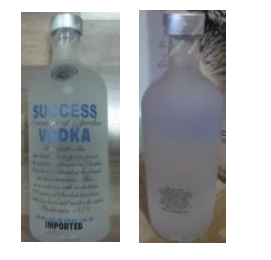 On April 15 2013 The Absolut Company filed a lawsuit against the manufacturer and distributor of Success Vodka before the Changsha Intermediate Court on the grounds of trademark infringement and unfair competition. The court noted that there were multiple similarities between the allegedly infringing product and The Absolut Company’s registered trademark but, more importantly, it considered that the 2D trademark of The Absolut Company was infringed by the 3D product. The court ruled that, in view of the similarities between the products' graphic elements and shape, and in view of the reputation and distinctiveness of the genuine product of the plaintiff, it was likely that the relevant public would assume that the allegedly infringing product was somehow associated with the plaintiff, which constituted confusingly similarity according to the Trademark Law.

On May 26 2014 the court upheld the plaintiff’s claims, ordered the defendant to stop the infringing acts and to compensate the plaintiff for its losses.

In this case, it was possible to use a 2D trademark registration, which represented an object (the bottle) as a 3D trademark covering the shape of the bottle. This is an exemplary case, which can serve as a model for the future.