Supreme Court of Appeal issues decision on cloning and counterfeiting

Print article
South Africa
Legal updates: case law analysis and intelligence
In Puma AG Rudolf Dassler Sport v Rampar Trading (Pty) Ltd (Case 59/10, November 19 2010), the Supreme Court of Appeal of South Africa (SCA) has upheld Puma AG Rudolf Dassler Sport's appeal in what is likely to be a landmark case.
This decision was not easy to predict: the SCA had held against Puma in favour of copycat Global Warming just over a year ago (for further details please see "Puma defeated in 'copycat' shoe case"), and a statement in the recent Cadac case (for further details please see "SCA considers inquiry into damages sought in motion proceedings") would have had the bookies trading bets against a decision in Puma’s favour. However, the SCA itself stated in the present case that “[t]he interpretation of the Counterfeit Goods Act remains contentious”.
About a year ago, Puma had caused shoes imported by Rampar Trading (Pty) Ltd, a local shoe retailer, to be detained on suspicion that they were counterfeit. Below are pictures of Puma's 'split form' trademark and of the shoes: 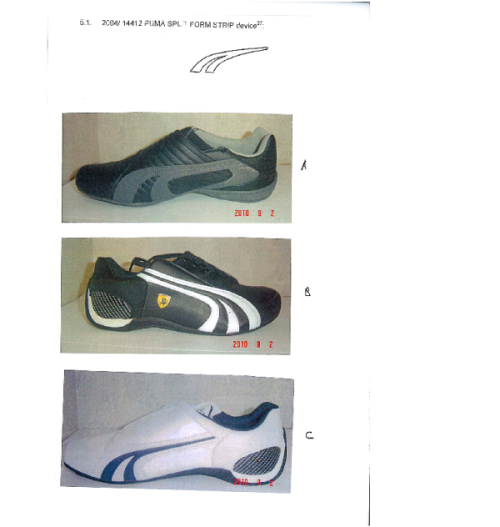 Rampar sought a declaration that the goods were not counterfeit, and achieved success in the lower court. Two issues arose then, and subsequently on appeal:
With regard to the cloning issue, the SCA helpfully set out the applicability of different sections of the act to different forms of counterfeiting, namely those involving copyright, trademarks and certain merchandise marks. The SCA concluded that cloning is not required, but not before dealing with its statement in Cadac - it simply said that the potentially debilitating sentence (quoted below) was “in another context to make a different point”, without elaborating:
"Counterfeiting involves deliberate and fraudulent infringement of trademarks and ‘counterfeit cases involve an infringer attempting to reproduce - and substitute for - the goods (not just the trademark) of the trademark owner." [ie, cloning is required]
The SCA could have said that 'goods' in this sentence (quoted from Cadac and the English case of R v Johnstone) should be interpreted in South Africa to mean 'protected goods', as defined and interpreted by the SCA in the judgment, but chose not to. It is the second definition of 'protected goods' in the Counterfeit Goods Act that the SCA relies on to find that counterfeiting extends to notional goods (ie, cloning is not required).
In Paragraph 19 of the decision, the SCA described a trademark right as a positive right by defining notional goods as “goods to which the owner could have applied the trademark” - this may end any debate in South Africa as to whether the nature of a trademark right is negative or positive.
The concept of notional goods extends to a 'class of goods' in respect of which the IP right can be applied “only with the authority of the owner of the IP right” and, therefore, could include all infringing goods - that is, not only those in respect of which the IP right is used, but all infringing uses which, in the case of a registered mark in Class 25 of the Nice Classification, could be sporting equipment, holdalls or protective clothing. This is obviously good news for brands faced with counterfeiting.
The second issue was not considered in the lower court and the road was left open for the SCA. Since counterfeiting, by nature, involves the infringement of a registered mark, it follows that, if there is no trademark infringement, there cannot be counterfeiting - there must be more. The SCA confirmed this, somewhat ironically quoting Cadac:
“That is why it [a counterfeit] must be 'calculated to be confused with' or 'taken as being' the registered mark and why it involves deliberate and fraudulent infringement of trademarks.”
Rampar attempted to distinguish the reproductions of the registered mark on its shoes and argued that it was likely to be seen as decorative use or mere ornamentation, and not as a trademark. The SCA disagreed on both counts.
The SCA felt that additions to the registered mark on the shoes were “at best subsidiary, and do not touch the essence of the [registered] split form strip”. It is worth analysing the differences between the three shoes in this case and the registered mark(s) against the shoes and the registered mark(s) relied on the Global Warming case to get the benefit of the judgment.
One will also wonder why Puma did not rely on its split form trademark in the Global Warming decision - it is understood that this is because the mark had not been registered at the appropriate time. Had Puma obtained the registered mark, Global Warming's position is likely to have changed from legitimate copycat to counterfeiter following the SCA reasoning, illustrating both the need to register trademarks and the fine line between legitimate business and criminal activity.
Importantly, the SCA stated that one cannot “use a [registered] trademark and then argue that it was used as ornamentation”. It then cleared up some possible confusion with Paragraph 6 of the Global Warming judgment by stating that:

“ [i]t could be different if one is dealing with the changes to the mark, for instance, if the registered mark consists of three stripes, it would be a question of fact whether the use of two or four stripes would be perceived as decorative or as trademark use.”
The court thus upheld the appeal.
This case provides a useful interpretation of the Counterfeit Goods Act and is likely to be welcomed by brand owners faced with counterfeiting problems, because it clarifies that no cloning is required to get the benefit of protection under the act. The judgment admits that it is unclear whether the second definition of 'protected goods' could be applied to copyright piracy, so clarification is still required.
The case is also notable for its speed - any matter to reach a decision in the SCA in just over a year is exceptional.
Darren Olivier, Bowman Gilfillan Inc, Johannesburg