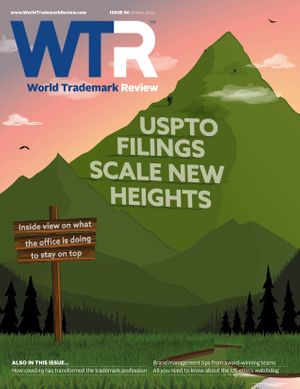 The United States has experienced another record-breaking year in terms of trademark filings, in part due to a flurry of applications from Chinese-based businesses. But this is both good and bad news for rights holders.

Unilever takes to the streets to spread the trademark message

Viji Malkani, senior legal manager IP rights, brand protection and legal counsel foods at Hindustan Unilever Ltd, reveals how WTR’s Asia-Pacific Team of the Year team has upheld IP integrity in the face of increasing pressures and why educating the younger generation has become part of their work ethos.

Jaguar Land Rover’s recent prosecution successes send a clear message on how seriously the company considers its IP protection – earning the group tasked with such efforts the WTR Europe, Middle East and Africa Team of the Year Award.

Preparation and collaboration: the cornerstones of any successful brand strategy

Carnot Laboratorios general counsel Antonio Donatlán Herrera reveals how his team handled the IP intricacies of a multinational brand launch in an industry where the threat of counterfeits is a threat to human health.

Business integration is at the heart of Discovery’s IP successes

David Modzeleski, senior vice president, intellectual property and litigation and chief global IP and trademark counsel at Discovery, discusses how WTR’s North America Team of the Year prioritises a seat at the table to justify an aggressive trademark strategy.

After collaborating with major brands on an advertising campaign to raise awareness of the trade in fraudulent personal protective equipment, it is little wonder that the Tommy Hilfiger IP group has been recognised as WTR’s Fashion, Cosmetics and Luxury Goods Team of the Year.

We reflect on the innovative steps that earned Mastercard the title of this year’s WTR Financial and Professional Services Team of the Year.

José Checa, general counsel brand and marketing properties at Nestlé, reveals the role that his team played in some of the company’s biggest successes of late.

“The quality of the names is crucial”: Novartis’ top tips for pharma branding success

David Lossignol, head of the pharma legal brand IP team at Novartis, reveals how he managed to juggle the 2019 INTA presidency alongside increasing duties at the company, to earn his operation the WTR Healthcare and Life Sciences Team of the Year Award.

From tackling counterfeit face masks to handling multiple M&As and raising awareness in collaboration with the NFL, the WTR Household and Consumer Goods Team of the Year has had a mammoth 12 months.

How the Verizon team protects the foundations of its branded house

WTR gets the inside track on how Verizon’s trademark department, named Internet and Telecommunications Team of the Year at the 2020 WTR Industry Awards, approaches brand management in the face of opportunists and a rapidly evolving field.

For the second year in a row, the Scotch Whisky Association has prevailed as WTR’s Not-for-Profit Organisation Team of the Year. Deputy director of legal affairs Lindesay Low discusses the strategy behind the group’s multiple successes over the past 12 months.

How to increase brand protection engagement: top tips from an award-winning company

Dana Brown Northcott of Amazon.com shares her insight on the part played by the trademark team in yet another record-breaking year for the cyber giant, and how dedication to the end consumer has been a recipe for success since day one.

Entertainment One’s senior director of brand protection, Niall Trainor, reflects on a year dominated by a major acquisition and reveals the key factors that led to his side winning WTR’s Sports, Entertainment and Media Team of the Year Award.

Assistant general counsel Suchi Somasekar explains how Western Digital has continued to engage internal and external stakeholders while dealing with “an explosion of online counterfeits” – earning his side the title of WTR’s Technology and Consumer Electronics Team of the Year.

Tami Collie of InterContinental Hotel Group – winner of the WTR Industry Award for Travel and Leisure Team of the Year – reveals how respect and collegiality are helping the trademark team to tackle a bold new acquisition while weathering the hit from covid-19.

Lita Silje Schmitz, head of global IP enforcement at Daimler IP, reveals how the group’s extremely collaborative set-up is its strongest weapon in the fight against fakes – earning it the 2020 WTR Industry Award for Vehicles and Transport Team of the Year.

“There must be something about trademarks that draws wonderful people to the field”: celebrating Mary Boney Denison's award-winning career

WTR caught up with retired USPTO commissioner for trademarks Mary Boney Denison to discuss her prominent career and the experiences that led to her being officially awarded the Lifetime Achievement accolade at the 2020 WTR Industry Awards.

A year of covid-19: the trademark community reveals how 2020 could shape the industry’s future

As an unprecedented year comes to an end, trademark practitioners from around the world share their highs and lows from the past 12 months, as well as the lessons that they have learned in order to adapt to the new normal.

Across two weeks in October, the WTR Connect online event brought together trademark professionals from more than 67 countries for a series of keynote addresses, virtual fireside chats, open discussion forums, strategic masterclasses and closed-door boardroom discussions. Below we present some of the key takeaways.

Brexit: the long and winding road is not over yet

The transitional period may be over, but the Brexit saga is not. There are now numerous factors for trademark owners to bear in mind, with a host of new rules to become accustomed to.
Lee Curtis and Suzan Ure

Navigating the Kenya trademark landscape: what the future holds after recent developments

The Intellectual Property Bill 2020 is only the latest in a series of developments that rights holders need to know about when building their brands in Kenya.
Lorna Mbatia and Brenda Vilita

Five years on: the current state of non-traditional marks in Japan

Half a decade after the law was changed to allow the registration of non-traditional marks, application numbers have dropped dramatically. A breakdown of the figures and exclusive insight from representatives of the Japan Patent Office provide clues as to the future of such marks in the country.
Kensaku Takase and Yuka Matsuzawa

Decoding the nuances of ethical trademark practice before the USPTO

A worrying number of trademark attorneys remain unaware of the USPTO’s Office of Enrolment and Discipline, let alone that they are subject to its rules – and could face disciplinary action for violating them. But whether the trademark bar knows it or not, the office is always present.
Emil J Ali and Michael E McCabe Jr

Fame in South America: how to establish and wield well-known status

Renown is a powerful tool for trademark practitioners, but when seeking to establish and utilise it in Central and South America, local nuance is all important.
Juan Carlos Ojam , Philippe Bhering , Max F Villaseca M , Ximena Castellanos and Martín Michaus

Perfectly positioned: how Mexico has established itself as an IP leader in Latin America

Data analysis reveals that the Mexican registry boasts an impressive roster of valuable brands – aided largely by an advanced system that has proved attractive to the country’s northern neighbours.
Bridget Diakun

Weathering the pandemic and protecting the register: 2020 at the USPTO

The past year has been, in the words of trademarks commissioner David Gooder, a “bumpy ride” as the USPTO managed its way through the pandemic. Here, he explains how the office has adapted to change and provides an update on key areas of focus and achievements over the past 12 months.
David S Gooder

Hard-working representatives from registries in Canada, France, Singapore, the United Kingdom and the United States reveal what makes them tick and how to guarantee a successful trademark application in their jurisdiction.
Jonathan Walfisz

My name, my face, your trademark? Protecting publicity and image rights in China

China
Kangxin Partners PC
A series of high-profile cases has seen publicity and image rights in the spotlight in recent years. Although the laws protecting these rights can be broad, a well-thought-out strategy with evidence of reputation will see celebrities triumph over bad-faith filers.
Brandy E Baker

EU image rights: when the product is us

European Union
Bugnion SpA
In the absence of a harmonised EU law on image rights, individuals are forced to rely on a combination of copyright and human rights claims to protect their most unique asset online – their own image.
Vincenzo Melilli

Mexico
Uhthoff, Gómez Vega & Uhthoff
With image rights protected mainly by the Federal Copyright Law, the overlap between an individual’s right to control use of their image and the automatic copyright established on behalf of an author can lead to courtroom conflicts.
Marina Espitia

How to protect your most valuable rights: publicity and image

Turkey
Kenaroğlu Avukatlik Burosu
With millions of images shared online every day, striking a balance between the rights of the individual and freedom of expression is a complex task. Thankfully, various regulations can offer protection in the absence of specific publicity and image rights.
Yasemin Kenaroğlu and Gökçe Dağdaş

Social media and the right of publicity: what advertisers need to know

United States of America
Lewis Roca Rothgerber Christie LLP
With no US federal right of publicity and the distinction between celebrities and non-celebrities becoming increasingly arbitrary, companies looking to advertise their products through the likenesses of individuals must be up to date with the latest case law in order to get a clear picture of the risks involved.
Jennifer Van Kirk and Rachel Nicholas